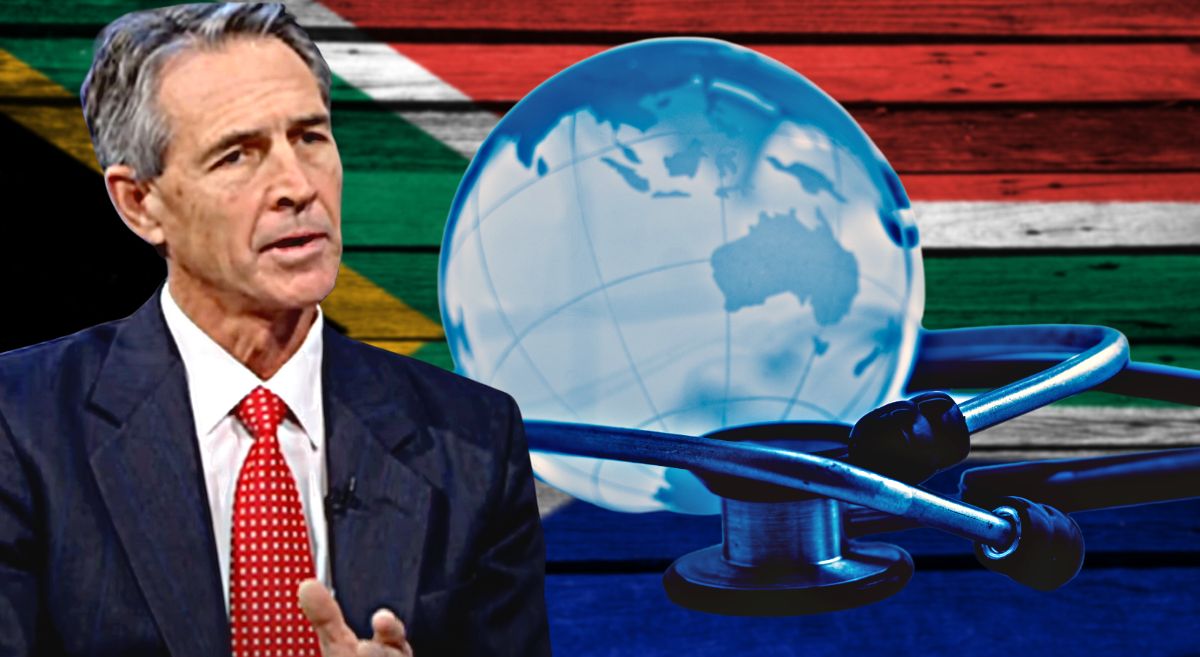 The proposed National Health Insurance (NHI) and the man driving what is perceived to be a potential death knell for healthcare in South Africa, Dr Nicholas Crisp, has been a sore point for many South Africans. Crisp, the director-general of health, has been pushing the ‘universal healthcare NHI’ agenda as an idyllic, practically feasible way to ensure equal healthcare for all South Africans, much to the dismay of those who see it for the promotional ploy it is. Earlier this month, at the annual Hospital Association of South Africa (HASA) conference, Crisp gave “an amusing and often contentious off-the-cuff “NHI 101” presentation”. In his own words, Crisp believes the country needs NHI to provide “one big pool, which we can afford by spending the current 8.5% of GDP on health far more wisely”. Already, the mere fact that Crisp believes these funds are capable of being spent wisely in a country with our track record greatly diminishes his credibility. This article first appeared on Medical Brief.– Nadya Swart

A ‘Crisp’ rendition of SA’s NHI

The former was the consensus among private hospital group executives, healthcare activists and health economists who highlighted the unprecedented co-operation between the private and public healthcare sectors when waves of the Covid pandemic threatened to overwhelm the country’s hospital capacity, writes Chris Bateman for MedicalBrief.

Crisp challenged his audience by asking how many of them had actually read the NHI Bill, (exposing a smattering of hands in the packed hall), before asking how many delegates had read past the “end of the Bill to Schedule One,” revealing even less assent from his audience.

“The bottom line is most people have no clue what the NHI is about and rely on the media and social media for their information,” Crisp asserted.

He said South Africa had the worst Gini-coefficient in the world, which cried out for a single, universal system that made quality healthcare access equitable and more affordable. Crisp defined an NHI simply as “every person getting the help that they need when and where they need it, without financial hardship”.

“How you do it depends on your resources, on the economy at your starting point and in the foundation of your services and human resources. That definition of NHI is the World Health Organization’s, (WHO), not mine. You have to ask how many people with medical aid end up with severe financial hardship because they didn’t quite plan to have cancer this year, or had an accident, or got pregnant and experienced complications. A full 49% of people on medical aid run out of benefits by September,” he said.

Crisp, a seasoned public health expert who has worked in most of South Africa’s public sector areas and consulted on implementing universal healthcare systems in Cuba, Mexico and on the African continent, illustrated the “craziness” of SA’s current split healthcare system with an anecdote from when he was living, semi-retired, in a remote local farming area before reluctantly returning to service relatively recently.

“A GP lived 50km from our house, but the nearest medical aid-accredited GP was 110km away. So, if I wanted to use my scheme, I had to travel 110km. That’s crazy. We have a two-year waiting list for prostate cancer treatment in the public sector. You heard earlier what happened in Durban, where there wasn’t a single public sector paediatric oncologist. The resources are there … with universal health coverage we need to harmonise and break down these inequities and avoid the revolution we were talking about,” he said.

He was alluding to an earlier panel discussion where three Disaster Medicine hospital group chiefs and one provincial public sector Disaster Medicine physician agreed that their biggest nightmare was a widespread repeat of the July 2021anarchy in KwaZulu-Natal.

In the view of Crisp and many others, healthcare is not a “tradeable commodity,” but a public good.

He said there were three things the state had to ensure for everyone, or face the lack of a working economy: “You must be able to read and write and operate machines. Now if you’re unhealthy, you cannot interact and be secure. We have to take responsibility for that. Part of it is that people don’t like those who have access to resources, so the (NHI) foundation is a single risk pool. What we currently have is one national Health Department, nine provincial ones and 76 medical schemes with vastly differing packages. It’s not efficient.

“The private sector spends 15% on administration before anything else … brokers, administrators, etc. Then how many times do you get blood tests and X-rays repeated as patients are referred over and over? What happened to continuity of care? We need to know exactly what meds a patient is on, what the outcomes were. Where is this published in the private sector? Even with infections, it isn’t. The Health Care Inquiry said the private sector was not accountable. So, what we need is one big pool, which we can afford by spending the current 8.5% of GDP on health far more wisely. Our peer countries spend 5.6% of GDP on healthcare and their indicators are better than ours – whether it’s maternal, infant and child mortality – the stuff that matters in society. Meanwhile, in the private sector we have the highest incidence of tonsillectomies in the world, and with 72% of all C-sections done in the private sector,” he added.

Besides a single pool of resources, the next basic tenet of NHI would be a purchaser/provider split where all providers were essential.

“The government is not interested in taking over from private GPs and hospitals – but it is interested in buying services from the public and private sector. Why should people living in Diepsloot have to drive past several private hospitals to get to Charlotte Maxeke Hospital? Why not just go to the nearest hospital? We’re talking just 14 minutes in a car and 11 minutes in a taxi – that’s what this is about,” he said.

Crisp mentioned the conference’s opening speaker, Gift of the Givers’ founder Dr Imtiaz Suliman, who received a standing ovation for his passionate explanation of how his NPO provided support for both sectors during the Covid pandemic.

Suliman said that initially, the government insisted on memorandums of understanding before it would let his organisation provide vital emergency assistance. But Crisp pointed out that he doesn’t report to an Auditor-General or Parliament. He doesn’t have to have a mandate in law. “We can’t just spend your money. The Health Department has to ask Public Works to drill a borehole, and if you don’t get water, it’s cited as ‘fruitless expenditure!”  Crisp said.

An NHI would provide benefits at fair prices to both patients and practitioners, plus devices and diagnostics at benchmarked prices, with a single data warehouse that had built-in anti-fraud programmes, and an office for product procurement that would elicit huge savings in bulk purchases. A single formulary already had 1,200 medicines listed, to which devices and diagnostics would be added.

“That means everybody who is NHI-accredited could buy and dispense those products,” he said.

Currently, the private sector pays 30 times more for provisions than the public sector, because of its smaller economies of scale.

Crisp said the Covid Electronic Vaccination Data System (EVDS) had been developed in less than three weeks and would be further refined for NHI use – without any change in budget costs. He warned private hospital groups that their systems would “need to be inter-operable, if you want to be accredited. We need to link to everyone, not just 8.6m medical scheme members – and that record needs to be portable, so when patients among our 60m population move from hospital to hospital, their entire medical history goes with them. We don’t want patients with two appendectomies or C-sections done on men,” he joked, alluding to examples of private sector patient fraud claims.

The state biometric system would be “designed by those who work in fraud,” he said. He reminded the audience that South Africa was globally praised for its Covid vaccination roll-out with 37.5m doses administered, 6m of them by private pharmacies alone. Crisp is in charge of the Covid operational programme but is now turning his attention back to his primary task: implementation of the NHI.