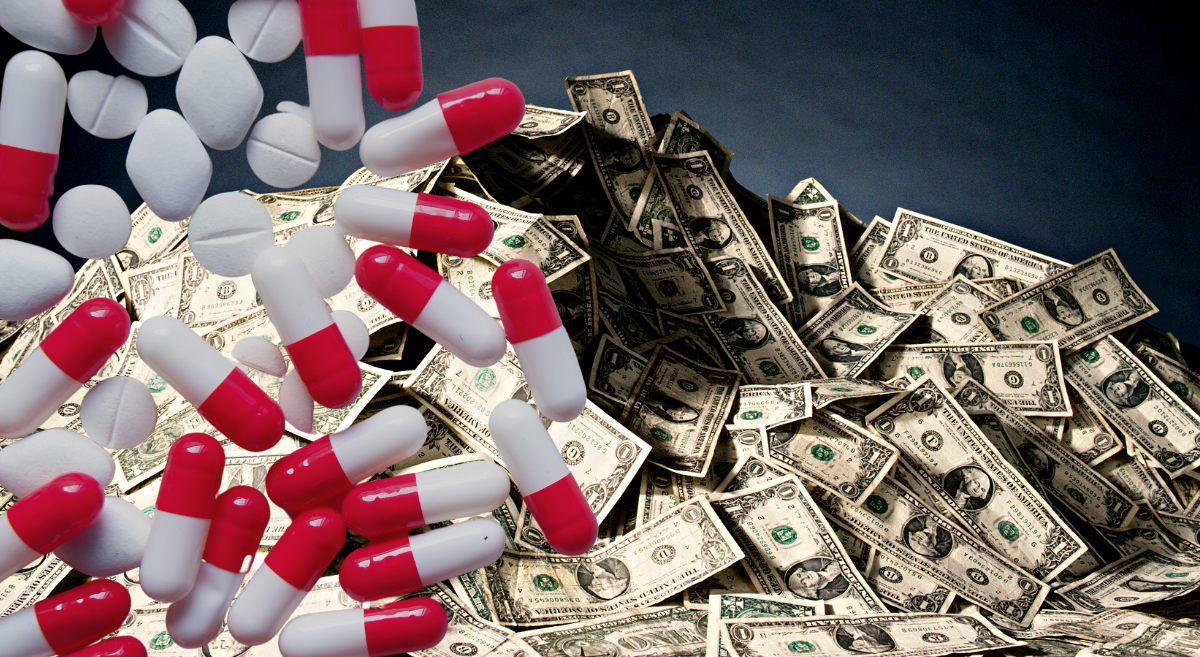 In July, the serotonin hypothesis of depression, which attributes depression to a chemical imbalance in the brain, was critically called into question by a group of scientists, led by principal investigator Dr Joanna Moncrieff. The UCL study published in the Molecular Psychiatry Journal found no evidence supporting the chemical imbalance theory, and shook the psychiatric profession and long-held beliefs of millions of SSRI dependent people across the globe. It was the drugmakers, however, to whom the study’s findings posed the most insidious threat. As indicated in this article, “Thanks to the new chemical imbalance of serotonin theory of depression, drugmakers had a formidable new franchise; doctors, a ready-made, patient-pleasing tool; the media, reliable new advertisers; and Wall Street, hot new stocks — all almost overnight.” Disgracefully, the ever-expanding list of DSM mental disorders – authored by Big Pharma funded individuals – coupled with an often painful withdrawal from SSRIs appear to be powerful enough to keep the status quo intact and, as such, Big Pharma’s profit-driven trajectory unperturbed. This article first appeared on The Defender. – Nadya Swart

By The Epoch Times

“Lexapro appears to relieve the symptoms of depression and anxiety by increasing serotonin,” says an ad on the Bonkers Institute, a website that archives drug ads and also satirizes pharma claims and shaky science.

“Zoloft works to correct a chemical imbalance in the brain which may be related to symptoms of depression,” another ad says.

“Paxil CR blocks serotonin from being reabsorbed back into the sending nerve cell. This process increases the availability of serotonin to the receiving nerve cell and may help message [depression] transmission return to normal,” a third ad says.

As many Epoch Times readers may have heard, the serotonin “chemical imbalance” theory of depression was recently put to rest by a group of University College London scientists in the journal Molecular Psychiatry.

After reviewing decades of research, there’s no evidence that serotonin levels or serotonin activity are responsible for depression, they wrote.

In other words, the theory that was the basis for selective serotonin reuptake inhibitor (SSRI) antidepressants and their tremendously profitable franchise was false.

While the theory has been questioned by scientists for decades, Molecular Psychiatry research seems to be the final nail in the coffin for the theory — a technical knockout.

“The popularity of the ‘chemical imbalance’ theory of depression has coincided with a huge increase in the use of antidepressants,” said the article’s lead author, Joanna Moncrieff, a professor of psychiatry at University College, London. “Prescriptions for antidepressants have risen dramatically since the 1990s.”

“Thousands of people suffer from side effects of antidepressants, including the severe withdrawal effects that can occur when people try to stop them, yet prescription rates continue to rise.”

“We believe this situation has been driven partly by the false belief that depression is due to a chemical imbalance. It is high time to inform the public that this belief is not grounded in science.”

It’s hard to overestimate the medical, financial, and sociological consequences of the chemical imbalance theory, which propelled the 1987 U.S. Food and Drug Administration (FDA) approval of the SSRI antidepressant Prozac and which is still followed to this day.

Several years ago, Harvard Health Publishing estimated that about 1 in 4 American women in their 40s and 50s were taking antidepressants.

Thanks to direct-to-consumer marketing (or “mongering,” as some say) about depression, people with life problems or occasional bad moods absorbed the chemical imbalance messaging, diagnosed themselves with depression and presented themselves to doctors’ offices.

Family, job, health, money, or housing problems were no longer a reason for feeling down or defeated, suggested aggressive SSRI advertising campaigns; if you were depressed, you had a chemical imbalance — regardless of whatever else may have accounted for your depression (such as the loss of meaning and social connection often observed in modern society).

Whereas the antidepressants that preceded SSRIs, some called monoamine oxidase inhibitors, were connected to neurotransmitters in the brain such as serotonin, dopamine and norepinephrine, SSRIs reduced the chemistry to a simple problem-solution equation, which the public readily bought.

Thanks to the new chemical imbalance of serotonin theory of depression, drugmakers had a formidable new franchise; doctors, a ready-made, patient-pleasing tool; the media, reliable new advertisers; and Wall Street, hot new stocks — all almost overnight.

Worldwide sales of SSRIs have been estimated to soar as high as $18.29 billion by 2027.

Psychiatrists and the American Psychiatric Association (APA), which is highly funded by drugmakers — 70% of authors of the APA’s Diagnostic and Statistical Manual of Mental Disorders Fifth Edition were drugmaker funded, as reported by ABC news — were among the first to push back against the Molecular Psychiatry article.

Chief among protestations were “we never promoted the ‘chemical imbalance’ theory”— no, you let drug makers do that, cynics might say — and “no one really understands why or how antidepressants work.”

The “third rail” for drugmaker-funded practitioners is the suggestion that mental illness may not be from physical conditions at all.

As Mark Horowitz, co-author of the Molecular Psychiatry article, put it, “One interesting aspect in the studies we examined was how strong an effect adverse life events played in depression, suggesting low mood is a response to people’s lives and cannot be boiled down to a simple chemical equation.”

If depression comes from stress, trauma, grief, loneliness and social conditions such as poverty, as Horowitz suggests, it wouldn’t be amenable to medication treatment.

Worse, if it weren’t a permanent chemical imbalance as the serotonin theory of depression implies, it wouldn’t turn into lifelong medication prescriptions, which drugmakers seek and treasure the most.

“Although viewing depression as a biological disorder may seem like it would reduce stigma, in fact, research has shown the opposite, and also that people who believe their own depression is due to a chemical imbalance are more pessimistic about their chances of recovery,” Moncrieff said.

Psychiatrist Peter Breggin, who has been called the Conscience of Psychiatry, elaborated on this idea to The Epoch Times:

“Since the ancient Greeks, physicians have wanted to believe that mental and emotional distress must have biological origins. That allowed them to include ‘mental diseases’ within their specialty.

“With the development of massive drug company involvement in routine psychiatric practice during the advent of the antipsychotic drugs in 1954, drug companies also began pushing the biochemical and biological basis of human experiences such as anxiety, depression, manic-depression (now bipolar-disorder) and schizophrenia.

“Then, in the late 1980s, in anticipation of the approval of Prozac for depression by the FDA, Eli Lilly and Company conducted an international advertising campaign claiming that depression is caused by a biochemical imbalance in serotonin. It was apparent from the start that this was pure fantasy.

“In my books and scientific articles as far back as 1983, I pointed out the continuing truth that there are no known biochemical imbalances in the brains of mental patients until they are put there by the neurotoxic effects of all psychiatric drugs.

“Now, a review article by British psychiatrist Johanna Moncrieff has reconfirmed that research fails to show any connection between depression and abnormalities in serotonin metabolism in the brain.

“No so-called ‘mental illnesses’ are known to be genetic or biochemical in origin — it’s all medical and pharmaceutical company hype.”

Breggin and his wife, Ginger, wrote the new book “COVID-19 and the Global Predators: We Are the Prey.”

Whether they believe SSRIs are specious and over-prescribed or valuable treatments, clinicians warn patients not to stop the drugs abruptly.

In 2018, The New York Times exposed that SSRI antidepressants can be difficult to quit and downright addictive (though drugmakers prefer to call the addiction effects a “discontinuation syndrome”).

Some patients say they weren’t warned by their doctors that they may be indefinitely parked on the drugs because of the side effects such as dizziness, nausea, headache, and brain zaps that they experience when trying to stop the drugs, the newspaper reported.

Brian, a 29-year-old Chicagoan who asked not to give his last name, said that he has remained on an SSRI antidepressant for years despite his wish to quit.

“Every time I try to stop, I get something that feels like an electrical current in my head, and I can’t do it,” he said.

The NY Times article drew a huge backlash from psychiatrists.

“By amplifying the social media echo chamber, the article creates the unfortunate impression that most patients are forced to continue antidepressants out of fear of withdrawal rather than out of prevention of recurrence,” read a letter to the editor signed by a group of 39 psychiatrists, who termed depression as “chronic” and “undertreated.”

At least 35 of the letter signers were affiliated with Columbia Universityʼs College of Physicians and Surgeons, an institution that received a $250 million gift from former Merck CEO Roy Vagelos and his wife, Diana, in 2017.

Since their original marketing, SSRI antidepressants are also now known to increase bone loss and fracture risk, as well as the risk of the dreaded intestinal condition of Clostridium difficile.

Then why do SSRIs work?

It’s generally agreed that SSRI antidepressants sometimes work, though not impressively and not for all patients.

According to a follow-up paper by Moncrieff and Horowitz, “Any drug that changes normal brain activity is likely to have some impact on mood, and … by virtue of changing brain chemistry, antidepressants also produce changes to normal mental activity and experiences.”

Antidepressants also cause numbing of the moods, the researchers say — “including not just sadness and anxiety but welcome emotions like happiness and joy” — which can reduce depression scores, making the drugs appear to be effective.

A paper in the Springer journal Inflammopharmacology suggests a possible SSRI mechanism could be decreasing “neuroinflammation [in the brain] through multiple mechanisms including the reduction of blood or tissue cytokines or regulating complex inflammatory pathways.”

Whatever the explanation, it remains true that other methods to treat depression, including exercise and cognitive behavioral therapy, have proven efficacy with additional benefits and no side effects.

Even as the premise through which millions of Americans were put on psychoactive drugs has been demolished, raising questions about the interface between medical care and misleading drug marketing, some news outlets have sought to politicize the contretemps.

“First, we were told that SSRIs would save lives. Now, we learn they don’t actually work as intended. In fact, the whole idea behind the drug was completely wrong. And yet — and here is the best part — people are ignoring this news and the drugs are still being prescribed.”

Rolling Stone magazine published a hit piece portraying Moncrieff as a conspiracy nut with a history of criticizing the over-medication of mental conditions and attributing some mass shootings to psychoactive drugs.

The article, “Who Is the Psychiatrist Behind the Antidepressant Study Taking Over Right-Wing Media?” reveals the 180-degree turn that progressive outlets have taken toward drugmakers since COVID-19 — forgiving and forgetting original distrust of corporatism, capitalism, monopolies and the drugmaker-caused opioid scourge — in order to be able to demonize rivals.

Reprinted with permission from The Epoch Times.

*Martha Rosenberg is a nationally recognized reporter and author whose work has been cited by the Mayo Clinic Proceedings, Public Library of Science Biology, and National Geographic. Rosenberg’s FDA expose, “Born with a Junk Food Deficiency,” established her as a prominent investigative journalist. She has lectured widely at universities throughout the United States and resides in Chicago.