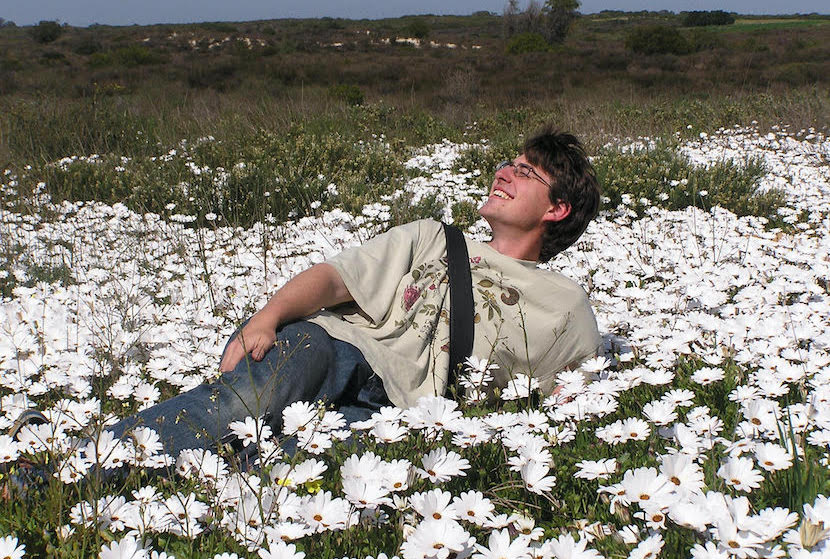 In Episode 16 of his new book, author Julian Roup celebrates the power of nature in this time of Covid-19.

Tonight BBC Radio 3 will broadcast a ‘Nightingale Concert’ from a Hornbeam wood near Lewes in East Sussex, ten miles south of us, where seven nightingales have been making the night loud with their song this strange spring.

The birds will be joined by classical musicians in the broadcast, and by nature writer, Robert Macfarlane and other writers and poets. They will be part of the human sounds joining the seven nightingales that tune up at 10pm each evening, singing from a blackthorn bush in the wood, joining hope and beauty and music in the cycle of life in this dark, sunlit spring.

I wonder, where is Tim Dee when he is needed? I am so enjoying the prose poem that is his wonderful book of spring and bird migration, titled ‘Greenery’. I send news of this event to my sister Jay and brother-in-law Guy in Cape Town and to naturalist Tim Dee, who is without doubt one of the UK’s most eminent nature writers.

I know Jay and Guy, keen bird watchers, would give their eye teeth to hear this concert, and I send them links to it. They are connected to Tim through his wife, the ornithologist, Claire Spottiswoode, a close friend of their late son, Kirsten Louw, an ornithologist-botanist who died tragically young at 26, while studying for his doctorate at the University of Cape Town. But his name lives on through all those whose lives he touched, Claire among them. And also in the name of a rare Cape flower that he identified, ‘Ornithogalum Kirstenii’ and brought to the attention of the world of botany. It now bears his name. So in a way, the nightingales will be singing, unbeknown to them or their audience, a requiem for Kirsten, my lost nephew, thanks to the small South African audience I have alerted to the concert from the Hornbeam wood, Jay, Guy, Tim and Claire.

This morning, the Covid-19 news is led by word of the RAF flight that has finally brought in half the PPE kit from Turkey which is so desperately needed by nurses and doctors here in the UK. Thank you, Turkey!

The news also spotlights the fact that the UK opted out of a European Union joint purchasing drive to get PPE, for Brexit led political reasons. The Government are falling over themselves to deny this and say the spokesperson on this issue ‘misspoke’, that treacherous slime of an excuse embodied in a word whose darkness underlines misdeeds wherever it is used.

It is becoming clear that death rates are statistically confusing. The average age of populations, its geographic density, its size, and the presence of international business and international airports, are all relevant when looking at deaths per 100,000. So the US and Britain slide down from the top slots to seventh and twelfth places it would seem. The statisticians will doubtless be arguing over this for decades.

Meanwhile, anti-China propaganda is ramping up on social media at a rate of knots. Last night I received a conspiracy theory video asking why the virus did not go viral in China. Despite the fact that the country’s two major cities, Beijing and Shanghai, are not far from Wuhan province where it originated, neither city was affected, says the video, even as the virus has run rampant in every country on earth. The video suggested that Covid-19 is a laboratory-manufactured tool, designed to undermine every economy on earth in order to give China increased global dominance. It was debunked almost as soon as it appeared. The fact that the Chinese provided the genetic structure of the virus as soon as they had it decoded is not mentioned.

The Covid-19 virus has unleashed another virus, this time man-made, the rumour mill is working at capacity, full tilt, night and day. Conspiracy theories abound and there is a glut of charlatans on the market, going so cheap we can all afford one of our own choice. They are a dime a dozen, which is not to say they are not dangerous. The world just now can ill afford them. And the internet, so wonderful in so many ways, provides an instant global platform for the ranter as well as the mot sophisticated academic with impeccable credentials whose views skewed by politics are as dangerous as they seem credible.

On the home front, it is becoming clear that I am going to be in lockdown for at least another month or two, so I arrange to pay Georgie to look after my horse Callum for another month, and buy in another load of of wood shavings for his bed. I miss riding a lot, especially in this glorious weather.

Last night, once again, we turned to our favourite TV series: ‘Ray Donovan’ which is life-enhancing in two respects: it takes our mind off our own troubles, and in comparison to the challenges Ray Donovan faces in each episode, our life looks quite peachy.

I issue a story for a client about a 1981 Austin Maxi, a very ordinary family sedan which has one thing going for it, just 8,700 authenticated miles on the clock since new, which may appeal to some collectors.

Almost immediately after issuing the press release, I get an amused email from Simon de Burton, one of Britain’s most distinguished writers on classic cars. What he tells me about the Austin makes me smile. He mentions one plus point I missed – the car’s seats fold flat, providing a reasonably large bed. He sends me the following review of the car from a motoring magazine from 1981.

“The new Austin Maxi, announced last week, is not a car which we as enthusiasts are likely to rush out and buy, but there is little doubt that British Leyland have produced a car which will appeal to the family man. We never got excited about the Austin A60, for instance, but it has found a huge sale amongst the non-enthusiastic driver. The Maxi, though it supplements the range, is a very great improvement on the A60 type of car. One feature we did not expect to find on the car was a five-speed gearbox—such luxuries usually only being found on Porsches and the like. We came to the conclusion that there will be a Joe Muggins somewhere who buys the car but who never even discovers fifth gear or at least never gets into it.”

I think to myself that one man’s bread is another man’s poison, it will be interesting to see what the car sells for. The pre-sale estimate is £3,500 to £4,500. If this mad time has taught me anything it is that there is no knowing how people will react to something. The only sure bet is that there will be disagreement.

Life goes on. Or not. The NHS is concerned that numbers attending hospital for non Covid-19 related illness, cancer or heart or liver issues, has fallen by 70 per cent. People will die at home for fear of seeking help at hospital.

Parliament has re-opened today with a thin spread of MPs on the green leather benches in the house while others attend via the internet. It is Wednesday, so it is Prime Minister’s Question Time, the first led by Sir Keir Starmer, QC, human rights lawyer, and the new Labour leader. He asks his questions in a grave, forensic way about why the Government has been behind on every issue facing it with Covid 19 – on testing, PPE, timing of the lockdown, and deaths in care homes. Dominic Raab, the Foreign Minister standing in for Boris deals with the cross questioning as best he can, which, let’s face it, is not all that good.