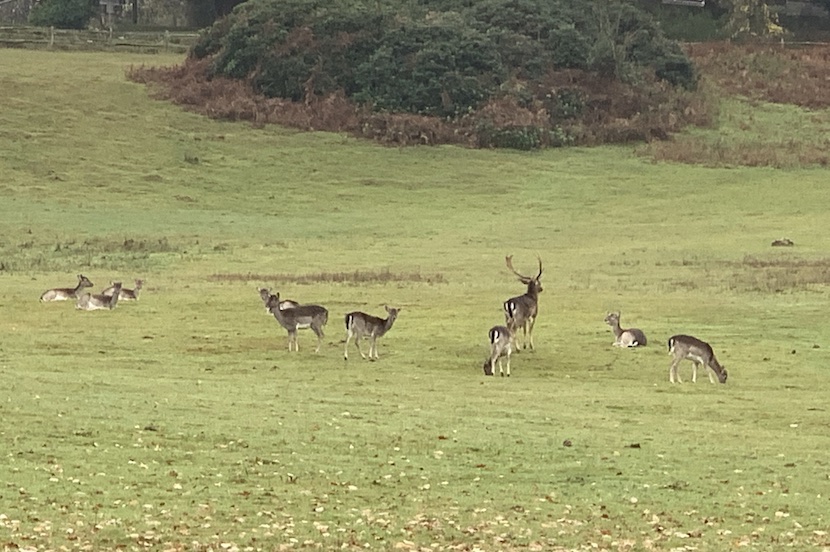 In Episode 44 of his new book, author Julian Roup observes the rewilding of the world in Covid-19 lockdown.

Nature hates a vacuum, and as man has withdrawn from the countryside and large parts of the world’s cities because of the threat of Covid-19 infection, the animal world has moved in, almost as fast as the tide racing across Morecambe Bay – at the pace of a swift horse.

With more than half the global population under lockdown due to Covid-19, our cities have become shadows of their former selves. There is an echoing emptiness amid the glass and concrete towers and on the black tarmacked roads and highways. For some animals, it’s proving the perfect opportunity to go and explore. Here in the UK, in the Welsh coastal town of Llandudno, shy wild mountain goats have ventured into the empty streets to see what kind of new foraging is available with humans absent from their town centre.

There is a deep and age-old wish in humans to return to Eden. We see this instinct at its most powerful among those people and communities now choosing to live off-grid, in tents and tepees and log cabins in the woods across the world’s most remote areas and some that are not so remote. Coming on top of Greta Thunberg’s dire warning of climate catastrophe, we’ve had devastating forest fires in Australia, ice melt in the Arctic and now Covid-19.

So are the reports we are getting of the wild returning shyly to our cities a welcome sign that maybe we have not irredeemably poisoned the planet? That somehow, we can still make a deal with the near extinct species? That there is still time for us to find a balance, an accommodation with nature?

But not all of us are wide-eyed survivalists or green idealists. Many of our more cynical brethren have created spoof videos of wild animals returning to cities, so we must be careful of fake news; the ‘Second Coming of Nature’ is not here yet. The promised apocalypse still threatens. This pandemic has just been a holiday from ourselves, a species temporarily exiting its niche, until it is safe to return to business as usual.

I am all too aware, as I blunder into this subject of nature – botany, ornithology, climate – the normal purlieu of scientists and specialists, not romantics like me, that I need to be wary, to tread carefully; that I must not let the wish become father to the so-called fact.

As I consider the issue of nature rewilding the haunts of humans, I am surrounded by buttercups, daisies and green grass, the wallpaper of my world just now, and overlooked by more shades of green than any one palette has a right to. The trees are now fully clothed with leaf, burdened by a ton each of vegetable matter, capable of a science of its own, each fluttering leaf converting carbon dioxide into oxygen, these generous big-hearted wooden friends of man. It is a green and sunlit upland here, 900 foot above the Sussex coast, catching every breeze off the Atlantic, funnelled up the Channel.

From space, our world looks dramatically healthier than it did three months ago. There are empty cities, deserted roads and air pollution is dramatically lower all over the world. In London, air pollution was down by a staggering 50 per cent as people gave up driving and stayed home. Analysis of Covid-19 deaths show a very significant link between the most polluted areas of Italy, Spain, France and the UK, and deaths from the pandemic. I wonder if this lesson will deliver a cleaner world post-pandemic, our having learned the hard way that a polluted world makes man as vulnerable to illness as any other animal.

The Guardian reports that nature has reclaimed the ancient site of Stonehenge, the 5,000-year-old monument on Salisbury plain in southern England. A family of hares are nesting there now, and deer are nibbling the grass around the standing stones. There is silence among the stones for the first time in many years, and there is no sign of the 1.5 million visitors who tramp around it annually. If those stones have any sense of their own, any instinct for detecting energy, they must be wondering at the sudden quiet, and perhaps sighing with relief.

This World Heritage site was closed to the public in mid-March, along with other ticketed locations run by the charity English Heritage. Its new animal occupants moved in some weeks later. Whether or not the hares will stick around until Stonehenge reopens to the public – planned for early July – is anybody’s guess.

But before its official re-opening Stonehenge will, as it has for 5,000 years, be the focus of the Summer Solstice on 20 June. With the site deserted for the first time in years, English Heritage will be livestreaming the event.

Nature must be rejoicing at all this unexpected change, able to breathe easier as a result. There is a significant benefit to asthmatics and COPD sufferers in the improved air quality, and that must be true of every other creature on earth. Truly a case of every cloud having a silver lining.

I felt an urge to visit Callum in his stable this morning before everyone arrived to muck out and feed their horses, to have a private chat to let him know I would soon be returning, God willing. And then, a rare, sweetly hesitant, shy sound, stopped me stroking his neck and I simply stood and listened. Transfixed. It was the sound of a cuckoo close by in one of the trees surrounding the stable yard. My other African bird friend, long haul traveller, thief, shyster, murderer, nest emptier, but lovely, oh so lovely. It was not the first cuckoo I have heard this heartbreak spring of 2020 but it was the closest, loudest, clearest. I barely moved, just listened. We’ve lost over half the cuckoos visiting Britain this last 20 years. They are becoming rare, so this was an equally rare treat.

The Cuckoos come to us in early May out of the tropical rainforest of the Congo, the very heart of Africa, one of the last homes of the last of the great apes, the gorilla. Their route to Britain takes them round the bulge of West Africa over river estuaries and minarets, and out over the Straights of Gibraltar, looking down on coasters and yachts, fast drug launches, oil tankers and container ships. And then through Spain, climbing high to cross the Pyrenees into France past monasteries and lonely wolf-haunted sheep farms, through France, and once more across a salt strait, the Channel, and home, their second home, at last, for the summer.  Perhaps this bird had been watching me standing in Callum’s stable and compared me to another big ape back in our mutual second home, Africa. This was romance enough, even for me.

The song lasted for about two minutes and then the bird was gone, and as I strolled home for breakfast, I held this sound-diamond in my head, replaying it as I brushed aside the bracken and foxgloves.

In the evening, walking Gus, I spot a small herd of deer at the bottom of the sheep field. I think of deer and antelope as my spirit animal and am always pleased to see them.

Maybe this link with antelope and deer started with the rare sightings of Steenbok antelope on the Cape Flats outside Cape Town where I rode as a boy, still smarting from the hammering I took at school, where I was a very poor pupil. I’d see these animals always grazing singly amid the Port Jackson trees, and their presence was balm to my soul. I knew then that even as I sat trapped in a school desk, beset by a world of worry and failure, these animals were out there, miles from any human habitation, living their lives at peace, silently, quietly, with no need of a Matriculation certificate, or any need to understand the rules of rugby and cricket. I felt they were brothers and sisters, and so they have remained to this day.

At the age of 19, in the Army, doing my national service in the hot hell of Oudtshoorn’s veld in South Africa, there would be the occasional distant sighting of an antelope, and I’d know I was not alone; my spirit animal travelled with me, almost invisibly.

And when I reached Ashdown Forest in East Sussex, having fled Africa and made a new home, I found myself surrounded by herds of deer, hundreds of them, in this former royal hunting ground. Roe deer are the only native deer on the Forest. They are strongly territorial and so can regularly be seen in the same areas.

The Ashdown Forest deer population increased after the great storm of 1987 which restructured a great deal of the woodland, creating grassy glades and open rides. But the most common deer hereabouts are Fallow deer with the odd sighting of a rare Sika or Muntjac deer. Occasionally I spot a white Fallow deer, standing out clearly amid its brown brothers and sisters in the green fields.

These animals have no predators but man, and that largely by accident. Speeding cars take a terrible toll of them and there are signs on Ashdown Forest listing the number of animals killed each year. Now and then we will pass one, newly killed, by the wayside.

In autumn, the deep woods echo to the sound of stags belling. The roar is not that that very different from a lion’s roar and grunt. Once again, I find a sound bridge between my African boyhood and my adult life in Britain.

Stags and deer haunt my dreams. And I know I am not alone, even in lockdown isolation.