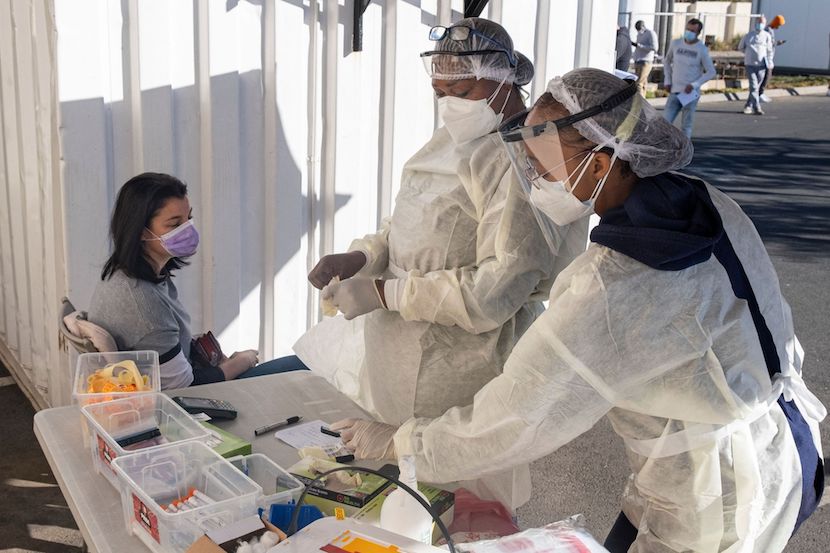 Just two weeks ago, Discovery Health’s CEO Dr Ryan Noach told BizNews founder Alec Hogg that “Gauteng is a hot bed at the moment. We are seeing a rapidly rising wave of Covid-19.” Below, Bloomberg reports that the economic hub of the country is seeing its highest level of excess deaths since the Covid-19 pandemic began. “In the week to June 20, a total of 2,242 more deaths than normal were recorded in the province.” On Sunday 27 June, President Cyril Ramaphosa implemented alert level 4, in an attempt to curb the high rate of transmission. While some say it’s too late, others are hoping that the vaccine rollout gains more momentum – just recently, teachers across the country have been receiving inoculation. People over 50 can receive vaccinations in SA, starting from July 15th. Listen to Dr. Noach’s interview below. – Jarryd Neves

(Bloomberg) – Excess deaths, seen as a more precise way of measuring total fatalities from the coronavirus, rose to their highest level in the South African commercial hub of Gauteng since the pandemic began.

In the week to June 20, a total of 2,242 more deaths than normal were recorded in the province that includes Johannesburg, the biggest city, and Pretoria, the capital, according to a report from the South African Medical Research Council. That compares with the 475 deaths officially attributed to Covid-19.

Excess deaths in the province, which are measured against a historical average, have risen for seven straight weeks from 229 in the week to May 2, highlighting the severity of a third wave of coronavirus infections. Gauteng, where one in four South Africans live, has in recent days accounted for between 57% to 69% of all daily national infections.

The National Institute of Communicable Diseases has attributed the rapid climb in cases and deaths to the emergence in the country of the delta variant, first identified in India. The South African National Blood Service said Monday that samples from blood donations showed Gauteng had the second-lowest incidence of Covid-19 antibodies of the country’s nine provinces, making it more susceptible to a new wave of infections.

The number of excess deaths in Gauteng compares with a peak of 2,114 in the week to Jan. 10 during the second wave of infections, and 2,172 in the week to July 12 last year, the crest of the first.

Overall 32,974 excess deaths have been recorded in Gauteng and 176,700 nationally over the course of the pandemic, according to the SAMRC. That compares with an official total of 60,647 attributed to Covid-19. While not all excess deaths may be due to Covid the SAMRC says most likely are. The cause of death may not be accurately recorded if people die at home or in remote areas far from medical facilities.

Nationally 3,907 excess deaths were recorded in the week to June 20, with 1,188 of those were officially attributed to Covid-19.

South Africa’s official death toll and almost 2 million infections make it the country hardest hit by the virus in Africa, although testing and accurate recording of the causes of death is weak across much of the continent.

While the third wave of infections in South Africa has so far largely been concentrated in Gauteng, which accounts for two fifths of the national economy, the proportion of new cases from the province fell to 57% of the 19,506 cases recorded Wednesday. That’s the first time it has been below 60% for a number of days, possibly indicating infections are accelerating in other provinces. Daily infections are at their highest since January.

South Africa only started the main part of its vaccine rollout in May with 3.03 million vaccinations administered of which just over 700,000 were in Gauteng. South Africa has a population of about 60 million, with 15 million of those in Gauteng.