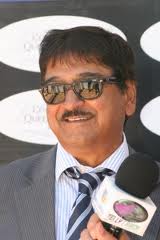 There’s been a lot of noise around talented jockey S’Manga Khumalo becoming the first black to pilot a winner of the Vodacom Durban July. Rightly so. But in the excitement, an even bigger breakthrough is forgotten – 2011’s J&B Met when the Hassen Adams-owned Past Master made him  the first black owner to win South Africa’s other big horse race. Adams, an old pal through our joint passion for thoroughbreds, is a hugely successful entrepreneur. The company he started, Grand Parade Investments, has used the leg-up provided through its stake in the GrandWest Casino to build an interesting portfolio of businesses. The market cap of the company’s JSE-listed shares is R1.7bn. Adams is focusing on gambling and fast food. In the former through dominance of the Limited Payout Machines; the latter through bringing the global Burger King franchise to South Africa. In this wide ranging interview conducted on the day that GPI consolidated its dominance in the LPM market through two significant acquisitions, Adams provides an update on the group’s progress in its key markets. A discussion that will surely whet the appetite of any long term investor.

ALEC HOGG: Grand Parade’s subsidiary GPI Slots has concluded an agreement to buy the shares and operations of the business that owns Hot Slots in Gauteng. At the same time the Mpumalanga Gambling Board has approved the transfer of a Limited Payment Machine Route Operator License that has been held by Zimele Slots to Grand Parade Gaming Mpumalanga.  The Chairman and Founder of Grand Parade Investments, Hassen Adams, is in our Cape Town Studio.  Good to have you on the program, Hassen.  Well, you’re a man who knows a thing or two about the gaming market as you guys like to call it.  The rest of us call it gambling.  But you need to give us some insight into what these Limited Payout Machines are or how they contrast with the one-armed bandits you find in your casinos.

ALEC HOGG: That’s interesting.  So you can have a R30 bet. Do you pull a handle in the same way as you would with a one-armed bandit?

HASSEN ADAMS: It’s exactly the same machine except that it’s a limited game that you play so that you can’t go and

throw your whole salary or life earnings into it.  The results are exactly the same and you can have a multiple bet where you can have multiples of R5. With the introduction of a maximum bet of R30 and a maximum pay-out of R3 000 it will change that market significantly.  At the moment we’ve seen that some of our machines, like for instance in the Western Cape, are giving us huge growth gaming revenues which are still below the casino levels, but getting closer.

ALEC HOGG: Hassen, this was supposed to be a very big market.  There’s something like 50 000 machines potentially or licenses that could have been issued and yet only around 7 500 have seen the light of day so far.  What’s holding it up?

HASSEN ADAMS: Look, I think that…you’ve got to understand that the process is quite onerous and happening in the right way because what’s happened is that it gives these small businesses better entrepreneurial opportunities.  The Gaming Board or the government insists that they have to comply with strict rules and regulations which means that they have to be tax compliant, business license compliant.  We, as the operators, are forced to make quite sure that that happens.  So we go through a process of taking people along that have never been in this sort of formal approach of business and once they get through the approval phase they’re ready to operate.  Now in our case we’ve done very well.  We’ve taken them along and in Cape Town we’ve nearly rolled out a 1 000 machine licenses and in Gauteng and KwaZulu Natal – especially in KZN – we’ve increased it substantially.  In Gauteng; there’ve been problems with the Gauteng Gambling Board and they’ve now been reconstituted so that rollout will happen very quickly too.  So from having an allocation of 50 000 machines for the industry…I think it’s going to take some time before we get there but it’s GPI’s intention to grab about 7 500 machines as part of the 50 000.  We are standing now with 6 000 machines which we are allowed to roll out.

ALEC HOGG: So you’re the dominant force here.  Just a small point; I went through Probity as you call it when I was elected to the Phumelela Board some years ago and it’s a heck of a process.  Do people have to do that as well when they have these LPM’s?

HASSEN ADAMS: Ja, it’s not as rigorous as when you’re a key employee.  I mean in my case I go through serious probity every year because I represent the company nationally.  There are softer versions of probity for these end-users.  You’ve got to understand that the guy who has the machines in his premises is the site operator and we, as the operator, have to go through strict probity because we deal with the actual gambling side of things. They house these machines in their facility and we have to give answers to the Gambling Board in terms of compliance and all sorts of protocols.  In actual fact; all of these machines are linked through a central monitoring system which is run by Zonke so that everything gets monitored in the right way.

ALEC HOGG: So you’ve got the lion’s share of what is out there at the moment. It was interesting as well, digging around in your accounts, to see that you want to be vertically integrated.  You actually want to make these machines in South Africa as well through your company called Grand Merkur.  Have you started manufacturing yet?

HASSEN ADAMS: Look, Alec.  I travelled the world because I couldn’t believe that a machine like a slot machine can cost as much as a motor vehicle and to my amazement I found that there’s not one company in this country that manufactures.  So we’ve gone out of our way to seek ways and means to manufacture.  We’ve signed an agreement with the biggest manufacturer in Europe called Merkur and also signed an association agreement with Tellumat which was the old Plessey factories in Cape Town and to our amazement they have all the competencies to roll out the circuitry and the switchboard and the switch gear in these machines and we will be manufacturing our own machines shortly.  We’ve bought the premises which now houses Tellumat in Atlantis and soon we’ll be creating a lot of work in Atlantis and be rolling out these machines.  We believe that the first machines will come out by the end of this year hopefully and we have already got the prototypes being tested on the floors at our slot venues at some of the casino venues and it has proven to be very successful.

ALEC HOGG: That’s a good news story – bringing manufacturing to South Africa.  Another good news story, one that you’ve been in the news on recently is Burger King.  I don’t know how ‘good news’ that is as it’s not going to help the waistlines, but it might help your bottom-line.

HASSEN ADAMS: I can tell you that Burger King is a responsible burger.  In America they call it a sandwich.  I just got back from all over the world.I’ve been in Germany to look at the factories and Alec, what is amazing is; we’re starting as of today to build a plant in Elsies River which is also an area that is depressed in terms of employment and we’re going to build a huge facility there to supply the whole of Africa with protein products which is the patties for the burgers. The patty is a pure beef burger.  There is nothing special about it.  It’s pure beef with no additives, no pepper and no salt and that’s why the Americans calls it a sandwich.  Burger King’s slogan is ‘have it your way’ so you can have it your way by having salads on it or mush or gunge – it’s your choice how you want the burger.  So you can cut down the fat around the waistline by making quite sure that you design it your way.  It’s been an amazing success.

ALEC HOGG: And of course ask for a diet Coke when you ask for your burger and chips.  But Hassen, where are you on the whole Burger King rollout?

HASSEN ADAMS: Burger King has rolled out its first store in Adderley Street in Cape Town which is now our Head Office.  We built our own 12-storey building in Cape Town and the bottom half houses Burger King. It’s an amazing success story.  The queues haven’t stopped and its three months later and our revenues have broken all records throughout the Burger King World.  I can tell you we’ve opened in Tygervalley and again, queues right around the mall. We’ve just opened last week in Cavendish and again a huge success story.  So the whole of South Africa and Africa is waiting for Burger King.  It’s actually gone beyond my expectation in terms of demand so it must be a great burger.  Apart from the fact that you’re worried about your waistline, the QSR market in the world is picking up because you know what: it’s an easy way to access food and whether you call it an extravagant way to eat, that’s what people want and that’s what we’re giving them.

HASSEN ADAMS: Sasol is an amazing deal.  We didn’t know that the Burger King brand is in such a demand and Sasol came to speak to us to ask for exclusivity.  We have exclusivity with Sasol although there are a few opportunities outside Sasol, but Sasol has basically signed an agreement for us to be their exclusive partner wherever you see Sasol outlets.  So we’ll be populating their forecourts with Burger Kings and also putting in all sorts of drive-throughs with Burger Kings wherever you see Sasol.  They are predominantly in the Gauteng or in the north so that’s where most of these shops are going to be located and it’s a great opportunity for us because it gives us a market immediately into those areas.