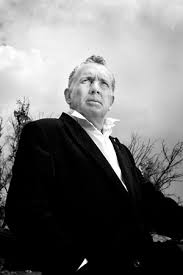 I met Barry Sergeant exactly three decades back. A young LLB graduate, he came for a job interview with my boss, the late David Carte, at the Sunday Times Business Times. Over the years I’ve sat in on hundreds of such interviews. That one I remember. Because when we asked Barry why journalism rather than law, he was unequivocal: “Journalism, done right, is the most

honourable profession on earth. That’s why I want to be one.” For half his career, it’s been my privilege to have worked on the same team. And despite hits that would send heavyweight boxers to the canvas, Sergeant, the self-named “Hyena” of SA investigative journalism, is still standing. Still fighting the good fight. Still wearing the white armour. Being sued by Brett Kebble was a challenge. Especially when his then employers abandoned him over a research report that proved amazingly prescient. More recently, it was no picnic being put through the chemotherapy grinder as he fought cancer. But Barry’s biggest legacy to his profession came in 2002 when he alone really listened to the man who blew the whistle on a greed-driven financial crisis that wiped out almost half the value of the Rand. Both he and the whistle-blower, Kevin Wakeford, suffered a great deal. They were both ostracised by their employers. With whispering tags that made them unemployable. Now, almost a dozen years later, they’ve collaborated to tell the full story about what went down. And, better still, are able to prove through subsequent events why they were always on the money. Even though, back then, nobody wanted to believe. Least of all those who should have. Sergeant’s book is called The Assault on the Rand. Here’s the video and transcript of today’s interview on CNBC’s Power Lunch. – AH

Click here to go to the video of my interview with Barry and Kevin on CNBC Africa.

ALEC HOGG: This week saw the Rand dropping to a fresh four year low against the US Dollar. The currency later advanced on news that America would be scaling back stimulus as soon as September. Well, that’s the Rand today, but the Rand in 2001 was a very different story and it’s the subject of a new book by a former colleague of mine – a good friend of mine – Barry Sergeant, author of The Assault on the Rand. Also with us in the studio is Kevin Wakeford, Chief Executive of Wakeford Investment Enterprises who plays a very key part in this whole story. Barry, I’m glad to see you here. You’ve had your own challenges writing this book.

BARRY SERGEANT: Ja, I was somewhat incapacitated. I had another attack of  skin cancer on my face. So I’ve had surgery and all the treatments but I’m alive and I’m feeling good.

ALEC HOGG: There are many of us who are delighted that you are. You are alive and feeling good and have managed to put yet

another book out. How many is this now?

BARRY SERGEANT: This is my third one.

ALEC HOGG: Of course the Kebble book was the one that got things going. Why now? Why 12 years later have you decided to grab this subject again?

BARRY SERGEANT: I think the main reason for that is that Kevin Wakeford, who played a crucial role during the collapse of the Rand in terms of blowing the whistle didn’t want to talk about it for a long time, just over ten years. I didn’t have enough information to write a book that I felt would be complete without input from Kevin. So I waited and last year he said he’s prepared to talk about it. That was the main reason for why the book has taken so long.

ALEC HOGG: You took a lot of punishment at the time of the Rand Commission and clearly we’ll talk to Kevin in just a moment. Do you have any resentments about what happened back then to you?

BARRY SERGEANT: No. Not at all. The various people who turned out to be involved, confirmed that they were part of the Rand’s collapse in 2001. At the time, the early part of 2002, they went on the attack and I was one of the casualties. That’s just part of the landscape. Apart from anything else, it’s been so long that I certainly don’t regret, nor want any kind of vengeance.

BARRY SERGEANT: Resentment? No, certainly not.

ALEC HOGG: Well, you’re used to it though, aren’t you? Brett Kebble certainly didn’t hold back.

BARRY SERGEANT: No, Exactly. He even went so far as to sue me.

ALEC HOGG: I was glad to see you weren’t on his hit list, though. There were five names there. Yours wasn’t on it.

BARRY SERGEANT: He probably thought by that stage he’s done enough to me so he’d leave me alone.

ALEC HOGG: In 2001 you were a whistle-blower. Just briefly tell us the story.

KEVIN WAKEFORD: Alec, as you know the Rand went from around R8.00 to R13.84 to the Dollar. That was a 45% devaluation. If one inverses that it’s 45% off the disposable income of ordinary people, but more so, SACOB’s members. The South African Chamber of Business (of which Wakeford was CEO at the time) had 40,000 members. Most of them were small family businesses and businesses like that usually operate on credit. There’s quite a bit of loan capital sitting in the companies and they have to service that debt. Whenever you have a collapse in the currency, you have inflation spiking and you have interest rates going mad. So people were insecure. They wanted answers and I didn’t have any at the time. It was my job to find out, so I called for a Commission of Inquiry. I met with a number of people from the presidency, including the Economic Advisor to the President, Prof Wiseman Nkuhlu. I gave him whatever detail I had from my source. I don’t know why my source was the subject of news at the time. If you look at the transcripts of the Commission of Inquiry, James Cross was the former Deputy Reserve Bank Governor – and the whole transcript is in the book – he said they knew everything already (that my source provided).

ALEC HOGG: Any regrets that you did what you did?

KEVIN WAKEFORD: No, I have no regrets.

ALEC HOGG: You took a caning.

ALEC HOGG: You had this great career, young Chief Executive of SACOB. And all of a sudden – ostracised.

KEVIN WAKEFORD: Yes. And after a year or two I started clawing my way back into the mainstream again. I had a lot of good friends who came to the party who opened up opportunities for me. The first business venture we had kind of collapsed. It was called Growth Africa. It was an investment facilitation company.

ALEC HOGG: But Kevin; why now? Why have you only now said to Barry ‘great, I’ll give you the story of what happened’?

KEVIN WAKEFORD: You know, after that process (in 2002) I’d lost my stamina to fight. I just needed to regroup, to find myself again, to gain perspective. And if you read the book, a lot has been revealed subsequent to the Commission. So, different players who closed down the Commission, who were part of the Commission, and who were part of the attack on me, have been revealed as beneficiaries of the process itself. So I think it’s going to be very interesting for the readers to see who in fact gained and who lost. I gained in the sense that I found myself. I’m far more deliberate about where I want to be in life and where I’m going. I was young. I was hungry at the time and I was certainly full of fight and I enjoyed the fight. But I really had to settle down and that’s why I didn’t go straight into a book.

ALEC HOGG: We could carry on here for hours and unfortunately time has caught us up. But Barry, what’s your next trick?

ALEC HOGG: In terms of this. Kevin was saying we’ve had the Rand Commission. There was perhaps a lot of propaganda and miscommunication at the time. Certainly the bits of the book that I’ve read point that out. Is there any retribution? Is there anything that’s going to happen as a consequence of what’s been revealed here?

BARRY SERGEANT: Alec, I think there are two points. The collapse of the Rand in 2001 was the biggest financial crisis in South African history. For a lot of people, it just passed them by. It was reversed when Kevin Wakefield blew the whistle. That’s point number one.

Point number two: it was a huge cover-up – huge.

There were a lot of people involved and I’ve gone through the whole list in the book. I think it’s time, given especially what’s happened globally after 2008 in the global financial banking crisis, for the local banks to be taken to task – and I would include the Reserve Bank in that – so that we can actually look at that experience many years later and say simply; What can we learn from it Isn’t that fair enough?

ALEC HOGG: Barry Sergeant; lovely to see you. And Kevin, also nice to see you back in the business mainstream. We look forward to a lot more from the two of you in the years ahead. That was Barry Sergeant, the author of The Assault on the Rand and Kevin Wakeford, Chief Executive of Wakeford Investment Enterprises.