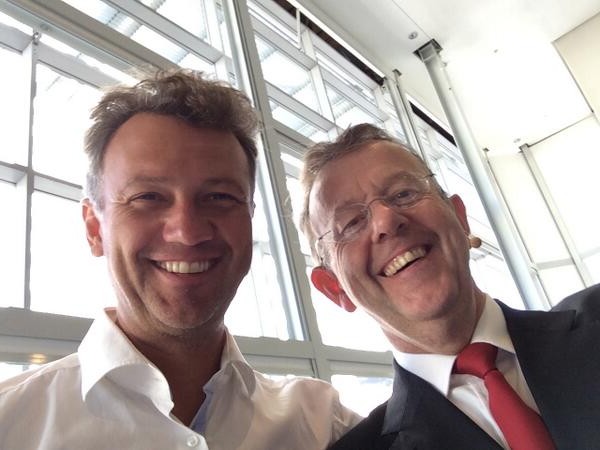 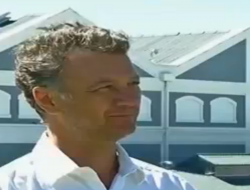 Michael Jordaan is among my favourite human beings. Not just mine. With over 42 000 followers @michaeljordaan is easily SA’s most popular businessman on Twitter. His thousands of fans will be delighted to hear the former banker who tossed in the corner office last year to join his wife Rose and their daughters on their wine farm, is a lot more relaxed of late. As you’ll see from this interview at the Cape Town Waterfront, his hair is a little longer and more curly; and as he tells Bruce Whitfield, he only wore trousers (rather than shorts) in case the cameras stayed from his face. We carried this interview on CNBC Power Lunch today. Biznews doesn’t usually transcribe interviews that I’m not directly involved with, but this one was irresistible. Besides, I did do the lunchtime introduction of the clip so guess it qualifies. Great to see these two wonderful characters in such fine form. – AH

MICHAEL JORDAAN:  The ecosystem they have there is an incredibly powerful ecosystem.  It has the supply of venture capital, it has the university (like Stanford), and it has all the smart people coming together.  I was really impressed with it.  It was a lifestyle destination, exactly as Cape Town is, with all the smart people in the capital.  However, the world is becoming flatter and its information technology that’s driving it.  It’s one flight away if you need to go there, but there’s no reason that an upcoming South African will have to leave the country if they can live here and implement their ideas here.  I firmly believe that the world’s becoming flatter and flatter, more and more globalised by courtesy of information technology, and I’ve seen some great entrepreneurs that I think will still make their mark on the world’s stage.

BRUCE WHITFIELD:  There are many levels of technology of course, and one of the great South African developments has been Mxit.  You’re on the board of Mxit and you Chair Mxit as well.  Is Mxit bigger than Africa or is it ‘condemned’ to being an African technology for African people?

MICHAEL JORDAAN:  The WhatsApp purchase – 19 billion Dollars – has actually put Mxit in the spotlight again.  Clearly, WhatsApp is the Goliath.  I do believe that there will be room for Davids in this game, as well.  The particular niche Mxit has found for itself is feature phones, so it operates on over 8000 models of phones, and they will still be around in Africa in a couple of years’ time.  Obviously, one day everyone’s going to have a Smart phone, but for the next couple of years it’s a reality in not only Africa, but also in India where we recently launched and ultimately, in other emerging markets.  It’s therefore a ‘David versus Goliath’ play, but one with potentially huge option value, I believe.

MICHAEL JORDAAN:  The JSE is a venerable institution in South Africa.  It’s the best-regulated exchange in the world and for me that was a way of keeping one foothold in the formal financial services area, and to Johannesburg.  Generally, I’ve had to say no to quite a few of those.  I don’t want to dress up for work anymore.  I put on long pants just for you today, but generally, you’ll find me in shorts.  It’s more about substance than it is about the form when you’re in venture capital, and I love that.

BRUCE WHITFIELD: How much trouble is Nicky Newton-King at the JSE, considering of course, that you do have a reputation of being a disrupter?  I’ve chatted to her recently and said ‘you’re not making the JSE accessible enough to ordinary investors.  You really need to…’ and she agrees.  She wants to broaden that.  Do you see that as part of your job?

MICHAEL JORDAAN:  I think Nicky’s doing an amazing job.  I have to tell you I think she’s taken that business by the scruff of its neck.  There’s an incredible amount of projects being implemented right now, which I think you need to do because it’s essentially a technology business. I do see my role on the board to be maybe less about all the very important governance issues, but to question them on business strategy and on innovation and again, this is a business, which can be disrupted by small competitors that are not formal exchanges.  You have to be on the lookout for those dark pools, which trade off the formal exchange.

BRUCE WHITFIELD: There’s always been a threat, for a long time that somebody’s going to come in and open up a competitor exchange.  The JSE has it all nailed down in terms of the equity and bond exchanges and the futures exchange, but why can an American not be doing it?  One of the biggest threats, you said, to banking when you were running FNB was ‘Google is probably the biggest threat to banking in the world’.  Google could be a threat to exchanges.

MICHAEL JORDAAN:  Google can be a threat and the though you really need to have is this: a competitor doesn’t have to come from South Africa.  It can come from anywhere in the world.  These can now change in offshore locations and it can be the very same shares, but just on a different platform.  You go from what one could describe as a quasi-monopoly – the JSE really is, by far, the largest exchange in South Africa – to one that suddenly has to compete against every single exchange in the world.  That is quite terrifying, but it’s also exciting.

BRUCE WHITFIELD: Do you get bored yet?  It has been 16 months effectively, out of a job, if you add your leave into it.  Have you been bored for a day yet?

MICHAEL JORDAAN:  I was privileged at FNB.  I had a great team of people.  I was intellectually stimulated.  I suppose I could open doors.  However, there’s a lot happening once you close that one door and you go into a new world.  I’m meeting interesting people, I’m meeting entrepreneurs, and I’m learning how difficult it is to interact with big corporates, by the way.  There’s definitely a gatekeeper mentality in big corporates.  However, I’m stimulated, and I really think the entrepreneurial world is exciting.  Entrepreneurs are inherently positive, they give energy, and in that way, I also derive my own energy.

BRUCE WHITFIELD: It’s an interesting point, because big companies are a pain in the neck.  When it comes to trying to deal with them, they have their systems, they have their processes, they have their suppliers, they know what they’re doing, and they do it very well.  To open up – you used the term earlier – their ecosystems to more, creates work for them and they’re not really in that zone, I don’t think.

MICHAEL JORDAAN:  Look, I suppose I shouldn’t be the one to criticise big corporates.  I worked for one myself, but it’s very different when you’re inside the corporate.  When you’re an entrepreneur with a great idea and you approach one of these big corporates, it’s as if there are people who feel they don’t necessarily have the responsibility to say ‘yes’, but they do have an accountability to say ‘no’.  There are a number of projects, which I think would make a lot of sense for many big corporates in South Africa.  We just have to keep knocking on doors.