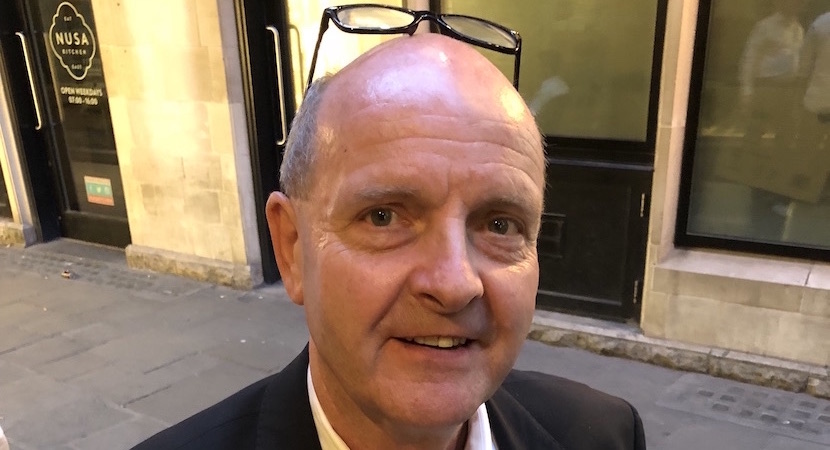 It’s impossible to over-emphasise the value Paul O’Sullivan has brought to his adopted country. The Irish-born founder of Forensics for Justice strides boldly into areas where most fear to tread, his notches ranging from murderers, gangsters and fraudsters through to a couple of former chiefs of SA Police Services. While the rest of us listen to the fruits of his efforts with admiration, what we don’t see is the grind of research and fact checking that precedes the arrests. Like this morning where O’Sullivan was forced to attend a court in Germiston to respond to a crooked businessman trying to get a gagging order. After an hour of waiting, the lawyers of one Jose Trindade who had brought request in the first instance then requested a postponement – probably because their client had no stomach to face O’Sullivan’s questioning. On Rational Radio this week, the forensic investigator gave us the back story – and more. – Alec Hogg

Paul, lovely talking with you. We’ve been following this story that should have gone to court this morning. Did you actually go along to Germiston?

Yes I went to court. Mr. Trindade was there with a legal team including the well-known criminal lawyer Lawrence Otis. We went into court and they asked for a postponement until 22nd of November. So the matter is being delayed until then.

To go back, what exactly were you doing in court today, because you were the guy being accused of being in the wrong?

On the 4th of March this year I approached Trindade and told him that although our investigations were not completed I was satisfied that a vast amount of money had been stolen from a company called Tubular Construction Project which was a special purpose company set up for tendering at Eskom. I didn’t say as much in my email but we found that there were massive payments being made to Eskom employees as well.

What is Trindade’s relationship with this company Tubular?

He owns 65% of the company. He’s got a group holding company and he owns the shares through that and he owns the group holding company. So every time he does a project he sets up a new company. He solicits the involvement of black economic empowerment shareholders. Our client is one of those black economic empowerment shareholders who has effectively been swindled out of his slice of the action because they’ve stolen all the money from the company and the company is for all intents and purposes insolvent. Having completed a R4bn project.

How did they get the project in the first place?

It’s now apparent that they got the project by paying bribes to senior Eskom employees.

Okay. So how can you land up being accused in court.

I wrote to Trindade and I told him if he didn’t repay the money he’d stolen I’d open a criminal case against him, he ignored the e-mail. So a couple of weeks later I found out who his attorney was and I sent him an email. I reiterated that he needs to repay the money stolen and it needs to be done promptly or else we’re going to open a criminal docket. I went and opened the criminal docket on the 26 of June. That criminal docket is published on our website. So we open the docket on the 26th of June and on the 2nd of July Biznews did an interview with me, three days later he goes to the Germiston Court and attempts to bring an ex-parte application to have me gagged on what’s known as an anti-harassment order. Meanwhile, I’ve only sent him two e-mails. So he’s just playing tricks. I said let’s fight it out in court and bring your lawyers along and asked him if told his lawyers that he is paying them with the proceeds of crime.

So that was the court hearing today which has been postponed. Sounds rather strange?

Yes, it’s been postponed as they say they need more time and want to see all my evidence. We’re taking legal advice as to whether or not we give them the evidence. We’ve opened a criminal docket. The evidence we have runs into thousands of pages. We’ve handed all of that to the SIU and to the DPCI and we are going to consult with them to see whether or not they’re comfortable with us handing them all the evidence before the criminal investigation is being completed. We are satisfied. For example, one of the payments to an Eskom employee is showing amounts of R500,000 for roofing sheets, at R8,500 each. This same sheet costs R485 from Build-It. So the whole thing is completely fraudulent, notwithstanding why employee would be selling roofing sheets to a contractor.

So what did Eskom do about this?

What Eskom have done is appropriate. They’ve referred the matter to the SIU. We’ve been communicating with the SIU and they are at the point of asking the National Prosecuting Authority to prosecute them. But as you know the NPA is still captured. It might have a new leader but certain elements of the NPA are completely captured. The organisation itself has been disemboweled of good prosecutors and the remainder that are left are just overworked and underpaid.

Paul why did you do this kind of thing? I was having a look at some of the stories that we ran in the past couple of years and you’ve taken on the NPA as you’ve now explained. Certainly when they were captured you were even more aggressive. Well at least they’ve got a new head now. But you took on Shaun Abrahams, McKinsey – which has probably got some of the most ammunition of any organisation in the world to hit back with, Hogan Lovells, The Sunday Times – which buys its ink by the barrel and Selebi, who you put into jail. What is it that that makes you do these things?

Forensics for Justice is a charity. We’ve recognised that the criminal justice system in South Africa was captured a good few years ago and we’ve decided to expose these cases and publish it all on our website. Some of the cases we have been able to get successful arrests or prosecutions. For example, I gave The Sunday Times seven days notice to retract all three stories and seven days later they retracted all three stories. So I think our aim is to keep exposing the rot and keep holding people accountable.

Yeah well that’s that’s a good result in that case but in this Trindade case it looks like you’re going to be going to court a lot, that’s expensive in terms of time let alone legal fees.

Yes well up till now I’ve been defending myself. The accuser is looking very worried because he knows that I want to get him into court. I can then put questions to him while he’s under oath and he either will incriminate himself or exercise his constitutional right to remain silent. The court can then draw their own conclusions from that.

If you had the opportunity to cross question this Trindade who you have documented evidence on, is corrupt, and has been corrupting people at Eskom. If that were to happen would that be enough for the police to arrest him on the spot. Or how does the criminal justice system work.

Well as I’ve said to you, in a normal world he should have been arrested already. The evidence is overwhelmingly against him. But as you know the criminal justice system in South Africa is captured and you’ve got more chance of seeing instant justice if you steal a loaf of bread from a supermarket. But if you steal billions of rand from Eskom for some reason the paralysis in the criminal justice system sells out and these people are getting away with it.

So we know the the President has made the fight against corruption his top priority.

We’ve been in constant communication with the president’s office and with the new head of the NPA. I’ve communicated with Shamila and said to her “You’re in charge of the NPA but you’re not in control of the NPA and you won’t be until you get rid of these people”. I gave her a list of names of people that need to be shipped out.

What did she do?

It’s work in progress. We have the Labour Relations Act and the criminal justice system that says you’re innocent until found guilty – unless you’re Paul O’Sullivan getting on a plane and having used your Irish passport, in which case you get swift justice and you get dragged off the plane and detained and tortured.

Where are we from your assessment of the changes. When Cyril Ramaphosa was in Davos 2018 he said that these were the things that were going to change? Corruption was the number one priority. How much progress has he made?

Well I think we’re getting there slowly but surely. One can liken our criminal justice system to a battleship. We were heading off full steam ahead in the wrong direction, we have changed direction, but it takes 16 kilometres for a battleship to do a 180 degree turn. Now we’re in the process of the 180 degree turn and probably by either late this year or the middle of next year, the system will be working more efficiently and we’re going to be seeing people dragged before the courts with a bit of justice being meted out.

I get this question often so I’m sure you get it three times more. Why is it taking so long to put people behind bars?

It’s a mixture of paralysis, hidden agenda and good people having to take a back seat because they’ve either been fired or put out. People like Shadrick Shabir, Unmore Amut, Shaun Abrahams, Deba and Mrwebi. While they were running the NPA they managed to persuade a lot of good prosecutors to leave. Look at Gerrie Nel. He’s ended up going to work in private practice for AfriForum. If he was still running at the NPA he’d be a perfect person to take on some of these cases.

So why aren’t they re-employed?

Sometimes people don’t want to go back. For example, look how they chased Glynnis Breytenbach out of the NPA. She’s gone into a political party now. I say sometimes it’s hard to go back over these bridges especially if the bridges have been burnt.