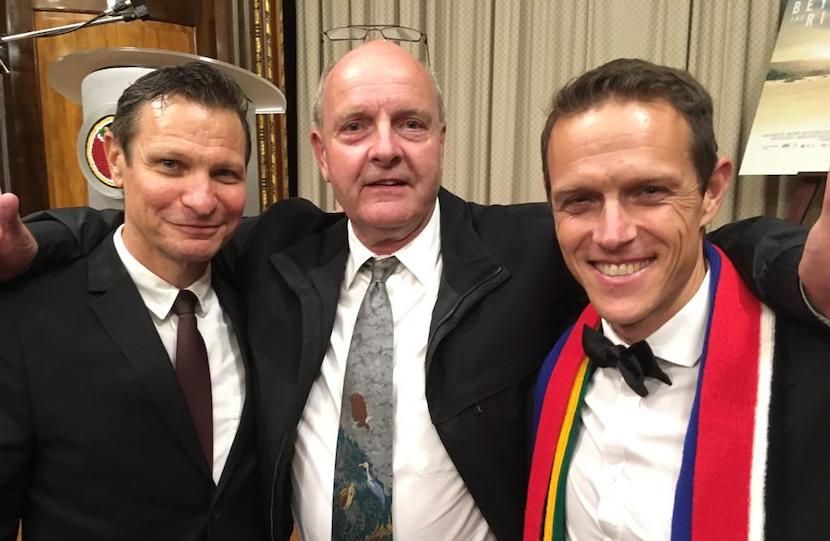 LONDON — Iron man Paul O’Sullivan has a soft spot after all. Then again there’s a reason why the Irish, a nation of poets, writers and musicians, say they are all born with bladders a little too close to the eyes. Given what he writes below, I’ll wager there were a few droplets shed during the emotive movie that O’Sullivan urges every South African to watch. Because its message is the only one that makes sense – by pulling together in a Mandela-style nation building programme, a prosperous and peaceful future awaits. Nice one Paul. And a great reminder, too, that South Africans need each other to succeed. Truly. – Alec Hogg

Last night, I was incredibly privileged to be a guest of South African High Commissioner to London, Ms Thembi Tambo at the UK premier of the movie ‘Beyond the River’ at Leicester Square and afterwards at the High Commission on Trafalgar Square. What made the evening even more poignant, was the fact that 2019-04-24 was the 26th anniversary of the passing of the late, but great, Oliver Tambo. I was privileged to have met ‘OR’ in the year or two after he returned to South Africa, when the country was filled with hope and trepidation. The hope and trepidation gave birth to the Rainbow Nation and for a heady decade or more, things just went from good to great.

That was before the Zuma years. The pot of gold at the end of the rainbow vanished, then the rainbow itself was switched off and replaced by dark clouds, whilst Zuma and his Gupta friends, polarised the nation under the guise of uplifting the poor, which provided a smoke-screen for the Zupta’s to literally rob the country blind. It may takes years, or even decades to recover from the blight of fraud and corruption that the Zuptas and their Zuptoids delivered to us.

Throughout the dark decade of state capture and Zuptarisation of all organs of State, there were a few glimmers of hope, which gave birth to the belief that South Africa cannot be taken down the tubes by one corrupt man or one corrupt party. Forensics for Justice was born during the dark Zupta years, along with other organisations, aimed at exposing and fighting corruption. We were joined at the coal face by power-house NGO’s such as Helen Suzman Foundation, Corruption Watch and Freedom Under Law. Together we succeeded in turning back the cloak of evil, even if we were to be heavily punished for the stance we took.

During these dark years, more sinister forces arose out of the graveyard of darkness, such as BLF, sponsored with the proceeds of Zupta crime and led by EFF expelled Andile Mngxitama, who spends most of his time creating disharmony and further racist polarisation.

Whilst we were fighting in the trenches, exposing land restitution fraud and sinister forces were being created, under the guise of land for blacks, South Africans were emigrating and externalising assets like never before. For those of us that stuck around, we hope soon to be able to see the rebirth of our rainbow nation.

One story that gives us hope that this is possible, is the movie BEYOND the RIVER. The movie was inspired by the true story of Siseko Ntondini and Piers Cruickshanks, who together won gold in the 2014 Dusi Canoe marathon, becoming the first mixed-race team to do so.

The movie is a home-grown movie made with stunning scenic back-drops and occasional (sadly) inner-city depravation and slums. However, the movie is a true inspiration for all South Africans, and gives us a feeling that despite the darkness, there is light and despite the despair, there is hope, hope for a better future.

The movie was launched in South Africa two years ago. However, yesterday, it was premiered in the UK ahead of being released on the UK circuit on 27 April 2019, which is the 25th anniversary of the first democratic elections. That last quarter of a century has been a roller coaster ride, which we all hope will now become a steady track back to normality.

Whilst there is still much work to be done, I commend all South Africans, in South Africa or the UK to watch the movie, if you have not already done so. We had the pleasure of the attendance at the UK Premier, of Thembi Tambo, and a few snacks at the High Commissioner thereafter. We were also blessed with the presence of the real Siseko Ntondini and Piers Cruickshanks, as well as their screen acting counterparts Lemogang Tsipa and Grant Swanby.

Before the start of the premier, which was therefore before I had any idea who the real persons and actors were, I was surprised that they each greeted me, separately, to tell me they admire the work I am doing. I was embarrassed to have to ask for their names, whilst they knew exactly who I was. I have not so many heroes and found out last night, that pretty much everyone has a hero, even the heroes themselves.

In their own way and in my own way, and in the way of many of us, we all have a story to tell. A story of not surrendering to evil, but beating it, a story of overcoming racial barriers to win gold at the Dusi. It is these stories, that give us all hope of a better life. What’s your story?