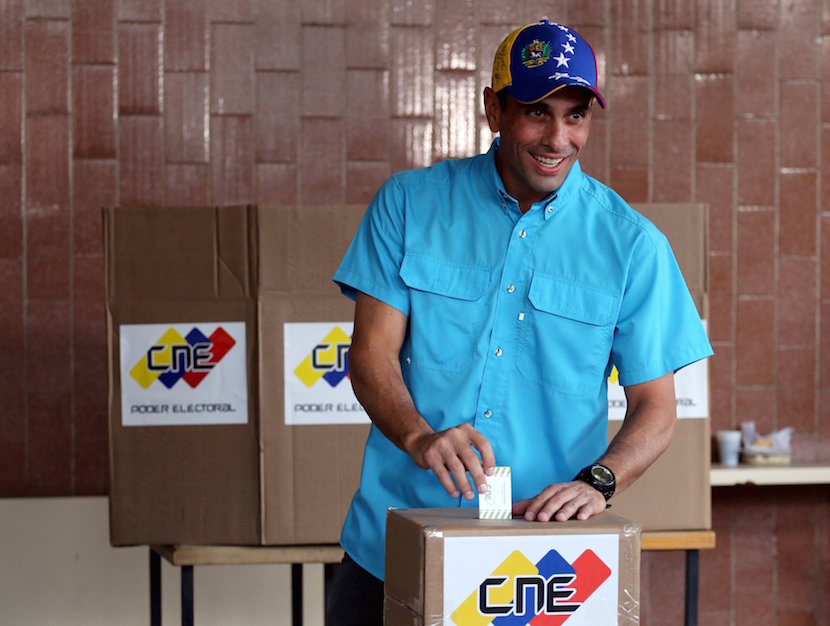 After 16 years, the poster country for “21st Century Socialism” has overwhelmingly rejected the experiment. Venezuelans yesterday voted to eject their socialist leaders, handing a 59% mandate to the Opposition. The vote mirrors Argentina’s earlier swing away from a party that enforced idealistic but ruinous economic policies. Venezuela’s GDP has contracted by 10% this year. Many political opponents of the socialist government, including Opposition Leader Leopoldo Lopez, have been jailed. Analysts feared that with so much at stake, the Government led by former bus driver Nicolas Maduro, would rig the election. – Alec Hogg

Venezuela’s opposition won a majority of 99 out of 167 seats in the state legislature, electoral authorities said Monday, the first such shift in power in congress in 16 years.

The head of the National Electoral Council, Tibisay Lucena, announced the result in a public appearance shortly after midnight, five hours after polls closed.

Venezuela’s opposition anticipated victory Sunday after polls closed in a legislative election that leaders have warned risks sparking violence in the oil-rich but impoverished nation.

Electoral authorities had yet to publish any results, but senior figures in the broad opposition coalition MUD started effectively claiming victory.

Read also: This is the future: “21st Century Socialism” in tatters – Left out of money

“The results are what we hoped for! Venezuela has won!” Capriles, leader of the Justice First party, wrote on Twitter.

Tintori, whose husband leads the Popular Will party, said in a video message published online: “We have won by a lot, we have won well!”

They did not state where they got their information about the results.

The state National Electoral Council (CNE) had yet to release results and there was no official comment from President Nicolas Maduro’s government, though his supporters also celebrated in the street in eastern Caracas.

Squabbling broke out in the evening, with the opposition accusing the government of foul play by keeping polling stations open longer than scheduled.

First Argentina, today Venezuela and perhaps Brazil next. Perhaps it is time to talk about a Latin American Spring.

The opposition is vying to win control of the legislature from the socialist government for the first time in 16 years.

Long lines stretched outside polling stations as voters fed up with soaring prices and food shortages cast their ballots to back the opposition, while others vowed to push on with the “revolution” of the left, in control since 1999.

Opponents have accused Maduro of rigging voting districts and intimidating them. Numerous opposition figures are in jail.

Surveys by Venezuelan pollsters such as Datanalisis have shown the opposition is likely to win a majority in the legislative National Assembly for the first time since late socialist leader Hugo Chavez was first elected in 1999.

But analysts say they may struggle to counter Maduro’s presidential powers.

The country of 30 million is in an economic crisis due to plunging oil revenues, with families suffering shortages of basic foods and supplies.

Queuing to cast his ballot at a school in central Caracas, 24-year-old fast-food worker Filros Guzman said he used to vote for the government, but was now fed up with being unable to find toilet paper and enough food in the shops.

“I liked the socialist ideology of an equal society. But now I have changed my mind because of everyday problems,” he told AFP.

“You can’t vote for the government when you’re having difficulty surviving.”

Others want the ruling PSUV party to keep control of congress so it will continue approving the social spending programs of Maduro and his late predecessor, “Comandante” Chavez, father of the “Bolivarian revolution.”

“There is no turning back. Revolution and nothing else,” said mechanic Gilberto Marcano, 73, as he stood in line to vote in northern Caracas. “I will never do wrong to my comandante.”

Since the mustachioed former bus driver Maduro was elected after Chavez’s death in 2013, soaring inflation has slashed families’ spending power.

Maduro promised to respect the results as he voted in western Caracas, dressed in his party’s red jacket.

“A key task for the new National Assembly will be to bring about economic recovery, to attack hoarders, speculators, and those who are hiding products,” he said.

Some analysts say Venezuela risks political deadlock and leaders including Capriles have warned of a repeat of anti-government riots that left 43 people dead last year.

“The big problems are the lack of security and the high cost of living,” said William Carrasco, 55. “Things could get violent.”