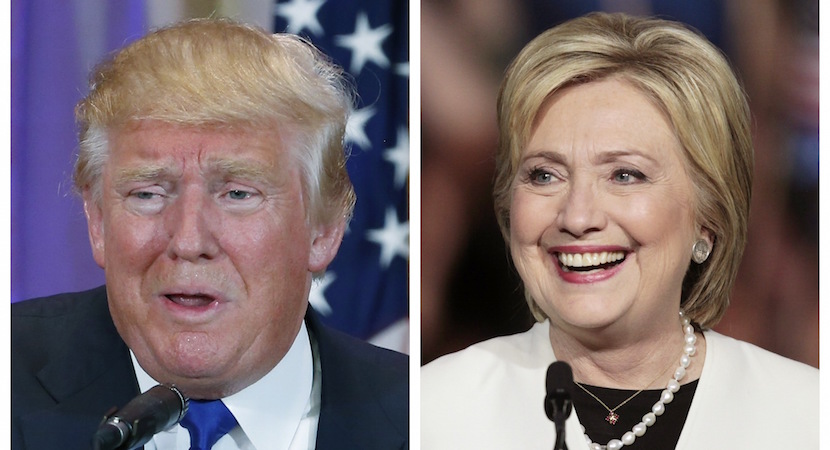 It’s not hard to work out where South African sentiment lies in the looming battle for the US Presidency. Nor, for that matter, whom the the rest of the world would like to win. But neither decide who will be the next leader of the Free World. That privilege requires US citizenship. After yesterday’s “Super Tuesday” contests in 11 US states the Presidency has turned into a match race between Democrat Hillary Clinton and Republican Donald Trump, both of whom have established dominance against their party rivals. The prospect remains that former New York Mayor Michael Bloomberg could enter as a third candidate. But it remains uncertain whether Bloomberg would really be willing to enter a race he is not certain to win, or as a reaction to stop Trump, who might actually benefit from a Bloomberg candidacy. So it is rapidly becoming a question of whether the political establishment will hold sway, or a brash, rich outsider will be given the power to smash the old order. – Alec Hogg

(Bloomberg) — Donald Trump exploited a divided Republican Party to take at least seven states as part of a commanding Super Tuesday showing, even as Senator Ted Cruz of Texas managed to win his home state and neighbouring Oklahoma to keep his campaign alive.

The real estate mogul and former reality television star grabbed a firmer grip on his party’s presidential nomination, potentially so strong that his rivals may no longer be able to knock it away from him.

Cruz’s victories, including one that kept him from an embarrassing and potentially campaign-ending loss in Texas, are likely to keep his bid viable at least through the next big slate of contests on March 15.

“I feel awfully good,” Trump said, when asked if he views himself as the presumptive nominee at a late-night news conference in Palm Beach, Florida.

His wins included Virginia, a state where Florida Senator Marco Rubio aggressively campaigned and was thought to have a shot at winning. Rubio did pull out a win, his first, in Minnesota’s caucuses.

“This was definitely a good night for Trump,” said Doug Heye, a Republican strategist and former spokesman for the Republican National Committee. “The decision to have a press conference, in that fashion, to appear presidential, was smart, despite saying some crazy things.”

In his speech from Texas, Cruz made a point of highlighting that he’s won multiple states and Rubio hasn’t. “Our campaign is the only campaign that has beaten, that can beat, and that will beat Donald Trump,” he said.

“If you’re angry with Washington, I understand,” Cruz said. “But Donald Trump has been part of the Washington corruption for 40 years.”

Trump, who has ridden a wave of anger at the Washington establishment among voters who’ve felt left out of the political process, told reporters that Rubio “hurt” himself by going so negative against him, starting with Thursday’s debate.

“He decided to become Don Rickles,” Trump said, invoking the name of the 89-year-old comedian known for his insult humor. “But Don Rickles has a lot more talent.”

Rubio vowed to fight on, as he spoke to supporters at the Ronald Reagan Equestrian Center in Miami, saying he’d begun to turn the tide on Trump by taking a more aggressive stance against him.

The Super Tuesday outcome across 11 states represented the closest thing yet to a national referendum on Trump, the brash New York billionaire who has thrown out the traditional rules of campaigning.

In all of the states, the raw vote totals are telling, but more important will be the delegates awarded under varying rules in the states. Republicans were also competing in Alaska’s caucuses.

State officials reported strong turnout as the biggest day yet in the 2016 campaign drew to a close and a divisive Republican Party battle continued to simmer over the front- runner and the future of the party.

Trump entered the day with all the momentum and a string of three dominant victories behind him, in New Hampshire, South Carolina and Nevada. He continues to benefit from a splintering of support for his rivals among leaders of the party establishment.

In the days before the voting, Cruz and Rubio ratcheted up their personal and political attacks on the front-runner as their party struggled to agree on whether and how to stop him. Rubio even questioned the size of Trump’s hands and, indirectly, his manliness.

The situation has left some establishment Republicans openly questioning whether their fractured party is headed for disaster in November, should Trump win the nomination. A poll released Tuesday by CNN showed Democratic front-runner Hillary Clinton beating Trump 52 percent to 44 percent among registered voters in a hypothetical general-election contest. Against Rubio and Cruz, she narrowly trailed.

The Republican dismay is fueled, in part, by Trump’s initial failure to repudiate the support of former Ku Klux Klan leader David Duke in a weekend TV interview.

Just as Trump tried to portray himself as someone who could bring Republicans together, there were growing rumblings from within his own party about the unrest created by his candidacy. A little more than an hour before he gave his victory speech, a super PAC “Our Principles PAC” released a web video attacking him as a racist.

The Super Tuesday contests — like those held in the first four states — awarded delegates on a proportional basis, so winning some of the vote translated to netting some of the 595 delegates at stake. The rules change starting with the March 15 contests, when states start awarding delegates on a winner-take- all basis. A total of 1,237 are needed to win the Republican nomination.

(Bloomberg) — Hillary Clinton drew on strong support from black voters and women to deliver a decisive performance against Bernie Sanders in the Super Tuesday round of primaries and caucuses, giving her the overwhelming lead for the party’s presidential nomination.

As she gets closer to locking up the Democratic race, Clinton has begun to turn attention to Republican front-runner Donald Trump in anticipation of a possible general election campaign. Trump on Tuesday won seven of the 12 states in play in the Republican race, based on early returns.

Speaking on Tuesday night at a rally in Florida, which holds its primary on March 15, Clinton congratulated Sanders for his “strong showing and campaigning’’ but aimed most of her comments at Trump and the rest of the Republican field.

“It’s clear tonight that the stakes in this election have never been higher, and the rhetoric we’re hearing on the other side has never been lower,” Clinton said. “Trying to divide America between ‘us and them’ is wrong, and we’re not going to let it work.”

The former secretary of state’s margin of victory in most of the seven states she won puts her in a position to claim a major portion of the 884 pledged delegates at stake in Tuesday’s contests — about a third of the 2,383 necessary for the nomination — to expand her advantage over Sanders.

Clinton won Texas, Virginia, Massachusetts, Georgia, Tennessee, Alabama and Arkansas, according to the Associated Press. Sanders won primaries in his home state of Vermont and Oklahoma and the Colorado and Minnesota caucuses.

Sanders vowed to continue his campaign until the party’s nominating convention in July. Speaking in Vermont after his victory there, Sanders said there still were 35 states remaining to vote.

“Let me assure you that we are going to take our fight for economic justice, for social justice, for environmental sanity, for a world of peace, to every one of those states,’’ Sanders said as the crowd chanted, “Bernie, Bernie, Bernie.’’

The Vermont senator had also hoped to carry Massachusetts in his home New England, with an electorate closer in composition to New Hampshire, which he won handily, than South Carolina, where he was routed by Clinton. Although the margin there was closer than in the southern states, Clinton ultimately prevailed with a slim majority.

Former President Bill Clinton made a series of unexpected stump appearances in Massachusetts on Tuesday for his wife. He appeared with Boston Mayor Marty Walsh at Holy Name Parish School in West Roxbury, where about 400 children had assembled on a hill outside to greet the former president.

Clinton has dominated the race since Sanders essentially tied her in the Iowa caucuses Feb. 1 and defeated her by more than 22 percentage points a week later in New Hampshire. She won the Nevada caucuses Feb. 20 in the first test in a state with a large minority population, and won the South Carolina primary Feb. 27 by almost 48 percentage points.

Clinton is building a lead in delegates that is difficult to overcome, as she knows from the experience of her 2008 loss to Barack Obama. Because delegates are awarded in Super Tuesday states on a proportional basis based on vote percentages, even Sanders’s victory in some states won’t narrow the delegate gap enough, said Joe Trippi, a Democratic strategist who isn’t aligned with either candidate.

“After tonight, it should be clear that his candidacy is about the party platform and not winning the nomination,” Trippi said.

Clinton can effectively secure the nomination as soon as all the results from Super Tuesday are in, and certainly no later than mid-March, said Jeff Berman, the campaign’s consultant for delegate strategy.

Berman helped Obama beat Clinton with delegate math in the 2008 race. After serving as first lady to a popular Democratic president and as a senator from New York, Clinton was the favorite, only to be overtaken by Obama’s insurgent campaign. Clinton entered this year’s race having learned the lesson of not taking her opponent — or any individual contest — for granted.

Sanders’ campaign scheduled a press breakfast on Wednesday to analyze the Super Tuesday results and “discuss the campaign’s path forward.”

In Texas, Virginia and Georgia, the three biggest prizes of the night, exit polls show Clinton won 70 percent or more support among women in each state and more than 80 percent of black voters. She won 71 percent of the Latino vote in Texas. Even in Massachusetts, where she won a bare majority of the total vote, Clinton captured 57 percent of the female vote and 61 percent of non-white voters, according to the exit polls published by CNN.

“I do not see any evidence that Sanders has figured out how to break her lock on African-American voters,’’ said Steve Elmendorf, a Democratic strategist in Washington who was deputy campaign manager for presidential candidate John Kerry and is backing Clinton.

The states where Clinton won on Tuesday are worth 662 delegates combined. By comparison, Colorado and Minnesota have only 143 together. Oklahoma has 38 and Sanders’ home state of Vermont has only 16.

Clinton also has an advantage among the party’s 712 superdelegates, a mix of elected officials and party leaders who are free to back whom they like and change their loyalties.

The former secretary of state had 984 delegates, including pledged and superdelegates, compared with 347 for Sanders, according to an Associated Press tally as of midnight.

“A realist could well feel after Super Tuesday that Sanders won’t be able to catch up,” Berman said.