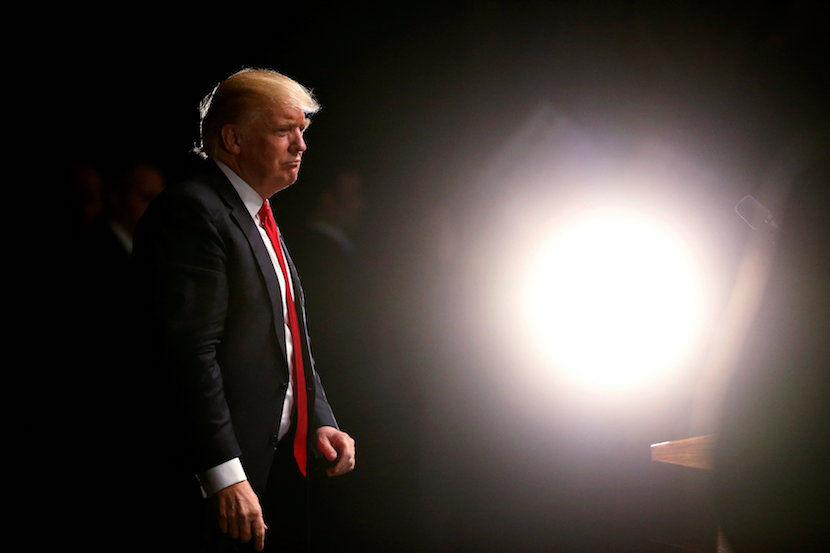 As it does so often, the US is once again leading the way in changed thought processes. But this time you’ve got to wonder what the world stands to inherit. Donald Trump’s US Presidential ambitions should have been dead and buried long ago. He opens his mouth to change feet, alienating vast blocs of important voters, and has the kind of comical appearance that makes him a natural lampoon. Yet he has brushed aside Republican rivals – and now faces a Democrat with more than her share of skeletons. Much as the political establishment is kicking against it, the world has changed. After Trump, there’s no going back. – Alec Hogg

(Bloomberg) — On a day when Republicans in Congress would normally be rallying around their new presumptive presidential nominee, there was instead mostly silence or awkward tap-dancing around Donald Trump’s triumph.

Senator Susan Collins of Maine told a home-state radio station on Wednesday that she’s holding out her endorsement until she sees whether the bombastic real estate tycoon can behave like a president. An aide to one of the year’s most vulnerable Republicans, Senator Kelly Ayotte of New Hampshire, told a local news outlet the senator plans to support the nominee, only to later send a media statement insisting that doesn’t mean that she’s endorsing him.

“I vehemently oppose our nominee and some of the comments and issues he brought up during the campaign,” Heller said during an interview with Nevada reporters one day after Ted Cruz suspended his campaign and hours before John Kasich did the same. “Things that he’s said about women and the Hispanic community across the West.”

Asked whether he would commit to voting for Trump, Heller responded, “No, but what I’m committing to is voting against Hillary Clinton.” He pointed out that voters in Nevada have the option of voting for “none of the above.”

The unwillingness to immediately embrace the party’s clear nominee for president is extremely unusual and reflects the torment of many lawmakers, who fear that Trump will drag down other Republicans with him. Many worry that Trump’s deep unpopularity, particularly with minorities and women, could help hand Democrats control of the Senate and create Republican losses in the House.

“Many are being very careful with their language, not throwing in their wholehearted support, which would normally be standard operating procedure,” said Ron Bonjean, who served as a top aide to former Senate Majority Leader Trent Lott of Mississippi. “They’re trying to distance themselves from Trump until he makes it a safer political climate for them.”

“I have committed to supporting the nominee chosen by Republican voters, and Donald Trump, the presumptive nominee, is now on the verge of clinching that nomination,” McConnell said in a statement. “Republicans are committed to preventing what would be a third term of Barack Obama and restoring economic and national security after eight years of a Democrat in the White House. As the presumptive nominee, he now has the opportunity and the obligation to unite our party around our goals.”

Trump has received some stronger support. Soon after Kasich canceled a planned news conference in Virginia and word leaked that he would be dropping out, Senator  Richard Burr of North Carolina — facing a tough re-election fight that might get more difficult with Trump at the top of the ticket — posted a message on Twitter that he’s for Trump and for keeping Clinton out of the White House.

“I look forward to working with Mr. Trump at the top of the ticket and to maintaining a GOP Senate,” Burr wrote.

Trump made a number of gestures Tuesday night and Wednesday aimed at reaching out to the Republican establishment.

“I am confident that I can unite much of” the party, Trump said Wednesday on NBC. “Some of it I don’t want.”

Yet even as Republican National Committee Chairman Reince Priebus was quick to anoint Trump as the presumptive nominee Tuesday night, much of the establishment remained much more wary.

Republican Governor Charlie Baker of Massachusetts told reporters he questioned whether Trump has the temperament to serve as president. “I’m not going to vote for Mr. Trump and I sincerely doubt I’ll be voting for Hillary Clinton either,” he said.

Martinez “will not vote for Hillary Clinton. Period,” spokesman Mike Lonergan said in an e-mailed statement. “That said, she wants to hear how Mr. Trump plans to address issues that directly affect New Mexicans — like how he plans to protect our labs and military bases.”

Governors Brian Sandoval of Nevada and Greg Abbott of Texas said in Facebook posts they support the presumptive nominee, without mentioning Trump by name and underscored their opposition to Clinton’s candidacy.

In the coming weeks, more Republican lawmakers may well come to embrace Trump openly. But in the immediate hours after Trump’s victory, the response was notably tentative.

Representative Michael Burgess of Texas issued a statement Wednesday that mentioned his earlier choice — Cruz — three times, but referred only to an unnamed “Republican nominee” who he will support to ensure the party wins the presidency.

Trump spent most of his campaign so far harnessing Republican discontent with the establishment, something that clearly is a factor in the reluctance of many lawmakers to endorse him.

That anti-establishment energy could translate into votes for Republicans in House and Senate races this fall in certain regions, including parts of the South and in the Appalachian region, said Jack Pitney, a professor of political science at Claremont McKenna College in Claremont, California.

“But suburban Republicans and people representing more diverse constituencies are going to be a lot more wary,” he said, adding that Republicans are now worse off in Senate races in Wisconsin, Illinois, Florida and Nevada in particular.

Senators including Collins are calling on Trump to seek a tone with broader appeal.

“Donald Trump has the opportunity to unite the party, but if he’s going to build that wall that he keeps talking about, he’s going to have to mend a lot of fences,” Collins said in an interview with WGAN radio in Portland, Maine. “He’s going to have stop with gratuitous personal insults.”

She added that she will wait until the Republican convention in Cleveland to decide whether to throw her support to Trump.

On the Democratic side, Trump’s status as the presumptive nominee will trigger a new set of efforts to tie vulnerable Republican incumbents to Trump’s controversial remarks.

“We aren’t going to have to do a heavy lift here,” said Lauren Passalacqua, a spokeswoman for the Democratic Senatorial Campaign Committee. “For us, the work is really just making sure that people recognize it’s not just an intention to fall in line with the party, but there are real agreements on policy that can be spotlighted.”

At least one Democratic challenger is already grabbing onto the strategy. Conner Eldridge, the Democrat taking on Republican Senator John Boozman in Arkansas, released a two-minute web ad this week that called the senator a Trump “enabler” and sought to tie the incumbent to some of Trump’s more incendiary remarks about women.