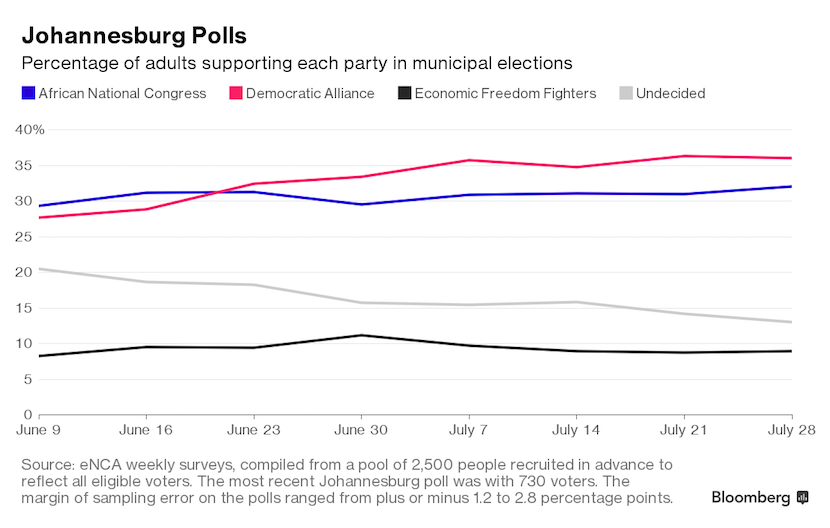 Surveys gauging the national mood as South Africa prepares for local elections suggest declining support for the ruling ANC. The change is unlikely to be as extreme as you might expect for a political party that has been rocked by one corruption scandal after the next, including over the credibility of this week’s elections. Polls suggest no clear majority is expected in cities like Johannesburg, Pretoria and Port Elizabeth. Leaving nothing to chance, ANC leaders have been working hard at drumming up support. This weekend, for example, President Jacob Zuma invited Winnie Mandela, the hugely popular if controversial former wife of Nelson Mandela, to join him at a rally at Johannesburg’s Emirates Park Stadium. While South Africans aren’t casting their votes for a President or Parliamentary representatives, these elections are still important – particularly as a litmus test for political sentiment ahead of the 2019 national elections. With parties like the DA, which has its first black leader, and the EFF working hard at gaining votes, these local elections are seen as a referendum on the ability of the ANC to govern South Africa and the indication of the country’s prospects. On a practical level, voters will decide who gets to control municipal budgets. That in turn means they get a say on how their cities and towns are managed. Here’s a quick guide on how the voting works and what’s at stake on Wednesday. – Jackie Cameron

(Bloomberg) —South Africa’s local-government elections on Aug. 3 will be the most closely contested since white minority rule ended in 1994. The outcome will be a barometer of change in political sentiment in the lead-up to 2019 national elections and indicate just how badly support for the ruling African National Congress has been dented by a series of scandals embroiling President Jacob Zuma.

1. What offices are up for grabs?

The election will decide who controls South Africa’s 278 municipalities, which oversee parks, libraries, sanitation, some roads and electricity and water distribution. The councilor and mayoral jobs are highly prized in a country with a 27 percent unemployment rate. The municipalities had joint revenue amounting to 309 billion rand ($22.3 billion) in the year ending June 2015, with the bulk of the money coming from central-government grants, electricity sales and property taxes. Several municipalities will be combined over coming months, reducing the total number to 257, according to the local government ministry.

South Africa’s national elections use a proportional representation system that allocates parliamentary seats to parties based on their share of the vote. By contrast, local elections use a mixed system. Some local councilors are elected directly by winning their wards, while others are appointed by the parties.

The 61,014 candidates represent 200 political parties and include more than 800 running as independents. The ANC remains the party to beat, having won more than 60 percent of the vote in every election since the end of apartheid. It secured outright control of 198 councils in the last municipal vote five years ago and controls seven of the country’s eight biggest metropolitan areas. Its main rival is the Democratic Alliance, which has governed Cape Town since 2006, won 18 councils in 2011 and took 22 percent of the national vote in 2014. The new kid on the block is the Economic Freedom Fighters, which was formed in 2013 and won 6 percent of the national vote the following year after calling for the nationalization of mines, banks and land.

4. What are the polls saying?

Support for the ANC will probably slip to 54 percent from 62 percent in national elections two years ago, according to a South African Citizens Survey poll of 1,300 adults who were interviewed on June 16. Polls commissioned by broadcaster eNCA  show the DA now has the biggest backing in Johannesburg, the commercial hub; the Tshwane municipality, which includes the capital, Pretoria; and the southern Nelson Mandela Bay municipality, which incorporates the city of Port Elizabeth. But no party had a clear majority in any of the three centers, indicating that they will be run by coalitions after the election. The DA has never been part of a governing coalition in those major cities.

5. How credible will the election be?

South Africa has a solid record in running elections, with almost all parties accepting the results of post-1994 votes. The DA has questioned the impartiality of the Independent Electoral Commission’s chairman, Glen Mashinini, because he previously served as an adviser to Zuma. Also, the IEC is laboring to verify the details of millions of people whose addresses were missing from the voting roll. On June 3, the Constitutional Court ruled the election could go ahead while giving the IEC 18 months to update the roll. The commission says it has adequate safeguards in place to prevent rigging.