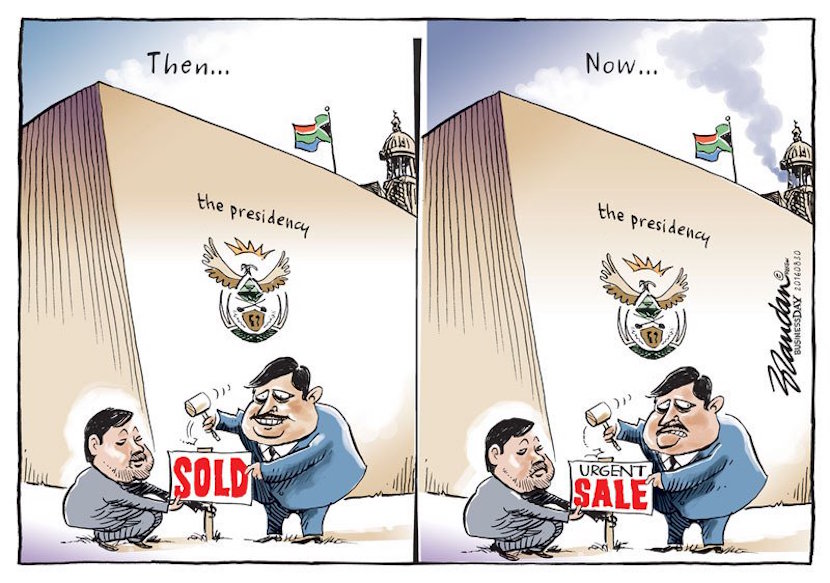 South Africa is on the brink of an economic crisis as a plan by President Jacob Zuma and associates to gain greater control of state entities takes shape. It puzzles many that Zuma, who rose to power on the strength of his popularity among the masses, appears to be authorising moves that are destablising his political party, the ANC, and his country. There are a couple of factors feeding into the vicious battle that has erupted between Zuma and his associates, on the one hand, and finance minister Pravin Gordhan and his supporters, on the other. Co-Pierre Georg, a University of Cape Town expert on financial markets and risk, sets out the themes in order to explain why Zuma will do whatever he can to oust Gordhan – including run his own country into the ground and therefore cause irrevocable harm to the many people who have supported him over the years. The influence of the rich Gupta family runs so deep it appears like brothers Ajay, Atul and Rajesh, originally from Uttar Pradesh in India, are pulling Zuma’s strings, though the family has denied any involvement in state capture or any irregular dealings. – Jackie Cameron

South Africa has caught the world’s attention with an epic battle between two powerful factions within the governing African National Congress (ANC) which has spilt into government. Deputy President Cyril Ramaphosa has aptly described this as a government that wages “war with itself”.

On the one side there is the largely rural based faction of patronage politicians around President Jacob Zuma. The other side is less well defined, but it can be safely assumed that the beleaguered finance minister Pravin Gordhan is among them. What makes this battle different from the usual political quarrels is the viciousness with which the patronage politicians are fighting to get the upper hand.

The World Bank’s Joel Hellman has defined state capture as

the efforts of firms to shape the laws, policies, and regulations of the state to their own advantage by providing illicit private gains to public officials.

In South Africa, obtaining government tenders should be added to the channels through which unscrupulous firms and individuals can benefit from state capture.

It is necessary to understand the system of patronage politics and the state capture that fuels it to understand why replacing Gordhan is so important to Zuma. So important, that Zuma is willing to risk the unity of his party and losing South Africa’s investment grade sovereign debt rating, which would have devastating effects on the economy and the budget.

The South African captors are reported to be the wealthy Gupta family. Their capture of the government is so deep that they even dared to offer finance minister Nhlanhla Nene’s job to his deputy, Mcebisi Jonas.

The money provided by the Guptas fuels the patronage machinery that Zuma and his cronies use to fight for dominance in the ANC. The family has denied the allegations against it.

South Africa has reached a critical point. If the patronage politicians win the battle within the ANC and complete the capture of the state the country will slip from stagnation into the abyss.

Institutions that have been compromised

As part of their fight for dominance, patronage politicians have attacked the freedom of press as well as the rule of law.

Hlaudi Motsoeneng, chief operating officer of the SABC, turned the public broadcaster into a propaganda machine by telling its journalists “do not focus on negative stories”. The resulting mess at the SABC even triggered scathing criticism from some within the ANC’s top leadership.

Institutions that guarantee the rule of law have suffered severely. The reputation of the National Prosecuting Authority, for example, has been shredded by its decision to appeal a high court ruling to reinstate the 783 corruption charges against President Zuma.

The charges were dropped in suspicious circumstances in 2009. This paved the way for Zuma to become president.

Similarly, the Directorate for Priority Crime, (known as the Hawks), has been used to create a narrative that would allow Zuma to replace Gordhan with someone from the patronage camp. University of Cape Town legal expert Cathleen Powell argues that the Hawks’ continuing attacks on Gordhan are “not only nonsensical, but are obviously nonsensical.” The Hawks, she says, are behaving in a way that “is blatantly outside their powers under law.”

This week, a new front has been opened against an institution most would have believed was beyond the reach of the patronage politicians. First, ANC Deputy Secretary-General Jessie Duarte questioned the independence of the Reserve Bank saying that its private ownership posed a “difficulty”. Then, Mineral Resources Minister Mosebenzi Zwane suggested to cabinet that the right to grant banking licenses be moved from the Reserve Bank to the National Treasury. The National Treasury has been a key target for capture because it controls the government purse.

From an economic perspective, the comments by Duarte and Zwane are obvious nonsense. The Reserve Bank’s independence is enshrined in the constitution. And the bank has been lauded for its independence, for maintaining price stability and for ensuring the health of the banking sector.

To suggest, as Zwane has, that National Treasury should conduct banking supervision is contrary to international best practices and would only weaken banking supervision in the country. Through the foolishness of their suggestions Duarte and Zwane reveal their true colours. Zwane has been linked to the Guptas since his appointment as minerals and energy minister while Duarte’s son-in-law has been linked to the family.

The economic consequences of state capture are devastating for the economy. South Africa’s dysfunctional state owned enterprises, from South African Airways to the national power utility Eskom, are weighing heavily on the economy. In a recent evaluation the IMF emphasised the need for South Africa “to improve SOE performance and strengthen their governance.”

The parlous state of the state owned enterprises was amplified this week when Futuregrowth, Africa’s biggest private fixed-income manager, announced that it would no longer be lending money to any of them, including Eskom.

Losing the confidence of Futuregrowth and other institutional investors will significantly exacerbate the country’s economic woes. South Africa will not only lose access to much needed funding for infrastructure projects. It will also increase its chances of being alienating international investors as well as rating agencies.

This is something it can ill afford given its large and persistent current account deficit. Without investment, and without its current sovereign rating, the country’s currency will plummet even further, exacerbating inflationary pressures.

There is, unfortunately, no quick fix to the current crisis. The only way of getting rid of patronage politicians is through a political process. A government needs checks and balances from a strong civil society. The ANC, it seems, has not understood the warning voters sent during the last municipal election. Let’s hope it will understand the warning international investors are sending before the damage to the economy becomes irreversible.