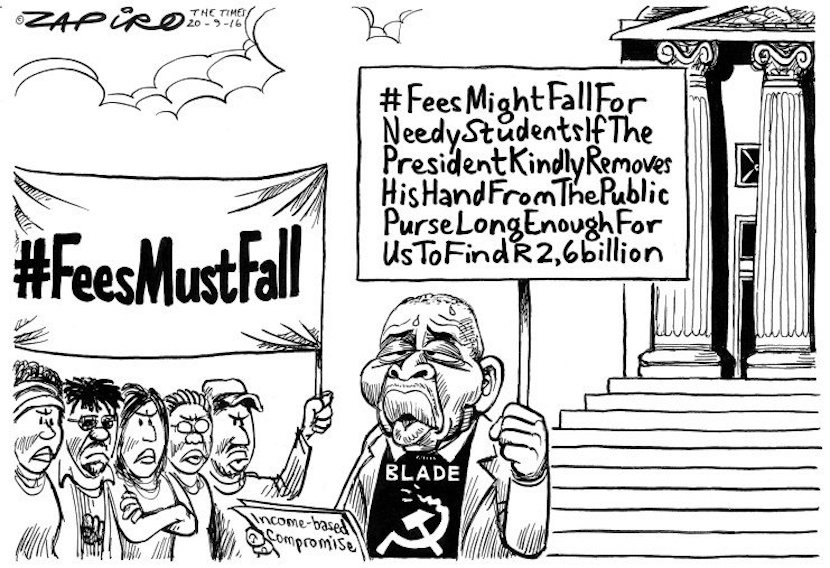 South African universities are in deep crisis. A government announcement that university fee increases should be capped at 8% has not gone down well among student activists. Ultimately the demand is for free higher education. If the government can’t provide this, the next step is to demand that the public sector covers the costs of providing university tuition for all students. Violent protests have escalated to the extent that university authorities fear for the safety of their staff and students and are prioritising protecting property – including libraries. Normal learning and teaching activities can no longer continue. These protests are not only against tuition fees; added to the mix are demands to change the colour of institutions. Students would like a significant overhaul, from the removal of plaques allegedly celebrating “white supremacists” to a shift in entrance policies so that they blatantly favour applicants on skin colour – and specifically black students – rather than academic performance and aptitude. It’s not just students who are stirring up discontent. Some lecturers have joined the battle to “decolonise” university education, no doubt seeing opportunities to further their careers at the expense of paler-skinned colleagues. Meanwhile, the most talented academics – those with stellar research records and international standing – must be sorely tempted to look elsewhere for roles where they will be better appreciated. An academic exodus will further erode the quality of South African higher education provision. The message from Professor Suellen Shay of the University of Cape Town is that leaders – political and at university level – put their heads in the sand at a time they should have been working out solutions. With anger at unprecedented levels, it will be difficult at this stage to get students and the authorities to meet at a mutually acceptable mid-way point. – Jackie Cameron

South Africa’s Minister of Higher Education and Training Dr Blade Nzimande has announced it is up to the country’s universities to “individually…determine the level of (fee) increase that their institutions require…”. But he cautioned that no university’s fees should be raised by more than 8% for 2017. This follows a blanket freeze on fees in 2016 that left a number of universities on the verge of financial collapse. Professor Suellen Shay unpacks Nzimande’s announcement.

Is the minister’s decision good news or bad for South Africa’s universities?

Overall it’s good news – or it should be. It’s good news from universities’ point of view. The 8% figure comes from a recommendation by the Council on Higher Education. Now universities will have to make the final choice about their increases.

Communist Blade Nzimande thinks that universities should decide on their own fee increases. How positively and oddly free market of him.

I think it was a measured statement. The minister could have made a purely political announcement – one that would have been closer to the governing African National Congress’s recent support for 0% increase for the second consecutive year.

All of that said, the announcement hasn’t been good news to a very significant proportion of the student population. Mass meetings were being held at various campuses after the minister’s press conference so students could discuss their responses and plan their next moves. The University of Cape Town (UCT) suspended all academic activities in anticipation of the announcement.

What do you think students would have liked to hear from the minister?

I don’t actually think it would have mattered what the minister said. There is such a groundswell of unhappiness among students. It started long before last year’s #feesmustfall movement and goes back to the #Rhodesmustfall protests that saw a statue of Cecil John Rhodes removed from UCT’s campus. There are all these issues, of inequality, of decolonisation.

A significant proportion of the “born free” generation – those who were born in or after 1994 – has had it. They’re fed up on all fronts. The state, university management. We’ve left too many things for too long. It’s viewed as us doing too little, too late. Now we have a crisis.

ANC takes higher education so seriously that their minister Blade Nzimande was missing in parliament when fees debate was happening. Wow

The focus in the next few days will be less on making fee-related decisions or discussing the minister’s announcement. Universities will be focusing on security, on keeping campuses open or shutting them down amid safety concerns. There’s no head space to tackle students’ underlying deep seated anger and frustration. We’ll be trying to figure out the cost of security per day instead of having bigger discussions.

What will it take to create the space for those discussions and for taking decisions?

We’re in a very tough space to be finding an action plan.

If you go back to the beginning of 2015 when students first started protesting, there was an opportunity to stand back and ask big questions; to set up ideological discussions. Now we’re fighting fires around a group of students who are saying

You wouldn’t talk or listen to us a year ago, so now we’re not interested.

We need a wider conversation so that we can find each other. At UCT, for instance, there’s been a call for a Truth and Reconciliation Commission mediated by people from outside the institution, giving students a chance to air their grievances and share their experiences.

University councils will now have to figure out how high or low they set their fee increases. When do you think that will start happening?

Never mind deciding what we do with the money: the questions right now are, ‘Are we open or closed tomorrow? How do we ensure everyone’s safety if we reopen or remain open? Should we be closing with exams coming up?’

I think what we’ll see is local issues – those unique to individual universities – connecting with the national issue of funding. Those will all feed into a bigger channel. What that looks like, we don’t know.

Johannesburg – Although students are divided along political lines, they are united in their call for free education, a Wits University SRC official said on Monday.

“No matter the political background and opinions, the one thing that we all agree on is free education, and that is the unifying banner,” Student Representative Council secretary general Fasiha Hassan said.

She was addressing journalists who had been kicked out of meeting students held at Senate House, which they had renamed Solomon Mahlangu House during protests against fee increases last year.

She said they tried to emphasise unity in the student movement, and the need to make efforts to bridge the gap between historically black and historically white institutions.

Higher Education Minister Blade Nzimande announced earlier on Monday that universities could increase fees by no more than 8% for the next academic year. Government would help households with an annual income of up to R600 000 with subsidies.

Hassan said they agreed it was time to focus attention on the private sector and its role in paying for university education. Some students had suggested marching to the Johannesburg Stock Exchange and Chamber of Mines.

“Now we need to target the private sector. It has not played a big enough role, nor contributed to or developed higher education enough,” Hassan said.

‘This is traumatic for all of us’ – Wits SRC official

Johannesburg – Students feel they are worse off following the announcement that university fee increases will be capped at 8%, a Wits University’s SRC secretary general said on Monday.

“In many ways we are back to where we were last year, before fees must fall, and that is where the big source of anger comes from,” Student Representative Council secretary general Fasiha Hassan told journalists outside Senate House.

“This is not fun. It’s not fun to interrupt the academic project. It’s very abusive and traumatic for all of us.”

She said that as far as students were concerned, government only managed to freeze fee increases, not reduce them. Those who could not afford to pay tuition in 2015 faced a similar problem in the current academic year and would do so again in 2017. She said students were frustrated with government for failing to decisively deal with fees.

“There has been an attempt to focus on the increment, but the issue here is actually free education.”

She was reacting to Higher Education Minister Blade Nzimande’s announcement earlier on Monday that university councils had to decide their own fee increases for next year, but that these could not exceed 8%.

Although universities had yet to discuss their options, students had rejected Nzimande’s proposal.

“We are disappointed he put the prerogative back with councils. They’ve raised fees over the years as they pleased without any intervention. We hoped that intervention would come now, but all he is saying is go back,” Hassan said.

They spent Monday afternoon closing off the institution’s entrances and exits and trying to force students out of lecture halls and classes.

Tertiary education, like healthcare, should be free – UCT student

Cape Town – Tertiary education, like healthcare, is a basic service which should be free and not commodified, a UCT student activist said on Monday.

“We will not accept anything else,” Masixole Mlandu said shortly after Higher Education and Training Minister Blade Nzimande’s announcement that universities could increase fees for 2017, but not by more than 8%.

“By the end of the year, we want the call for free education to be realised. Education is part of basic services, like land and water, which today our people have to buy.

“That idea of commodifying necessities comes from the capitalist white supremacist society, which says only a certain few should have the right to access such spaces.”

Following Nzimande’s announcement, UCT vice chancellor Max Price said the institution would hold talks with those affected, including the SRC, to prepare recommendations for council regarding fees and financial aid for 2017.

Mlandu warned that UCT would remain shut until students’ demands were met.

On Monday, student leaders reiterated their call for the university to reinstate students who had been suspended, interdicted, or expelled following protests against fee increases.

They repeated a previous demand for a “Shackville” Truth and Reconciliation Commission to be held within the year.

In February, students erected a shack on UCT’s upper campus, as a symbol of the struggle for student housing and against financial exclusion. The university’s security guards demolished the shack.

On Monday, a group of students made their way to UCT residences to mobilise others to attend a meeting at the Jameson Hall. Protesters referred to it as the Marikana Memorial Hall.

There they discussed their demands. For workers, these included a minimum wage of R12 500 per month, whether they were insourced or not, and protection against victimisation for participating in protests.

Students called for an admissions policy that prioritised black applicants and for statues and plaques “celebrating white supremacists” to be removed.

Lecturer Lwazi Lushaba called for tertiary education that did not alienate black students from their people, culture, and language.

“We can’t depend on white academics to give us decolonised education,” he said to thunderous applause.

Another student meeting was expected to take place on campus on Monday night.