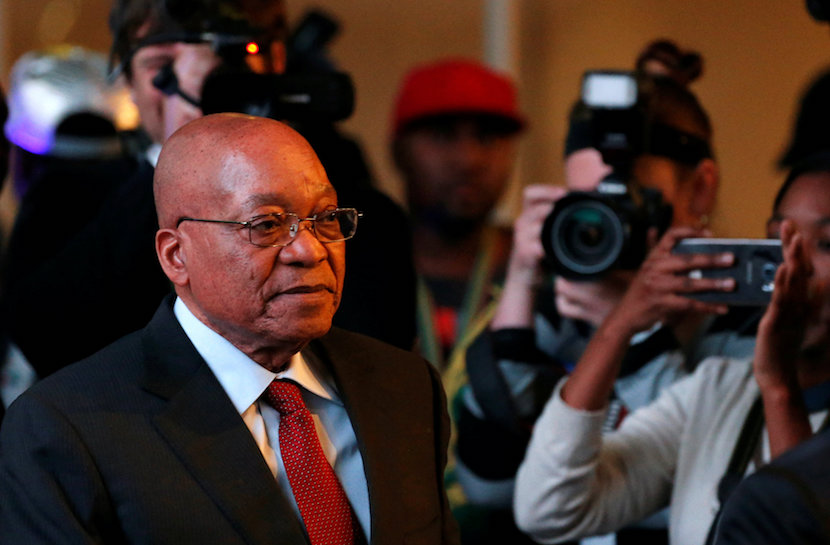 President Jacob Zuma dangled the carrot of free university education for students in a brief appearance aimed at quelling unrest that has swept the country. We’ve heard you “loudly and clearly”, South Africa’s president told students, acknowledging that a cap on fee increases in 2017 was only part of a short-term strategy. At least half of South Africa’s universities have been shut down out of safety fears as student demonstrators destroy property, throw stones and intimidate staff and other students. While some criticise the police for failing to nip the chaos in the bud, others say university administrators and politicians have not done enough to address the root causes of student unhappiness. With some students expressing a willingness to demonstrate until there is a Marikana-style massacre to make their voices heard, Zuma may have little choice but to deliver on the demand to cut tuition fees. Someone will have to pay. If it is not the students, by repaying loans, it seems inevitable that taxpayers will foot the extra bill. – Jackie Cameron

Johannesburg – President Jacob Zuma on Monday acknowledged flaws in the National Student Financial Aid Scheme and promised that government would attend to them.

“Government continues to support poor students in our system through the consistent expansion of the NSFAS, loans and bursaries. Problems that have been stated by students about NSFAS are also acknowledged and are being attended to,” he said.

He said the call from students had been heard “loudly and clearly” and that since 1994 everything possible was being done to help students from poor households obtain post-school education.

Zuma said government was, however, aware that more needed to be done. The recommended fee increases for 2017 announced last month were part of a short-term strategy.

Higher Education Minister Blade Nzimande announced on September 19 that universities could decide their own fee increases for 2017, but that these had to be capped at 8% and poor students would be exempt.

“We must allow time for this to happen so that lasting solutions will be put in place, that do not in the long-term harm our system and our country.”

The fee increases for 2017 were decided on after consultations. It was not a decision made in haste, he said.

“It was a collective decision of government, built on a firm commitment to more affordable higher education.”

Some student leaders at the summit said his brief address was a sign of an “arrogant government”. After Zuma left, students disrupted proceedings to demand his return.

Some students want their own Marikana – Adam Habib

Johannesburg – Some students are calling for their own version of the Marikana massacre to advance their cause for free education, Wits University Vice Chancellor Adam Habib said on Monday.

“I have listened to some protesters who say that they want their own Marikana. I was engaging a student yesterday who said that people must die to advance the movement,” he said at a summit on higher education.

He urged Police Minister Nathi Nhleko, who was at the event, to ensure those responsible for damage and violence were prosecuted.

“We have had close to a billion rand’s worth of infrastructure burnt at our universities in the last 18 months, and yet not a single person has been arrested and convicted. How many places in the world do you know which would allow such a situation to exist? We have to fix the crisis in policing and prosecution,” Habib told Nhleko.

He expressed disappointment with the presidential Commission of Inquiry into Higher Education and Training. Delays had “aggravated matters” and students were embarking on another round of protests.

In-depth interview with Wits VC Adam Habib: 'We are reaching a point of no return'https://t.co/N4efQlM6Djpic.twitter.com/LtMOvjB2O9

“Despite all these consultations, we don’t have a consensus,” Habib said.

“I’m the bearer of bad news. Sixteen of 26 universities in the country are closed. If this situation does not change, we will not be able to graduate anyone this year. It’s a situation that we cannot afford.”

Habib was speaking before students disrupted the summit to call for President Jacob Zuma to come back.

Earlier on Monday, Zuma made a brief speech in which he said he had instructed police to arrest those involved in the destruction of university property. He called for students to resume their classes.

Students on campuses around the country began protesting after Higher Education Minister Blade Nzimande announced on September 19 that universities could decide their own fee increases for 2017, but that these had to be capped at 8%.

The South African Union of Students was holding meetings with government leaders about the situation.

Cape Town – Protesters outside the UCT law faculty have accused security guards of racially profiling students after they were barred from entering the building on Monday.

“What’s the difference between a student and a protester?” a student leader asked someone from the faculty.

Protesting students claimed that white students had been allowed to attend a lecture inside, while black students were locked outside.

They demanded to speak to the dean.

Two staff members told the crowd that the dean was in a meeting and could not speak to them.

Six people have been arrested following disruptions to classes at the University of Cape Town.

They urged the protesters to set up a meeting with the dean at a later stage.

Someone in the crowd muttered that it was ironic that the law department was pulling an “illegal” move by keeping out paying students.

“Why is it acceptable to continue lectures when you know there are black students outside?” another asked, shaking her head.

The group planned to move from the middle campus back to the upper campus to ensure lectures did not take place.