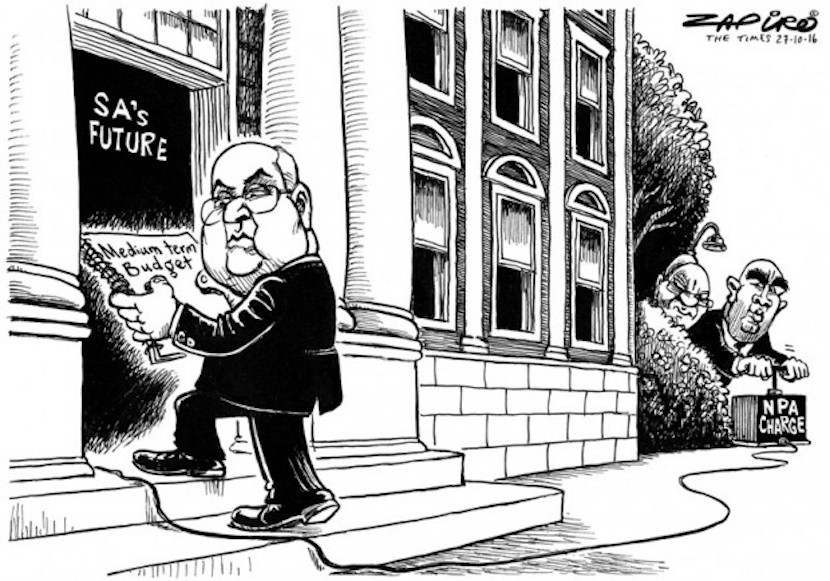 Rumourville has been littered with current Finance Minister Pravin Gordhan’s dismissal, more a case of when, than if. And while the Rand zig zags on such hype, the country and its citizens wait in the wings for President Jacob Zuma’s next move. This time it won’t come from left field like Nenegate, but it may be more devastating. One of the thorns in Zuma’s side, calling for his head, is Sipho Pityana, chairman of AngloGold and leader of Save SA. Pityana’s gloves were off again this morning, much like when he delivered his powerful speech at the memorial service of his close friend, former Eastern Cape Premier Makhenkhesi Stofile. He was speaking at the Cape Town Press Club earlier and Cape Messenger editor Donwald Pressly reports back… – Stuart Lowman

Addressing the Cape Town Press Club at Kelvin Grove, Pityana told an audience of business , media industry people and journalists that Treasury as represented politically by Pravin Gordhan was the “last frontier” for Zuma to cross to gain “unfettered access to the coffers of the state of this country”. Pityana said: “If the ANC…allows the president to run over National Treasury then the ruling party would have sold out SA, not so much the president,” he said.

Referring to Gordhan standing in the way of Zuma, Pityana said: “Pravin Gordhan is not a problem to Zuma because of a shape of his nose. Gordhan is an obstacle to the intentions of the corrupt.”

Asked if the appointment of Brian Molefe – who resigned recently as Eskom chief executive in the political fallout after former Public Protector Thuli Madonsela released her State of Capture report – would represent “an agent of state capture” in government. Pityana said that given the report had implicated Molefe in alleged “shenanigans around state capture”,  if President Zuma were to proceed “to appoint that person…even before we have looked at the implications of that report, (studied) his conduct and all of that…and you (still) appoint that person with a cloud over their head…it would be a categorical statement to the nation”.

Pityana, who is chairperson of AngloGold Ashanti and is a former director general of foreign affairs, said Molefe – who is expected to be sworn in as a Member of Parliament – had stood down from being Eskom CEO “because he thinks that his conduct there betrayed the nation…why would he think that it is right for him to be in a position where he would preside over more state enterprises and the fiscus of the nation?”

Answering an earlier question about when state capture reached a tipping point, he said that point was reached when Treasury was “overrun”. At that point “it will be game over” for South Africa. From that control of the treasury and its related fiscal apparatus there would be no blocking of the controversial nuclear deal with Russia, for example. The Russian nuclear deal had to be stopped at all costs: “If you have no sense of what a nuclear deal will mean for South Africa, think about this. We will work for the Russians for the rest of our lives. Our children will be slaves of the Russians.”

Urging civil society to rise up to defend their constitutional rights and to fight corruption in government and business before it turned into “a cancer”, Pityana argued that treasury – led by Gordhan, the finance minister – had effectively blocked many aspects of state capture. “Treasury is making it difficult for him (Zuma),” said Pityana. Zuma had been blocked from extending state capture which had already made itself felt across government and particularly in state-owned enterprises.

Treasury was still preventing a “bunch of looters” from overrunning government entirely, Pityana argued. He believed the people’s assembly – in November last year centred at St Alban’s cathedral in Pretoria – had played a role in curtailing capture of the state last year. He urged people to turn out in their numbers at St George’s cathedral in Cape Town next Wednesday for another people’s assembly – the day before President’s State of the Nation address.

Pityana said public pressure was needed to ensure that future leaders of the ANC should confirm to the values of decency and honesty. Asked if it could be expected that Cyril Ramaphosa or Nkosazana Dlamini-Zuma could be expected to play noble leadership roles, he said he did not want to individualise the issue by engaging in debates “around the personalities”. But he did add a remark about “a look-alike” – an apparent reference to Nkosazana Dlamini-Zuma – would be bad for the nation.  Pityana did not refer to Dlamini-Zuma by name.

Pityana, who was the first senior ANC supporter to call for the resignation of President Zuma at the funeral of former Eastern Cape premier Makhenkesi Stofile last year, said next week’s state of the nation address would be a clutch of empty promises. “He will roll out another set of promises…with unintelligible numbers, a lot of which he will not be able to read.”

Describing Zuma as the “worst ANC president ever” and as “one big fake news site”, Pityana said that Zuma had presided over the decline of South Africa, rising unemployment – now officially over 27% – and the poor provision of education and health services.