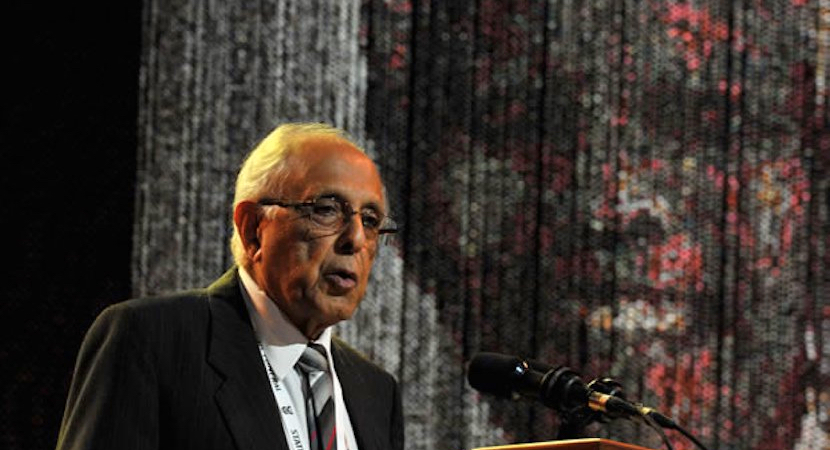 While one cannot draw a line between the demise of the ruling ANC party and the unfortunate circumstances of the death of its stalwarts, it certainly looks so. And as the country mourns the passing of struggle hero Ahmed Kathrada, its leaders are once again putting the country on the abyss, as the Zupta faction looks set to get its hands on the National Treasury cookie jar. And it’s no secret that Kathrada was outspoken against the current top brass, asking President Jacob Zuma to step down in an open letter. And it’s on this basis that the Save South Africa organisation calls on the citizens to stand up and continue Kathrada’s defiance. It’s a sad day in the history of our country, not only as we bid farewell to Kathrada but as the current crop of leaders destroy the ethos of a once proud party. – Stuart Lowman

Today is a day of mourning and sadness. South Africa has lost a world leader, a man of morality, untarnished honesty, self-sacrifice and integrity. A man who fought for a constitution that enshrined a vision of equality, non-racialism and social justice.

On the same day we wake up to further news which makes it increasingly clear that President Jacob Zuma intends to play his final card this week, if not today: to remove one of the few Cabinet Ministers who has stood in the way of his attempts to get unfettered access to the people’s money.

It is widely speculated that Finance Minister Pravin Gordhan will be removed from office, and be replaced by a Gupta surrogate such as Brian Molefe. Zuma has reportedly told leaders from COSATU and the SACP that that is his intention.

The Save South Africa campaign has warned all along that this is Zuma’s ultimate objective: to cast aside a National Treasury leadership with a solid track record of maintaining fiscal discipline and sound economic management in pursuit of inclusive and sustainable growth – just to get unfettered access to the resources managed and protected by National Treasury for himself and his cronies.

This, we believe, is what Zuma really means when he speaks of “radical economic transformation”: a radical, desperate move into overdrive for the state capture project.

Capturing National Treasury would be a selfish, self-serving act that disregards the national interest and the entire democratic project, and undermines the security and sovereignty of our nation. It would be a very real threat to the future of our people. It would plunge even greater numbers of people into unemployment and murderous poverty. It will deepen inequality.

By doing so, Zuma would once again be putting the enrichment of himself, his family and friends before the interests of South Africa and its people.

He and his compradors clearly feel they have not yet siphoned enough public money away from health care, housing, education and social welfare – they want the entire public purse, and in particular the components that will facilitate their nuclear deal, which will likely be the most corrupt procurement deal in our history.

As the Save South Africa campaign, we issue this stark warning: this week could be the tipping point in the state capture project. And South Africa dare not let it pass unchallenged.

South Africa can no longer sit back and watch the rent-seekers loot, loot, and loot again. We call on all South Africans – individuals, organisations and interest groups – who care about the a vision of equality and social justice for our future to join us in showing that we will not stand for this.

Today, we are calling for the formation of a national governance crisis committee, made up of all honest democrats, whatever their background or political beliefs, who object to the pillaging of public money and the perversion of public office to join us in action. We believe our country needs a broad front, of all those committed to the South Africa we believe in, to counter the denigration of the Constitution, the continued corruption and say no to further state capture.

#AhmedKathrada Moseneke: his death siginifies the end of an era of leaders who wanted no personal gain from the liberation movement.

Civil society, labour, business, politicians, public servants and others who care about the future need to get involved and say: This far, and no further.

In the next day or so, we will be consulting with other organisations and leaders, and intend to announce details of our broad, collective response to this, Zuma’s final act of treachery.

In the meantime, we call on all South Africans to honour ‘Uncle Kathy’ by standing up to defend the values and beliefs he pursued all his life.

It is crucial that we stand together, despite any differences, and find common purpose in the fight against state capture.

We have to Save South Africa now — or forever pay the price.