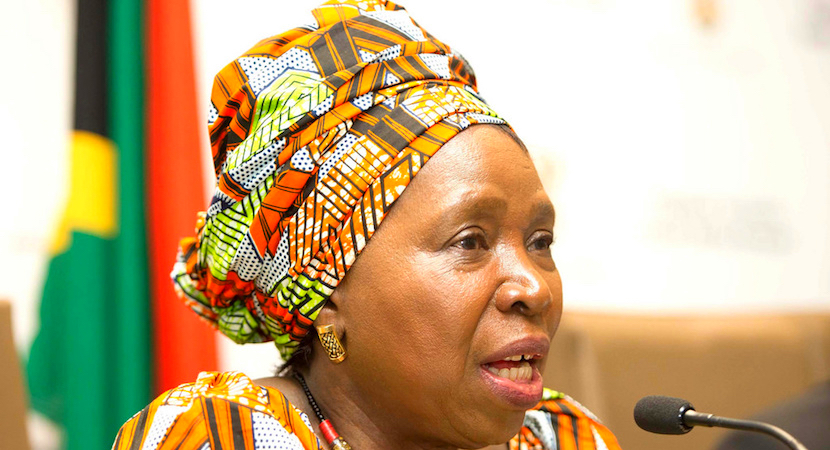 Amid an increasingly heated ANC leadership race, the year 2017 is already going down in South African history as one to remember. In December, the ANC will elect a new leader. It’s come down to a two-horse race between President Jacob Zuma’s ex-wife Nkosazana Dlamini-Zuma and Cyril Ramaphosa. In recent weeks, Dlamini-Zuma has launched what can only be described as an aggressive blitz campaign for the top job as she courts allies such as the ANC Youth League and Women’s League. Conversely, Ramaphosa has gone rather silent and is looking meek after backtracking on his outspoken comments about Zuma’s recent disastrous reshuffle and firing of Gordhan. At this stage, Ramaphosa needs to step up or risk losing out as Dlamini-Zuma is on the march to the Union Buildings. Donwald Pressly, in this piece below, explains how her rise could ensure Jacob Zuma’s control of South Africans’ lives for many more years to come… – Gareth van Zyl

COMMENT: Nkosazana Dlamini-Zuma appears to be the Chosen One of the tenderpreneur faction in the African National Congress to replace her ex-husband as president of the ruling party and, ultimately, president of the Republic of South Africa. Just what makes this woman tick and can she indeed pull this political coup d’etat off? Cape Messenger editor Donwald Pressly considers the possibilities in the wake of her controversial comments in the last few days including that the schools and universities were teaching students that the ruling party was corrupt.

Nkosazana Dlamini-Zuma does not have a spectacular governing pedigree. She first got imprinted in the public mind as a consequence of the scandal surrounding the HIV-Aids play, Sarafina, produced by the department of health at great cost to the taxpayer. She was South Africa’s first post-apartheid Minister of Health and was – at the time – still married to our President Jacob Zuma.

Then Democratic Party MP Mike Ellis – who retired from parliamentary politics in 2011 – pretty much gave her a roasting in Parliament over the scandal. The role she played was silly at best, unedifying at the worst. She went on to be Minister of Home Affairs, then Foreign Affairs (International Relations) and chair of the African Union Commission.

My old friend and human rights activist Rhoda Kadalie says simply the election of Nkosazana would be “a disaster” for South Africa. It is a constant refrain of opposition Democratic Alliance MPs that if the ANC elect her as ANC President, that will be good for the opposition project. Jolly good, they say. The ANC is sure to lose the national election in 2019 if she is the candidate. In the interest of balance, I will quote another old friend, Mzwanele Manyi, the president of the Progressive Professionals’ Forum – an ANC-aligned front – who posted on Facebook that the Business Leadership SA statement is the clearest evidence of state capture by the WMC (White Monopoly Capital). “The cabinet reshuffle has clearly dealt a severe blow to the WMC plunder of state resources.”

He also posts with a photograph of the Business Leadership SA – a voice for big business in South Africa – statement his own tweet: “If there was any doubt of State Capture by WMC, this statement confirms it. Prez Zuma’s cabinet reshuffle has distabilised (sic: destabilised) WMC plunder.”

If there was any doubt of State Capture by WMC, this statement confirms it. Prez Zuma's Cabinet reshuffle has distabilised WMC plunder. pic.twitter.com/bt5XE4cwMj

Under that FB post he carries pictures of Nkosazana Dlamini-Zuma’s address in Sasolburg, in the Free State. The pictures of SABC News television itself carries the headline “Dlamini-Zuma addressed ANC cadre Forum live from Sasolburg, Free State. It shows another picture of Dlamini-Zuma addressing the forum in which the crowd is shown. Manyi adds the FB comment: “Leadership on fire.” There is no doubt where he sees his future bread being buttered – but that is a story for another column.

Just what did she say on this occasion? According to news24, Dlamini-Zuma said kids at South African schools are taught that the ANC is corrupt. Dlamini-Zuma had raised concerns – according to News24 – over what she termed a negative narrative against the governing party, saying the narrative was perpetuated at schools and universities.

Amid controversy about her being provided Presidential Protection Unit security – see lead story in the Sunday Times of 16 April – Dlamini-Zuma is quoted as saying: “The (kids) are actually taught against the ANC.”

It was not surprising “that kids will think the ANC is corrupt, the ANC is useless, because this is what they are fed at school.” At some universities – pointing at the University of the Witwatersrand – she said students were prevented from calling South Africa a democracy. This is indeed, bizarre, as apparently her own daughter attended the institution.

Vytjie Mentor, a former ANC MP and former chair of the parliamentary public enterprises portfolio committee who allegedly was offered a cabinet post by the Gupta family, isn’t an admirer of Dlamini- Zuma – or at least, not any more. On Facebook, she spewed out invective against Dlamini-Zuma in the last few days. “Fikile Mbalula and Nkosazana Zuma must stop telling lies. NDZ (Nkosazana Dlamini-Zuma has had PPU (Presidential Protection Unit) protection for more than a year now. Our paths crossed at different places throughout 2016 where she was having presidential bodyguards. At one time both her and (former president) Kgalema Motlanthe were in the same vicinity and her number of guards and black vehicles far out-numbered those of Kgalema Motlanthe. This was bizarre as Kgalema was once a President and NDZ has never been. I don’t like old people that lie. When you are over 70 years’ old you should know better not to tell lies easily.” It sparked a comment from one of Mentor’s friends who said: Don’t ever accept PPU… Remember what happened to Indira Gandhi?? (Gandhi was assassinated). Another FB friend of Mentor commented: “Even NDZ believes she is the president-in-waiting.”

I remember when NDZ came from exile with JZ (Jacob Zuma) and others … she used to look at the ceiling/roof when addressing the audience. I questioned this periodically and the defence that was offered … “it was a Zulu way of showing respect”. I used to insist that they be given re-training in public speaking. You see, those of us that remained in the country and led MDM (Mass Democratic Movement) structures had to remain keeping our boots on .. had to learn to speak to the masses as we touched the tarmac. NDZ has been very shielded as she was in the executive ever since she returned home, and now that she is not occupying any executive office currently we now get to know her better. We now know that she is not incorruptible, we know that she is a careless and reckless speaker. We now know that she loves power absolutely and that she loves all its trappings like being protected by the PPU unit. We also know that she does not think before she opens her mouth. Being a leader from exile and being in the Executive and cushioned her all along… We know her better now, and she might be wearing a dress, but she will ascent to the Presidency of the Republic over our dead bodies. Mentor continues in a FB post of April 13:

It is sad for a woman to have lived an illustrious life in her early years, only to get badly corrupted around age 70. Poor Nkosazana Dlamini-Zuma. The biggest mistake of her whole life was to marry dirty Zuma and to bear kids for him. Now she is deeply enmeshed and embroiled in the Zuma-empire dirt. She has baited all the bad tactics and strategies hook-line-and-sinker, and she sounds to have become very irrational these days. It’s dangerous to have presidential ambitions like she does as this has made her to become prepared to do and say anything that promises to deliver the presidency to her. History will re-write her life-story as one that began very well, only to end very disastrously. I really feel very sorry for her, poor soul!

Maybe these are the words of a bitter woman? But one suspects that Mentor has captured the essence of the new Dlamini-Zuma. She will do the bidding of the tenderpreneur class that has surrounded President Jacob Zuma. She will also talk about white monopoly capital infecting the SA economy and robbing black people of jobs. Radical economic transformation is the theme to mask a crude populist kleptocracy if she comes to power.

Opposition politicians who say that the ANC will lose power if she is their preferred candidate in December – at the ANC elective conference – may be right, she will be a major recruiting agent for an opposition victory. But can South Africa afford more – at least another two years more – of Zuma by proxy? That is the question.

She would continue to implement voodoo populist economics that has taken over the ANC since Pravin Gordhan was fired in March. Big budgets, big and growing debts, high – if not super – inflation and a plummeting currency. It will mean burgeoning government debt matched by massive impoverishment of the poor and the middle class.

The SACP, ironically an alliance partner of the ruling ANC which has six ministers and two deputy ministers in the national executive, has warned that the ANC structures are infected with corruption. There are fake branches, fake electoral outcomes. We may already have a fake outcome of a Nkosazana Dlamini-Zuma victory wrapped up in December. Zuma and his acolytes seem to be terribly confident of victory of their faction.

The next hurdle that South Africa will face – if indeed Nkosazana wins in December – is getting the entire ANC out of office in 2019. Rhoda Kadalie says we need to keep a close watch on the Independent Electoral Commission. A cloud already hangs over it. One has to wonder whether it is not infected by the state invasion by Zuma forces – as has parts of the judiciary, parts of the investigatory services and even elements of the tax collection agency, SARS. Nkosazana Dlamini-Zuma will be very bad news for rational, well-meaning and honest South Africans. Good people in SA – but particularly in the ruling ANC – need to stand up against her victory both in December and in 2019.