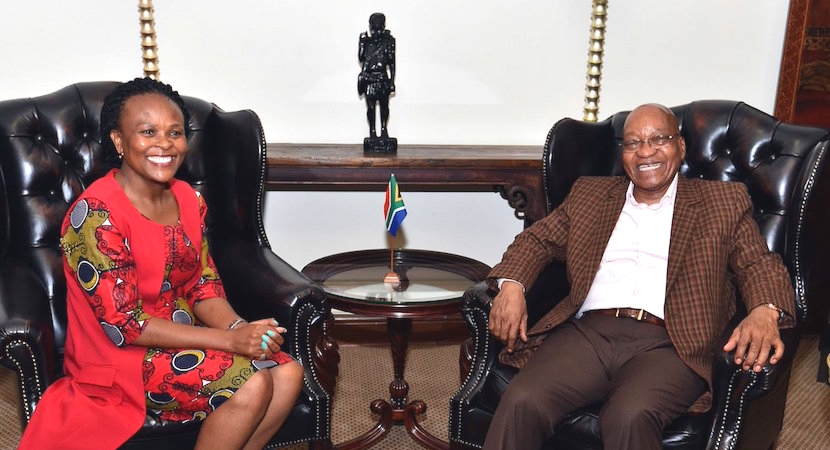 JOHANNESBURG — At first, commentators thought that Public Protector Busisiwe Mkhwebane’s bid to interfere with the Reserve Bank’s independence earlier this year was just owing to sheer incompetence. However, bombshell court papers filed by the Reserve Bank indicate that she conspired with none other than a number one Zuptoid and his lawyers to draft an attack plan against SARB. She also allegedly conspired with spies in this attack. I’ve said it before and I’ll say it again: It’s time for Mkwhebane to quit or be fired – Gareth van Zyl

(Bloomberg) – The country’s graft ombudsman used a probe into an apartheid-era bailout of a lender to attack the South African Reserve Bank and didn’t disclose a meeting with lawyers in President Jacob Zuma’s office to discuss the investigation before its findings were released, the central bank said.

Public Protector Busisiwe Mkhwebane instructed lawmakers in a June 19 report to amend the constitution to make the bank focus on the “socioeconomic well-being of the citizens” rather than inflation. This followed her probe into CIEX consultancy’s report on the bank’s bailout of Bankorp, which Barclays Africa Group’s Absa bought in 1992. She told Absa to repay R1.125bn ($87 million). The High Court set aside her instruction to change the central bank’s mandate last month.

By May, the investigation had turned “to an attack on the Reserve Bank” and not just an investigation into whether Absa should repay the bailout, central bank Advocate Johann de Jager said in court papers filed Sept. 11. “This attack is evidence of bias or at least a reasonable apprehension of bias on the part of the Public Protector. It also shows that her remedial action had an ulterior purpose.”

The 96-year-old bank has become a scapegoat for the economic woes of Africa’s most-industrialised economy, which had its second recession in almost a decade this year. Many investors took Mkhwebane’s findings as a threat to its independence, causing the rand to decline.

The Public Protector’s record of proceedings of her probe are “woefully incomplete,” and didn’t disclose the June 7 meeting with the presidency to discuss her report, which is “a glaring omission,” the advocate said.

A document in the record about a meeting with “SSA,” which De Jager takes to be a reference to the State Security Agency, contains a note in a section dealing with the Reserve Bank with the question “how are they vulnerable,” he said.

“It is unclear on what possible basis the vulnerability of the Reserve Bank was relevant to the Public Protector’s investigation into the CIEX report,” he said. “The fact that this topic was even discussed with the State Security Agency indicates that the Public Protector’s investigation was aimed at undermining the Reserve Bank.”

Cleo Mosana, a spokeswoman for the Public Protector, said by email that she was unable to comment because the matter is before the courts.