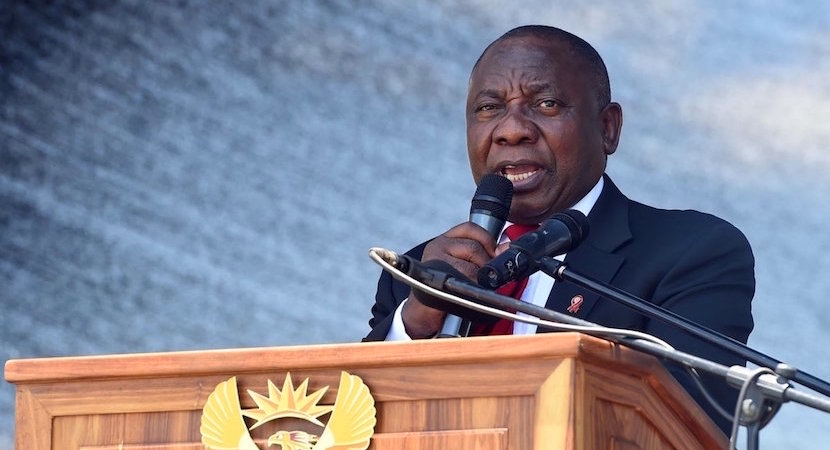 CAPE TOWN — To use a fly-fishing analogy appropriate to Cyril Ramaphosa’s chosen past-time, he’s hoping to succeed in cleaning up a polluted river and that prize trout will soon joyfully snatch his carefully crafted fly floating atop our turbulent political waters. The only problem is the polluted waters. South Africa’s leading political analysts seem to believe the sludge is clearing, with or without Ramaphosa’s belated efforts. There’s less place to hide for the bottom feeders and the analysts now have him as the frontrunner, well ahead of Nkosazana Dlamini-Zuma. It’s a marked change from seven months ago when they didn’t fancy his chances of beating the successor Zuma most wants to secure his exit strategy and help keep the sewage farm running. It will be fascinating to see how the gloves come off in KwaZulu-Natal where the Zuptoid supporting provincial cabinet is hanging on by a court-appeal thread after being told by a judge that they were illegally elected. The Ramaphosa-supporting faction are – but for the incumbent KZN cabinet’s court appeal – the de-jure rulers of one of the most influential provinces, come this December’s ANC elective conference. It’s going to get a whole lot rougher before the waters of our body politic can perhaps sustain decent life. – Chris Bateman

by Mike Cohen and Paul Vecchiatto

(Bloomberg) – South African Deputy President Cyril Ramaphosa has an edge in the race to become the next leader of the ruling African National Congress, according to a survey of analysts.

Sixteen of 26 analysts canvassed by Bloomberg named Ramaphosa as the front-runner to take over the helm of the party from President Jacob Zuma at its national conference in December, while five expect Nkosazana Dlamini-Zuma, the former chairwoman of the African Union Commission and the president’s ex-wife, to win. One put Jeff Radebe, a minister in the presidency, ahead and four said it was too soon or impossible to select a likely winner.

The survey, conducted on Tuesday and Wednesday, gauged the views of political science professors and lecturers from eight South African universities, country risk advisers and research-group analysts. Expectations of a Ramaphosa victory have increased markedly since a February survey, when 10 analysts put him in the lead, 11 said Dlamini-Zuma was ahead and six said they couldn’t identify a front-runner. 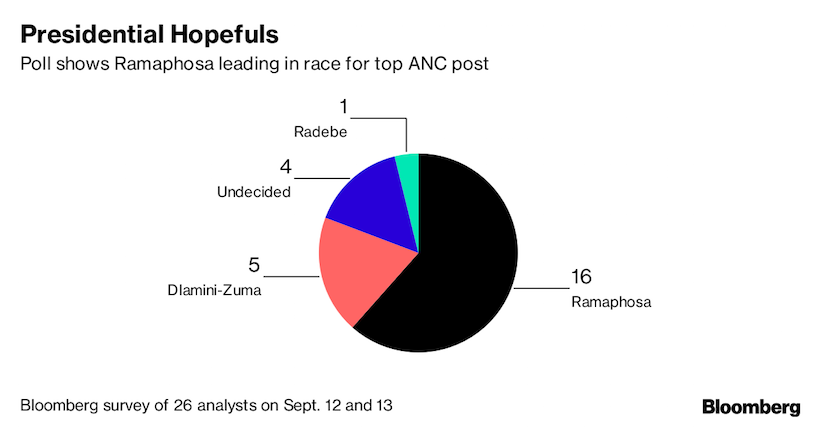 “Ramaphosa’s fortunes have risen because he has declared his hand and is campaigning openly,” said Daryl Glaser, a political science professor at the University of the Witwatersrand in Johannesburg. “Public esteem for Dlamini-Zuma has crashed because she has been closely associated with Zuma but I certainly wouldn’t write her off.”

The 105-year-old ANC has won more than 60 percent of the vote in every national election since it took power in 1994, placing its next leader in pole position to replace Zuma, 75, as the nation’s president when his second and final term ends in 2019.

Zuma, who’s been dogged by scandals during his eight years in office, has indicated that he wants Dlamini-Zuma to succeed him and several of his closest allies, including the ANC’s women’s and youth leagues, have aligned themselves with her campaign.

While Ramaphosa’s campaign has focused on the need to combat corruption, Dlamini-Zuma has largely been silent on the issue and has echoed Zuma’s call for “radical economic transformation” to address racial income disparities dating back to apartheid rule. The deputy president has secured the backing of the Congress of South African Trade Unions, the country’s largest labor group, and party leaders in the Northern Cape province.

Nominations for the ANC presidency are due to formally open later this month. Other officials who’ve declared their candidacies are Baleka Mbete, the speaker of Parliament, Zweli Mkhize, the ANC’s treasurer-general who announced last week he would accept the nomination, and Human Settlements Minister Lindiwe Sisulu.

Ramaphosa, 64, is a lawyer who co-founded the National Union of Mineworkers, helped negotiate a peaceful end to apartheid and led the drafting of South Africa’s first democratic constitution. He lost out to Thabo Mbeki in the contest to succeed Nelson Mandela as president in 1999 and went into business, amassing a fortune before returning to full-time politics in 2012 when he became the ANC deputy president.

Dlamini-Zuma, 68, qualified as a medical doctor, and served as minister of health, foreign affairs and home affairs before being elected to head the AU Commission in 2012. She and Zuma were divorced in 1998 and have four children together.