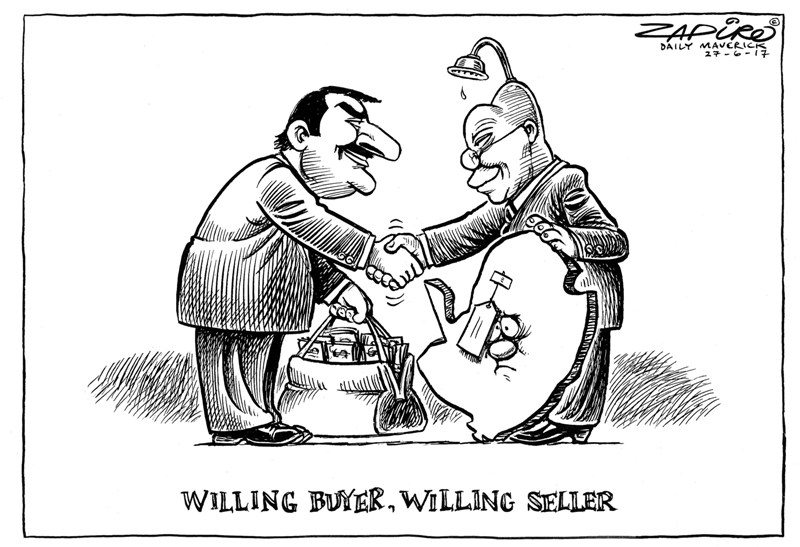 JOHANNESBURG — An apology is just not good enough, is the message spreading its way across South Africa, following KPMG SA’s senior executive clear out. And while promises of donations may appease a few, it’s the many that were severely impacted by the hatchet-job of a SARS rogue report. Today was another small win in South Africa’s fight against state capture. A big week which also saw UK public relations firm Bell Pottinger file for administration – at the heart of creating the ultimate distraction called ‘white monopoly capital’. The activist group Save SA has been building the pressure with Sipho Pityana at the helm, gaining global prominence after featuring in the London Financial Times. And while the organisation is pleased with KPMG’s public accountability, it just isn’t good enough. But it’s a lesson for those corporates who haven’t come clean yet, to do so, because the truth will out. – Stuart Lowman

KPMG’s collusion with the real rogues in SARS has destabilised our finance ministry, compromised SARS and resulted in loss of some of the finest public servants. The adequacy of the steps they’ve taken today must be measured against this damaging impact on South Africa.

Their experience over the past few days should serve as a reminder to all South African corporates that they will be held accountable – whether today, tomorrow or next year – for collaborating with state capture.

After intense public pressure, KPMG has been forced to get rid of nine executives, retract its hugely damaging report on SARS, attempt to deal with fundamental reputational damage, and an offer to “pay back the money”.

As Save South Africa, we are encouraged by the outcomes of our campaign against KPMG, and the impact of people’s pressure. We are also very pleased with this public accountability – but it’s not good enough.

This is a lesson that all those already implicated in state capture – such as SAP and McKinsey – should take to heart, and quickly. They must ensure the same level of responsibility and accountability, at the very least, or face the same pressure that forced KPMG to respond.

They are already on borrowed time.

For those who have yet to be identified in state capture projects, we say: Come clean now. Spill the beans – or face the same public embarrassment and pressure as Bell Pottinger, KPMG, SAP and McKinsey.

We will continue to pressurize SAP and McKinsey to ensure they own up to their collaboration with the Guptas, and that they face the consequences. We will also continue to demand that South African corporates isolate the Guptas and all companies that do business with them, such as KPMG.

And we will continue to insist that the Guptas and their adopted son, Duduzane Zuma, should be charged, jailed or deported for their central role in state capture.

We believe no amount of retraction of financial penance can make up for the damage to our political ecosystem, our government, our revenue service and our National Treasury.

KPMG’s SARS report was a hatchet-job, a weapon to create political division and deal with those fighting against state capture and the looting of state resources. It provided ammunition for a purge of some of our finest and honest leaders and government officials.

We will probably never know the full consequences of the damage caused by that report. And for that reason, we will never be able to fully accept an apology put forward by the guns-for-hire who ran KPMG.