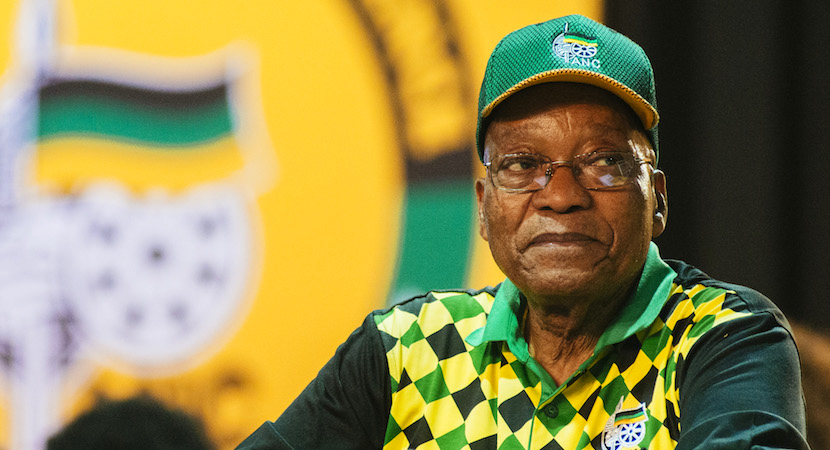 EDINBURGH — Jacob Zuma was successfully ousted as president just over a year ago, but his legacy of corruption has a long tail. As Marianne Thamm reports for the Daily Maverick, individuals close to Zuma appear to have been involved in an elaborate plan to siphon R45m through the police service to buy votes. The plot centres around a police contract allegedly irregularly awarded – and at an inflated price. The Independent Police Investigative Directorate (IPID) believes money was to be laundered for the purchasing of votes at the ANC’s national conference in December 2017. The scandal emerged in court papers. – Jackie Cameron

While the ruling party, now led by President Cyril Ramaphosa, gears up for its week of annual January 8 celebrations, culminating on Saturday 12 January at the Moses Mabhida Stadium in Durban, the cosmic debris from its life-or-death 54th elective conference in 2017 keeps pockmarking the political landscape.

Behind the scenes, the Independent Police Investigative Directorate, headed by Robert McBride, is locked in a legal battle with SAPS and the Directorate for Priority Crime Investigation (DPCI) in an attempt to access files which IPID maintains have been “classified” for the purpose of covering up alleged corruption and criminality in the lead-up to Nasrec. Actually, not only in that instance (the attempted R45m Nasrec slush fund) but also others, where, says IPID, public funds were laundered through Crime Intelligence (CI) to buy votes at ANC elective conferences.

The bid to divert the R45m had been, says IPID in court papers, at the insistence of then CI acting head, General King Bhoyi Ngcobo.

Ngcobo was previously Head of VIP Protection Services and one of President Jacob Zuma’s “most trusted bodyguards”.

Ngcobo was appointed by Zuma to the top job in August 2017, four months before the Nasrec conference.

August 2017 was also the month when Zuma emerged triumphant when a no-confidence vote by secret ballot in the National Assembly failed with 198 votes against the no-confidence vote, 177 for, with nine abstentions.

Those who might find themselves criminally charged include Ngcobo as well as former Minister of Police Fikile Mbalula’s adviser, Bongani “Bo” Mbindwane, who, according to court papers, was present at a secret meeting at the Courtyard Hotel in Arcadia, Pretoria, on 13 December 2017, three days before the ANC’s 54th elective conference.

The meeting, captured on the hotel’s CCTV, had been arranged to expedite the procurement of a R45m grabber – a powerful eavesdropping device.

The court papers contain correspondence between IPID, IGI, Bheki Cele and legal representatives of those implicated. The papers claim the SAPS top brass and Mbindwane met Inbanathan Kistiah, owner of Brainwave projects 1323CC, Trading as I-View Integrated systems, from whom a R45m “grabber” was being sourced.

The device sells for about R7m on the open market.

Sitole immediately stopped payment to I-View when IPID contacted and alerted him shortly after the Pretoria meeting as to the illegality of the procurement. It was a heist, IPID told Sitole in not so many words – an inside job that should in no way be approved.

“This practice is highly irregular for the Minister’s adviser to attend a procurement meeting with SAPS management and this has raised suspicions.”

The outcome of the IPID investigation could have serious consequences for many high-profile ANC members as well as senior SAPS officials. To say nothing of the damage to the governing party, which has been accused of syphoning off public funds to finance factional battles.

While SAPS and the Hawks have stalled handing over the classified documents to IPID for almost a year, Cele and Dintwe have been corresponding with one another. Dintwe told Cele he was of the opinion that the documents could not be classified as they did not threaten “national security”. This has been the suggestion by those implicated.

“It is absurd for an institution to refuse declassification of documents for purposes of processing a criminal investigation or criminal trial, especially when the courts have always been willing to put measures in place to mitigate possible damage due to disclosure of sensitive information whilst at the same time ensuring the continuation of the criminal process.”

IPID is also attempting to obtain information about CI operative Captain Morris “KGB” Tshabalala as well as former CI head, Richard Mdluli. IPID had previously exposed that Tshabalala had been the bagman for Operation Hibela, aimed at swinging the ANC’s 2012 Mangaung elective conference in favour of Jacob Zuma. (His opponent at the time was Kgalema Motlanthe.) In 2012 Tshabalala is alleged to have been part of a team dispatched to distribute around R52m in cash at Mangaung.

Another potentially fraudulent SAPS procurement matter IPID is investigating is an irregular R33m tender with Brainwave Projects which took place between 20 December 2016 and 31 March 2017. In this instance, CI procured from I-View (which was under business rescue at the time) an encrypting system, Daedalus, for R21m. Daedalus blocked surveillance of user SMSes and calls.

IPID head Robert McBride, in court papers, claimed that “IPID has reason to believe that Daedalus was obtained specifically to block IPID’s surveillance of the cellphone communications between former National Commissioner Lieutenant-General [Khomotso] Phahlane and a team of SAPS detectives from the North West Province (led by Major-General Jan Mabula) which General Phahlane appointed to counter and obstruct IPID’s investigation against him for alleged fraud and corruption.”

With regard to the pre-Nasrec (December 2017) meeting in Pretoria, Dintwe wrote to Cele:

“I opine that charges of defeating the ends of justice may be considered for any person who is an impediment to the investigation which is underway, and driven by the IPID.”

In court documents, IPID set out how it bust the inner circle at the hotel. Investigators had received information that the purpose of the meeting “was to discuss the emergency procurement of a cellphone grabbing device at a bloated amount of R45m.”

Of course, said IPID, “no need existed for the emergency procurement of the device and no needs analysis was conducted by the commander of the unit responsible for procuring such devices. He was never informed.”

Since then attempts by IPID to obtain statements from those implicated, including Mbindwane, have been resisted, with CI management and SAPS “refusing to submit statements as requested” claiming the information is classified.

“It is not clear how requesting a statement explaining the attendees (sic) involvement in the meeting is deemed to be classified,” IPID wrote to Minister Cele.

Cele had, in the meantime, requested an opinion from the IGI, saying that his thoughts would be dependent on Dintwe’s view “regarding the possible impact on National Security by the intended declassification of documents in question”.

Dintwe told Cele that “the departure point in this regard is Paragraph 3 of the National Policy of Security, commonly known as Minimum Information Security Standards (MISS), which sets out guidelines on the procedure for safe custody of documents, classification thereof and the process of declassification of documents”.

The MISS document, said Dintwe, provided an explanation on the classification of documents with the particular injunction that “security measures are not intended and should not be applied to cover up maladministration, corruption, criminal action etc or to protect individuals/officials involved in such cases…”

Dintwe told Cele that “in instances of suspicion of criminality involving classified documents, the Divisional Commissioner and/or the National Commissioner are duty-bound to reconsider the earlier classification of documents and should be inclined in favour of declassification of documents in order to allow for proper and unhindered investigation and possible criminal prosecution”.

With regard to information on Tshabalala, Dintwe wrote: “There appears to be nothing that may adversely affect the national security of the country. Information that I am privy to is that Captain Lesiba Maurice Tshabalala was just earning a salary and was not involved in any intelligence operations.”

However, with regard to Mdluli, Dintwe said:

“I am of the opinion that the information being requested by the IPID does not have the potential to harmfully affect the national security. The requested Mdluli documents relate to procurement, administrative and travel matters, and not intelligence operations.”

Sitole, Tsumane, Vuma and Mbindwane have all said that classified documents can only be “sought by and disclosed” by the Joint Standing Committee on Intelligence (a closed committee) and that disclosure to IPID, or anyone else, would be prohibited by the Intelligence Oversight Act.

While Tsumane and Mbindwane had initially told IPID they would co-operate, they later withdrew.

Tsumane and Mbindwane, through their legal representative, informed IPID that their meeting at the Pretoria hotel had related to “issues that fall within the ambit of the National Strategic Intelligence Act 39 of 1994 and its regulations” and that they “cannot answer any questions from any body or institution other than the Joint Standing Committee on Intelligence”.

IPID then applied for a subpoena to compel the two men to engage.

McBride said that the information and documents had to do with a suspected crime, “specifically tender fraud”, and that “the alleged ‘classified documents’ have been unlawfully and improperly classified to cover up the commission of suspected crimes”.

IPID, McBride and Dintwe reminded all concerned, have the top-secret security clearance required to deal with such classified matters.

The possible syphoning off of public funds for the benefit of the ANC is also under scrutiny with regard to another last-minute, irregular signing off by acting Sassa CEO Pearl Bhengu, of a R20m procurement, a week before Nasrec in 2017.

Bhengu was the former head of Sassa in KwaZulu-Natal. In the end, R12m of the R20m sudden procurement was spent. The apparent irregularity only came to light in a report back to the Standing Committee on Public Accounts (Scopa). DM