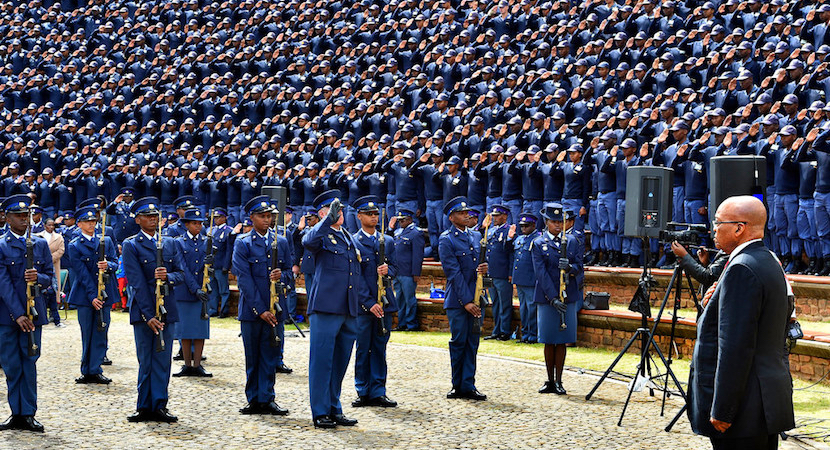 JOHANNESBURG — Late last year, a scandal erupted at local listed IT firm EOH amid its links to controversial businessman Keith Keating. EOH cut ties with Keating but several questions have remained. And this story from the Daily Maverick reveals how Keating has held such power with government contracts that was able to switch off South African Police Service’s IT systems. It’s clearly not only the Guptas who have compromised the state. – Gareth van Zyl

Director General of Posts and Telecommunications, Robert Nkuna, told Scopa that the beleaguered agency, which has had more than 10 CEOs since its establishment in 1999 and which fell under his department, was being “repurposed” due to continued instability. (To say nothing of the risk it posed to the safety, security and sovereignty of the South African state.)

In April this year, Forensic Data Analysts CEO Keith Keating tripped the switch of critical SAPS IT systems because his company had not been paid R11 million he claimed was owed pending a forensic investigation into contracts worth billions entered into by his company with SITA and SAPS.

Earlier this month a system failure at SITA resulted in the crash of IT in all government departments, including Home Affairs. SITA CEO Dr Setumo Mohapi said that the initial crash on 10 August had been caused by a power outage in the City Of Tshwane. Later it was discovered that SITA’s own backup generator had run low on diesel and that the fuel pump had seized as a result.

“The big question is, is this crisis inherent in the system and the nature of the organisation? When you move the procurement of IT into one entity it was always bound to happen that the entity would experience these challenges,” said Nkuna.

The department, added Nkuna, had since obtained Cabinet approval “for the repurposing of SITA” and that procurement, in future, needed to be “taken out of SITA”.

“SITA services the whole of the public service. We believe we can do that without losing value for money. That is what we are exploring now. An entity that will set standards for the whole of government and act as a regulator when government departments procure on their own”.

SITA’s role was technological innovation and transformation and the storage of government information.

“We are putting together a business case for the new entity,” said Nkuna.

SAPS, SITA, as well as the Independent Police Investigative Directorate (IPID) were due to report back to Scopa on Tuesday with regard to progress arising from a massive forensic investigation of procurement irregularities and contracts awarded to Keating’s Forensic Data Analysts as well as other affiliates.

The investigation into SITA has so far cost taxpayers R4.3-million. A total of 40 cases involving 25 employees had been made. There have also been 12 dismissals, 21 resignations, three final written warnings, one finalised disciplinary (still awaiting outcome) and two ongoing disciplinary hearings of SITA employees. Over and above this, 17 matters had been handed by investigators to SITA “for further consideration of the findings”.

Restriction of trade letters involving five companies and their directors had also been sent to treasury by SITA. In some instances SITA found that senior employees in supply chain management, who were linked to these companies, had not declared this and were using SITA offices and equipment to conduct business.

Mohapi informed the committee on Tuesday that SITA was currently engaged in “active litigation” against Keating’s Forensic Data Analysts and was of the opinion that the agency had a enough evidence to lay a claim against some of the money spent on “purported work”.

SITA had approached the court for a review application to set aside contracts entered into with Forensic Data Analysts. The matter, which was heard on 20 August, has been postponed indefinitely to allow parties to submit documents.

“The judge has acknowledged the gravity of the situation and the application might be heard by a full bench of the high court,” said Mohapi.

He acknowledged that SITA, as required by National Treasury, had not tested the market to prove value for money when entering into contracts with Forensic Data Analysts or its affiliates.

“There was a fair amount of misrepresentation of what the system was about.”

After the shutdown of the SAPS system by Keating in April, National Police Commissioner General Khehla Sitole (who did not attend Tuesday’s Scopa hearing) had requested a full forensic analysis.

“We found that SITA personnel tasked with looking after technical equipment had limited knowledge of how the system was configured or even where the server was located,” Mohapi admitted.

In fact the server, at first, could not be located at all and only Forensic Data Analysts knew of its whereabouts.

“There was a dangerous and unhealthy reliance on Forensic Data Analysts. Documents, when we found them, were out of date and unusable. We also found that Forensic Data Analysts personnel had super user rights and could do anything and everything with the system. Nobody in the state system had the right codes.”

Transactional codes to access the system had been “generic”, allowing changes to be made to data without detection. In essence, SITA had transferred its duties to someone else.

“The implications are grave. We have to brief the minister,” said Mohapi.

He added that SITA found that there was limited documentation about the maintenance of systems, that there was poor data and user management and an “extremely old system” that was never properly maintained.

“It is an immature system for its largeness.”

Asked by DA committee member Tim Brauteseth – who has been at the forefront of exposing the Forensic Data Analysts contracts with SITA and SAPS – whether he would agree that there was “definitive” proof that SITA had been captured, Mohapi replied emphatically “yes”.

IPID director Robert McBride, who was due to report back to Scopa on numerous high profile cases it is investigating in relation to Keating, Phahlane and several other top SAPS officers, said that the directorate was still having trouble extracting “classified” information from the DPCI.

“The IPID team, the DPCI and SAPS are working well in spite of efforts to sabotage the team,” said McBride.

The IPID investigation had, he said, in the meantime been expanded to Namibia where some of the “money laundering” had taken place.

There was, however, a “complete resistance with regard to the declassification of documents” from National Police Commissioner Sitole, including those pertaining to former Crime Intelligence head Richard Mdluli and a matter involving R45-million “in a case to interfere with the democratic process”

He had turned to the Inspector General of Intelligence, Setlhomamaru Dintwe, for help and had been informed that these were “matters of procurement” and not about “secret projects”.

“There is no harm or threat to national security. It is still being resisted. We are at litigation stage,” said McBride.

IPID scored a major victory in June when the North Gauteng High Court ruled in its favour preventing SAPS members who had a personal interest in cases from investigating IPID members. McBride said that case law had been made in that matter and that the judge had suggested that the ruling should be included in new legislation on IPID currently working its way through Parliament.

He said a third case was about to be heard in the high court in relation to the classification of documents.

“If we win that case it might open the floodgates,” said McBride.