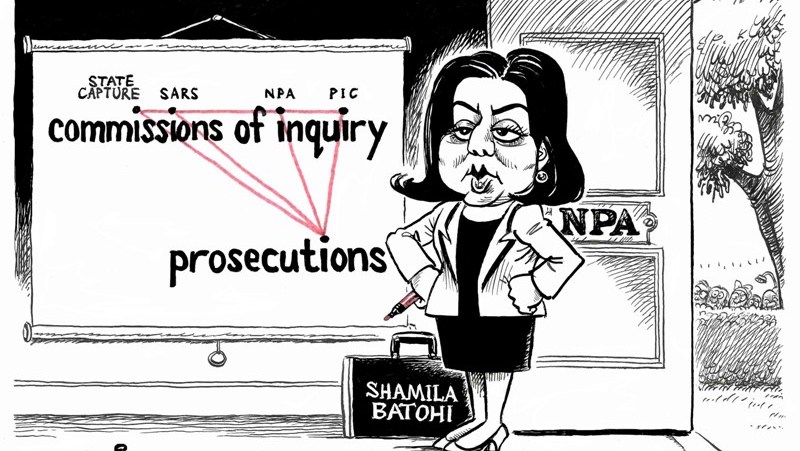 CAPE TOWN — Anybody who still maintains that President Cyril Ramaphosa is moving too slowly on transforming the core institutions of accountability needs to take note of the Mokgoro Inquiry recommendation that’s led to him immediately firing two key Zuptoids in the NPA. Unfit to hold office and candidates for immediate removal are two top National Prosecuting Authority officials, Nomgcobo Jiba and Lawrence Mrwebi, intoned Judge Yvonne Mokgoro on Wednesday, giving Ramaphosa until Friday to remove them. As the Deputy National Director of Public Prosecution (DNDPP), Jiba was effectively the nation’s number two prosecutor; and Mrewbi just behind her in seniority as Special Director of Public Prosecution (SDPP). Both have been on suspension since October 26th last year. According to the star witness at the Zondo Commission,  former COO of Bosasa, Angelo Agrizzi, Jiba was getting a cool R100,000 per month in untraceable notes with Mrwebi paid off with a monthly cash payment of R10,000. Back to Ramaphosa. He set up the Mokgoro Inquiry’s terms of reference on November 9th last year, very shortly after the duo were suspended. Although these two dodgy NPA characters are not wearing orange overalls yet, that’s impressive progress…The second of our stories is courtesy of the Daily Maverick. – Chris Bateman

(Bloomberg) – South African President Cyril Ramaphosa fired two senior prosecutors who were implicated in taking bribes in his latest move to restore the integrity of the National Prosecuting Authority that was badly damaged during his predecessor Jacob Zuma’s rule.

Ramaphosa took the decision to fire Nomgcobo Jiba, who served as deputy national director of public prosecutions, and Lawrence Mrwebi, the special director of public prosecutions, after studying the findings of a commission of inquiry. The decision could help repair public and investor confidence in Africa’s most-industrialised economy, and follows the appointment of new leaders of state institutions linked to mismanagement, including the NPA and the nation’s tax agency.

“The inquiry has found that both officials are not fit and proper to hold their respective offices,” Ramaphosa’s office said in an emailed statement.

In January, Angelo Agrizzi, the former chief operating officer of services company Bosasa, told another judicial probe that the company has paid bribes to the two prosecutors to help it evade graft charges and secure confidential information. Jiba received a monthly payoff of R100,000 ($6,940), while Mrwebi was paid R10,000, Agrizzi said. The officials denied the allegations.

Ramaphosa, 66, was appointed president 14 months ago when the ruling party forced Zuma to step down after a tenure that was marred by repeated corruption scandals, inappropriate appointments and policy missteps.

In December, he named Shamila Batohi, a former legal adviser at the Hague-based International Criminal Court, as the chief prosecutor – an appointment that was widely hailed a first step toward rebuilding the NPA and holding officials implicated in looting state funds during Zuma’s tenure to account.

Jiba and Mrwebi not fit and proper to hold office at NPA, report recommends dismissal

Held over a period of four weeks in February 2019, the inquiry heard damning testimony from current and retired public officials from the prosecution services regarding the pair’s conduct when handling high profile criminal cases.

Regarding Jiba, the inquiry found that in her capacity as DNDPP and during her short stint as Acting National Director of Public Prosecutions back in 2011, “she compromised her integrity and consequently cannot be trusted with the responsibility of the office that she holds”.

“In her capacity as acting NDPP, she failed to comply with court processes within the stipulated time frame and drew strong criticism for displaying a lack of candour in her submissions and for failing to take the court into her confidence,” the inquiry report states.

“Despite initiating the prosecution” in the Booysen matter, the report found that “she did not consult with the KZN Director of Public Prosecution on whose jurisdiction the case fell and whose approval was required”.

“Her conduct indicates a lack of conscientiousness” and “her actions do not accord with the requirements set out under section 9(1) of the NPA Act,” said the report.

According to the panel, Jiba “failed to explain the exact process that had been followed” in the Booysen prosecution and “her approach to the litigation was misleading” and therefore “undermined the principles of a high standard of professional ethics, accountability and transparency”.

However, the report also noted that by making a finding that Jiba “failed to exercise her discretion in authorising the proceeding” of the case, it does not make any suggestions as to the guilt or innocence of Booysen.

When the Mdluli case was dropped by the NPA in 2011, the inquiry found that Jiba had refused “to consider (an) extensive memorandum presented to her” by Glynnis Breytenbach, a former prosecutor at the NPA who argued that there was a prima facie case to prosecute.

Breytenbach is now current Shadow Minister of Justice for the Democratic Alliance and has since called for the prosecution of Jiba and Mrwebi following the findings of the report.

“If the report findings are correct, then President Cyril Ramaphosa can do nothing else but fire them both, and the NPA should give serious consideration to prosecuting them both,” wrote Breytenbach in a statement.

During Breytenbach’s tenure at the NPA, Jiba was the acting NDPP and according to the report, she played a “function in the discontinuation of criminal proceedings” against Mdluli which “demonstrated a failure to properly exercise her discretion”.

And although the Supreme Court of Appeals (SCA) had previously found that “she was not bound to follow the advice contained in the memorandum” on appeal in the case brought against her by the General Council of the Bar (GCB), she was required, however, “to have a rational explanation as to why she opted not to consider the memorandum at all”, says the report.

The report further notes that because Jiba failed to review the decision taken by Mrwebi to withdraw the charges against Mdluli, she “failed to display the required competence and capacity required to fulfil her duties” and her “conduct had the effect of seriously damaging public confidence in the NPA”.

It is on this basis that the inquiry found that Jiba is “not fit and proper” to hold office at the NPA. The matter on whether she is fit to practice as an advocate is still being litigated in the Constitutional Court.

“The series of Jiba’s decisions taken in her capacity as acting NDPP, which were all set aside on reviews, the comments and criticism levelled against her by the courts have brought the NPA into disrepute,” said the report.

Regarding Mrwebi, the Mokgoro Inquiry found that in his capacity as Special Director of Public Prosecutions (SDPP), his “conduct was openly at variance” with what is expected of a person in his position.

As the SDPP he “decided to withdraw the prosecution of Mdluli without consulting” his direct superior, Sibongile Mzinyathi, the North Gauteng Director of Public Prosecutions, who testified at the inquiry.

When giving his version of the phrase “in consultation with” the report notes that he gave “contradictory explanations” on whether Mzinyathi’s approval was required before he could drop the charges.

When he took up the position of SDPP on 1 November 2011, he received representation from Mdluli’s lawyers regarding the case and “immediately called for the docket and memorandum”.

The report notes that he soon after took a decision to withdraw the charges by 5 December without consulting with Mzinyathi.

“He acted contrary to the provisions of the NPA Act” which requires him to reach a consensus with Mzinyathi on whether to drop the charges, says the report.

He took representation from criminal suspects implicated in the investigation, kept it secret and by his own admission took those representations into account when withdrawing the charges without verifying the truthfulness of their contents, the report states.

In light of these findings, the inquiry concluded that “his decision to withdraw the prosecution of Mdluli was irrational and unlawful”.

Not only did the inquiry conclude that this “showed that (Mrwebi) lacked an understanding of the law and the legal process but that he did not properly exercise his discretion and did not act with integrity as required under section 9 of the NPA Act”.

“His attitude shows that he did not respect court processes and proceedings as expected from a special director,” Mokgoro found in her report.

There should have been an “extensive police investigation” before a prosecution is withdrawn on the grounds that there is no reasonable prospect of a successful prosecution, said the report.

“As established by the evidence, Mrwebi cared little about the merits of the Mdluli case or whether a successful prosecution was reasonably possible,” Mokgoro found.

“His lack of understanding of the law and legal process surrounding the Mdluli prosecution shows that he did not display the required competence and capacity to fulfil his duties,” Mokgoro’s report states.

And because both Jiba and Mrwebi “failed to introspect and reflect on the issue which beset the NPA with their involvement” although they have been involved in their “personal and official capacities” the inquiry has recommended that the President removes them from their positions in the prosecuting authority.

It is now up to Ramaphosa, who had given Jiba and Mrwebi until 16 April to make additional presentations to him on the report’s findings, on whether to institute the Mokgoro Inquiry’s recommendation. DM

Freedom Under Law (FUL) believes that the President’s decision to remove Nomgcobo Jiba and Lawrence Mrwebi from their positions at the National Prosecuting Authority, is in keeping with the recommendations contained in the report issued by the Mokgoro Enquiry, and offers an opportunity for restoration of public confidence and trust in that embattled institution.

Under the leadership of new National Director of Public Prosecution (NDPP) Shamila Batohi, the NPA can today begin in earnest a process of rebuilding the institution, free of the corrupting influences of Ms Jiba and Mr Mrwebi. As the report of the Mokgoro Enquiry makes clear, not only were Ms Jiba and Mr Mrwebi found unfit to hold office but showed themselves not to have the integrity, conscientiousness and scrupulous honesty required of such senior officials in an institution so important to our constitutional democracy.

As is evident from the report and other information publicly disclosed about the workings of the NPA during Ms Jiba and Mr Mrwebi’s time there, they were not the only officials responsible for wrongdoing. But they were central to the wrongdoing and in sidelining and in several instances persecuting those employees within the NPA intent on performing their constitutional operations, Jiba and Mrwebi’s corrupting influence was magnified. Freed of their presence, decent people in the NPA may now get on with their jobs and the tasks required by our Constitution.