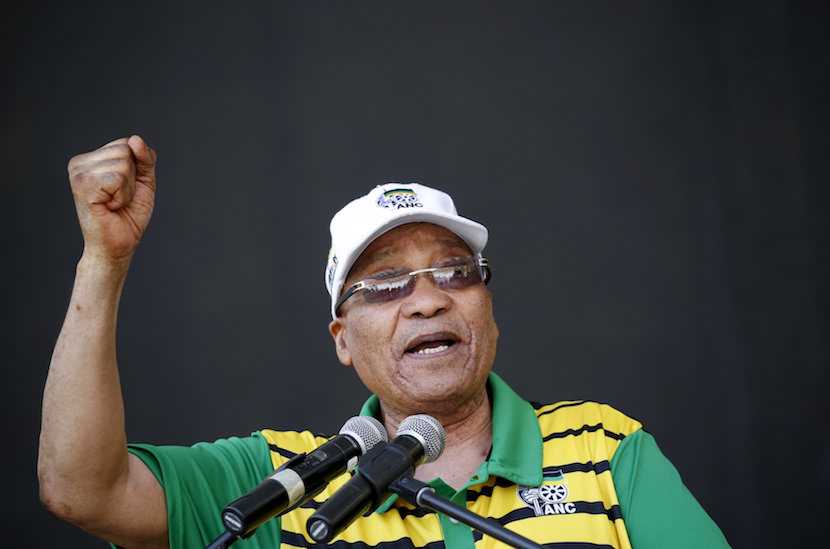 History is replete with examples of the powerfully toxic mix of religion and politics. South Africa has its fair share of those drawing on a cynically-convenient interpretation of Christianity. You need only recall the apparent “Christian Nationalism” of apartheid. Today we have a strobe-light example  – one that gets too little probing media attention – in Jacob Zuma, for the past dozen years an ordained honorary pastor of the Full Gospel Church (neatly covering his presidential tenure). University of Stellenbosch social anthropologist, Illana van Wyk, unpacks the neo-Pentecostal theme, used to huge advantage by several other high-profile, often-despotic African political leaders. Its prosperity gospel, which explains Zuma’s perception as a ‘blessed” man is hugely popular. This gospel of holy entitlement conveniently spurns all opposition as “the work of the devil.” An 11-year-old poll concluded that a third of urban SAs are Neo-Pentecostalist. Today’s figure is almost certainly higher. Witness the millions of Zionists who flock to Moria near Polokwane over Easter and in September and it’s easy to grasp the power and appeal of religion among the less financially endowed. Not surprisingly, SA politicians have been Moria regulars from the National Party days. Story courtesy of The Conversation. – Chris Bateman

Jacob Zuma, South Africa’s former president, has long been known as a man who lives beyond his means. Interestingly, this has made him a much-admired figure in the country’s neo-Pentecostal circles.

Media exposés have laid bare Zuma’s massive debts and the financial burden of his large family. Taxpayers footed a multi-million Rand bill for unlawful upgrades to his private residence. Zuma has featured prominently in a number of state inquiries. One of them is a commission probing the “capture” of the South African state for the financial gain of his family and his associates.

While Zuma has avoided any convictions, his detractors have been outraged at his lack of shame. He’s also been defiant in the face of various criminal charges. Instead of shame, Zuma has often boasted of God’s divine support when matters went his way and complained of dark plots when they did not.

While mainline Christian churches were uncomfortable with such claims, neo-Pentecostal church leaders generally supported Zuma. Whenever he faced political scrutiny for a growing number of scandals, they offered their pulpits as his political platforms. They also held protest marches to show their support.

Zuma’s religious utterances presented a conundrum for scholars. That’s because many poor South African Christians supported his moral claims, and celebrated his defiance. Outside the courts where Zuma faced criminal charges, supporters often likened him to Jesus, decried his “crucifixion” and convened prayer vigils.

What lies behind such adulation? And why were these supporters not outraged at Zuma’s private extravagance, profligacy and brushes with the law?

Zuma and the prosperity gospel

While academics have looked at various dimensions of Zuma’s public support, few have taken its religious dimensions seriously. A number of critics have dismissed his religious utterances as mere political populism; another shameless tactic to avoid taking responsibility for his supposed moral decrepitude.

My chapter in the newly published book, “Conspicuous Consumption in Africa”, deals with Zuma’s “shamelessness” and his continued political support. It takes a closer look at the prosperity gospel to which he has so often referred.

Zuma is well versed in this gospel. Apart from his longstanding membership of various neo-Pentecostal churches, he was ordained as an honorary pastor in the Full Gospel Church in 2007. I make no judgements about his personal commitment to neo-Pentecostal values. Nevertheless, my research shows that members of these churches recognised in Zuma’s reckless spending behaviour, his uncompromising fight against dark “enemies” and his political invincibility, the marks of a “blessed” man.

It’s an ethic that demands of its subscribers that they consume conspicuously and without “shame” as “blessed” Christians. At the same time, they have to wage spiritual war on those who undermine their “good fortune”.

Neo-Pentecostalism found enormous traction in many African countries from the late 1970s onwards. It’s also popular beyond Africa. But it was only after apartheid that South Africans started flocking to these churches. Precise figures are lacking, but a Pew Forum poll in 2006 suggested that over 30% of urban South Africans subscribed to neo-Pentecostalism. Thirteen years later, that figure is much higher.

As Zuma increasingly fudged the lines between his political and spiritual struggles, his fellow politicians responded in increasingly “religious” ways. Political lackeys sympathised with his “persecution” and saw it as the dark work of invisible forces and evil conspirators.

Even Zuma’s political enemies increasingly claimed that his continued rule was due to occult powers. Thus the public space in South Africa, as in other African countries, became increasingly “Pentecostalised”.

As African studies scholar, Adriaan van Klinken, has noted, charismatic Pentecostal Christianity is a “public religion par excellence”. As it engages with social and political issues, it reshapes the public sphere as the scene of a spiritual battle between God and the Devil.

Zuma’s public life has much in common with flamboyant political leaders and former leaders on the continent who have publicly declared their membership, leadership or support of Neo-Pentecostal churches. These leaders include Teodoro Obiang Nguema Mbasogo, of Equatorial Guinea, Yoweri Museveni of Uganda and Jerry Rawlings, Ghana’s former long-term military ruler.

On the close alliance between some African leaders and neo-Pentecostal churches, Paul Gifford, a professor of religion and philosophy, has remarked that this “domesticated Christianity”, was not “concerned with a renewed order or a ‘new Jerusalem’”.

Neo-Pentecostals are thus unlike previous Christian movements such as black liberation theology that advocated for social justice and the alleviation of poverty. Instead, they individualise the causes of material and political suffering. Followers are urged to fight the Devil rather than push for radical reform. This makes them deeply conservative political subjects.

In the case of Zuma, a specifically neo-Pentecostal ethic has emboldened him to celebrate his conspicuous consumption and political invincibility. This, as scores of his religious followers aspire to similar feats of spiritual accomplishment.