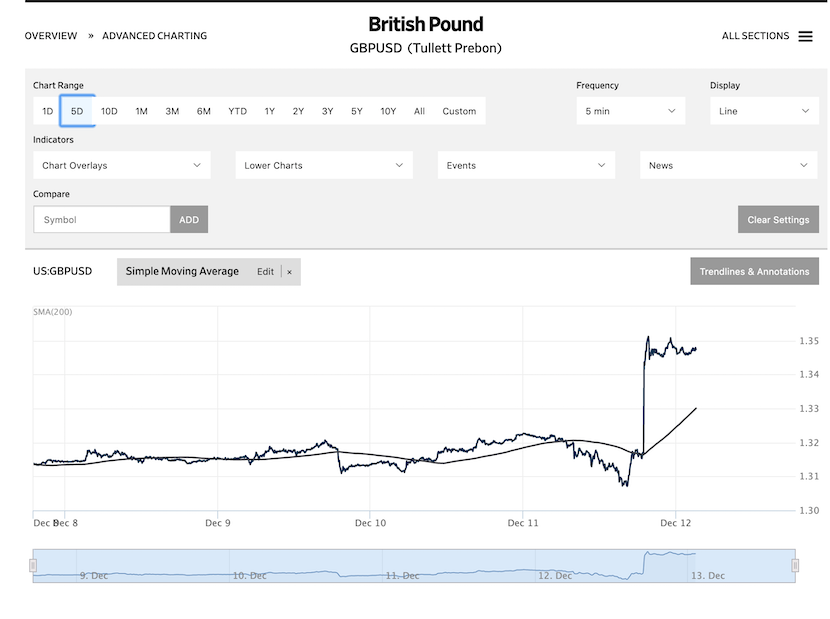 It’s ten days short of three and a half years since the British voted by 52-48 to leave the European Union. The result led to the immediate resignation of prime minister David Cameron and knocked the value of the Pound, dropping it from the 10-year average of around $1.60 to a low of $1.20. In the uncertainty during the months leading up to yesterday’s election, the currency once again tested those depressed levels as some punters projected a victory for a coalition led by Labour Party leader Jeremy Corbyn who campaigned on introducing hard left ideology sure to adversely impact the UK economy. The pound rose strongly in the wake of this morning’s news of a historic realignment of British politics where many working class seats have switched across to the Conservative Party whose leader Boris Johnson has the mandate to enact Brexit next month. The South African Rand is also firmer on anticipation of improved prospects for one of its major trading partners – the currency jumping over 30c against the US Dollar from Tuesday’s pre-poll level. – Alec Hogg

It’s that time of year where young, immature minds believed that a grey haired bearded man would bring them lots of free gifts. Meanwhile, everyone else voted for Boris Johnson. – Paul O’Sullivan (founder, Forensics for Justice)

Boris Johnson’s next Brexit steps: Get it done, then define it

(Bloomberg) – Boris Johnson’s election victory will allow him to get Brexit done. He now has to decide what it means in practice.

The size of his parliamentary majority gives Johnson a free rein to take Britain out of the European Union in January after almost four years of gridlock.

The decisive win means he can also define Britain’s future relationship with the EU.

Congratulations to Boris Johnson on his great WIN! Britain and the United States will now be free to strike a massive new Trade Deal after BREXIT. This deal has the potential to be far bigger and more lucrative than any deal that could be made with the E.U. Celebrate Boris!

Beyond repeatedly telling voters he wants to get Brexit out of the way in order to proceed with his domestic agenda, Johnson was notably reticent during the campaign about what it will mean in practice. Once Britain leaves, he will first need to strike a trade deal with the EU by the end of 2020.

If Johnson wants access to the bloc’s single market, he will have to give up control in some areas – in particular taxation, labour and environmental standards. Hard-liners in his party are likely to object to that, and push for a clean break at the end of the year. But a big majority could allow him to marginalise them and cut a deal that keeps the UK more closely aligned with the EU.

At stake is what kind of country Britain will be in a decade’s time: one that looks much like any other EU country – or another in which it looks something like Singapore, with a lower-tax and lightly regulated economy. Johnson’s premiership will be defined by these tensions.Whatever happens, Brexit won’t be done by Jan. 31. Here are the next steps for Johnson:

Lawmakers return to Parliament on Dec. 17 and Johnson will want to move rapidly to enact the Withdrawal Agreement Bill, the formal legislation taking Britain out of the EU. First, though, he will have to pass a Queen’s Speech – proving he has the confidence of the House of Commons – so the Brexit law may have to wait until the new year.

Given all his candidates have promised to support the legislation, Johnson is unlikely to face obstacles in the Commons. Convention dictates that the unelected House of Lords refrains from blocking policies that are included in party manifestos – but Brexit has shown past practice can count for little.

Johnson will need to steer the legislation through parliament before Jan. 31, otherwise Britain would crash out of the EU without any agreement in place. Then the country will enter a transition period, during which time almost all EU rules will continue to apply. It will feel like nothing has changed.

Johnson’s focus will then turn to negotiating a new trade relationship with the EU. He will be working against the clock, having just 11 months to negotiate a comprehensive free trade agreement – a process which normally takes several years.

First, he will need to hold a Parliamentary vote on his negotiating objectives. He may face pressure here from the hard-liners in his own party, who yearn for the freedom to diverge from EU standards. Then he will need to appoint a negotiating team.

The EU will also need to agree its negotiating mandate before talks start. Getting these approvals will eat into the transition period.

The contradiction Johnson will have to resolve in the trade is his desire for both autonomy from EU rules and access to the single market. The EU has indicated it is willing to give Britain a zero-tariff, zero-quota deal – on condition the UK doesn’t become a lightly-regulated Singapore-on-Thames.

The EU is also likely to take a tough line on key priorities for big member states like France and Spain. Expect to hear more on access to fishing waters and the status of Gibraltar, the tiny British territory to which Madrid lays claim.

The UK and the EU have until July 1 to decide whether to extend the transition period by up to a further two years, if both sides need more time for negotiations.

The Conservatives ruled out extending the transition in their manifesto – even though trade experts say completing a comprehensive agreement by the end of 2020 is highly unlikely. That leaves open the risk that Britain could still crash out without a trade agreement in place. But, with his majority, Johnson could just decide to extend the transition period.

If the transition isn’t extended, the UK and the EU will face an intense six months to finalise a deal. The danger for Johnson in this period is that he will come under pressure to cede to the EU’s demands in areas such as fishing and food standards in order to avoid crashing out without a deal, Ivan Rogers, the UK’s former ambassador to the EU, warned in a lecture in November.

The House of Commons will have to approve the future relationship agreement. Each of the EU’s 27 national parliaments as well the EU Parliament itself will have to ratify it too.

The Start of a New Relationship? – January 2021

The first day of 2021 should mark the start of the UK’s relationship with the EU. Either a future relationship deal will be in place – or the UK will default to trading with the EU on basic World Trade Organisation terms. This would look much like a no-deal Brexit.

For Johnson, the risk is this timetable slips – allowing Brexit to go on sucking the oxygen out of political debate. His bet is that the logistics of negotiating a trade deal prove far less controversial than the act of leaving itself.