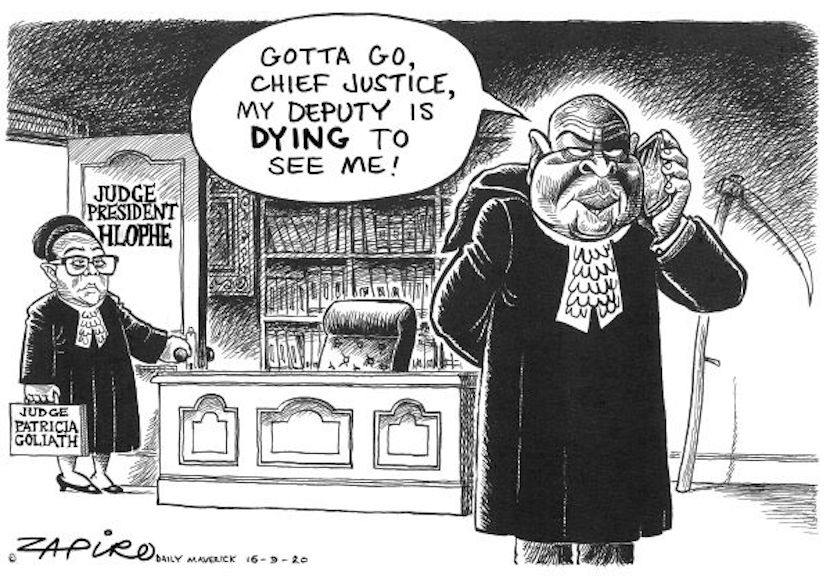 Judge John Hlophe stands accused of trying to influence Constitutional Court judges in a case involving erstwhile president Jacob Zuma. In 2008, the entire bench laid a complaint of gross misconduct against Hlophe after he attempted to improperly influence the court to reach decisions that would favour the former ANC leader. Other accusations include the verbal abuse of two judges and assault. After several delays in proceedings, Judge Hlophe is still sitting pretty in his position as Judge President, 12 years after the complaint was lodged. The tribunal is scheduled to resume in December but after postponing for more than a decade, it’s likely the goalpost will be moved again. Chuck Stephens asks the question: in a land where prejudice is clearly stronger than justice, who will judge the judges? – Claire Badenhorst

As you can see, we get our word “custodian” from the Latin word for “judge”. That is really what they are – magistrates, judges, justices, ombudswomen and men. They should be our “custodians”.

But who judges them? The big battle in the High Court in the Western Cape suggests that when push comes to shove, judges are scrappers too. Just like everyone else. The insults thrown against the Chief Justice by a High Court judge under investigation are appalling. And as in politics, until convicted, this judge has no intention of standing down. He appears to be incorrigible.

At the local level, I have sent more than one “Report of Improper Conduct” to the Magistrates Commission. In fact, I have sent three. The complaint form can be found on the MC’s website. It asks for written complaints – it’s not an anonymous corruption-hotline like you find in other settings.

The first time, they responded that the only way to challenge one magistrate’s over-ruling of another magistrate is to “send it on Review”. (Surely one magistrate does not have the authority to over-rule another magistrate from the next town?) That is expensive and time-consuming. The offended party must then hire a lawyer, who contacts an Advocate, who then prepares and sends the matter on Review. Over a year later, I still don’t have an answer on that one.

This feels to me like a mechanism whereby the Judiciary protects itself. Guilty or innocent, the complainant will lose. Even if his complaint is valid, he gets hit right in the wallet.

The second complaint that I sent to the Magistrates Commission was swallowed. I got a polite response that it had been forwarded to their “Ethics Division”. That was almost two months ago. Still no response.

My third try was this month of October. This time, my complaint was deflected. It was forwarded to our province’s Chief Magistrate, and the Department of Justice. Bureaucrats are great at playing dodge-ball.

In South Africa, when they “cut the red tape”, they cut it length-wise!

A second proverb comes to mind – “where there is smoke, there is usually fire”. I am not a lawyer, so my complaints are not written in “legaleze”. I write from the heart, and maybe judges would prefer that I write from the head? But the very word “complaint” carries with it a modicum of emotional content. You feel injured, after all.

I believe all three complaints were valid and should have been investigated, but law enforcement never finishes what you start. It’s useless. The whole set-up is about self-preservation. These departments exist to employ people, not to fight crime.

Now let me share a third proverb: “When there is peace in the land, the chief does not carry a shield”.

If you read the news, you will know that South Africa is quite a dangerous place. In the past two years, we have had eight burglaries in our immediate vicinity. In one of these, I shot a burglar in the hall outside my bedroom. He had broken a window, cut through the burglar bars, entered my home while I was sleeping, and pried open a locked door to this hallway. He wasn’t coming down the hall to give me a good night kiss.

I had never before even pointed a gun at a human being. But I am sure glad I had it. Because calling the police at 3am is a waste of time. All they do is come the next morning – after the shift change – and take a brief statement. Then they SMS a case number to you and later an investigating officer’s name. Then it ends.

Just like sending a complaint about improper conduct of a magistrate – it just vaporizes.

We have opened cases of daylight robbery. We know who was stealing. They were observed by witnesses. But in the weekly meetings between police and prosecutors, to assess which cases to investigate, these cases are dropped. It’s a Catch-22! If you witnessed a crime and didn’t engage the perpetrator then and there, on the spot, then it was not a crime. You are reporting a domestic dispute, and the police don’t handle those.

So what do we do? When I am pulling out weeds in the garden with my right hand, I have a gun in my left hand. When I sit out in the boma with soup and a sandwich, my gun is lying on the table. When someone comes to the gate, and I don’t recognize the car, I go to the gate carrying a gun in my hand. Welcome to South Africa!

“When there is peace in the land, the chief does not carry a shield”. There is no peace where I live. It’s Criminals 1 – Police no score. And if you do catch a criminal, the courts are for sale. It’s all about gender and race bias. Lady Justice is no longer wearing her blindfold. Prejudice is stronger than justice.