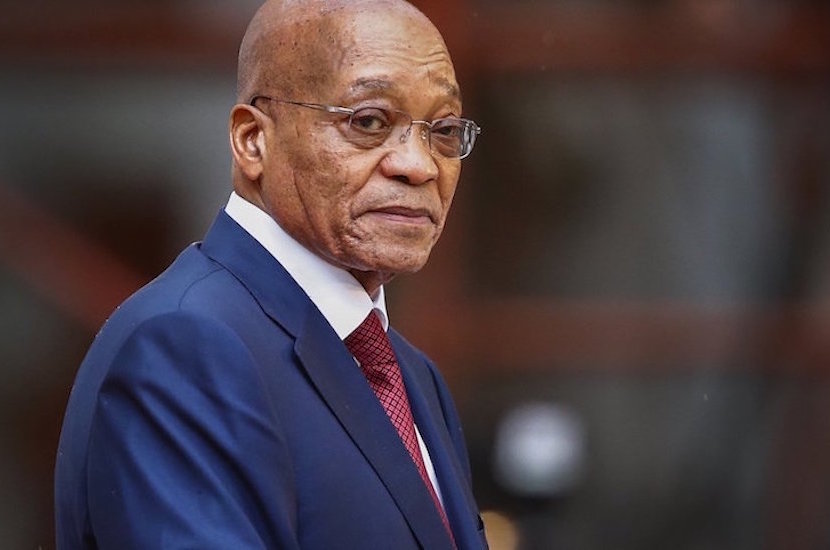 South Africa’s Constitutional Democracy landed its biggest blow last night with the arrest of corrupt former ANC and national president Jacob Zuma. The former political leader’s facilitation of State Capture has been documented in evidence presented over months to the Zondo Commission. Zuma’s jail term relates to his refusal to respond to the evidence by appearing before the Commission. That resulted in a contempt of court finding later which, on appeal, was upheld by SA’s Constitutional Court. The symbolic relevance of the once all-powerful Zuma’s arrest is significant. The London Financial Times reports this morning that “His jailing marked a turning point for the ANC and Cyril Ramaphosa who has pledged to rebuild state institutions.” Zuma, who denies wrongdoing, says being sent to jail at his age during the coronavirus pandemic is “the same as sentencing me to death.” – Alec Hogg

(Bloomberg) – Former South African President Jacob Zuma, who was convicted on contempt-of-court charges last week, was taken into police custody to begin serving his 15-month jail sentence after he failed in a last-ditch bid to delay his incarceration.

The confirmation that Zuma has been detained came shortly after the expiry of a Constitutional Court deadline that he be jailed by midnight on Wednesday.

“I can confirm he is in police custody,” police spokesman Vish Naidoo said by phone from Pretoria, the capital. “I cannot say which prison he will go to because the Department of Correctional Services will do that.”

Earlier Zuma’s foundation said Zuma had decided to hand himself in to the authorities. “President Zuma has decided to comply with the incarceration order,” it said on Twitter. “He is on his way to hand himself into a correctional services facility” in the eastern KwaZulu-Natal province.

The Constitutional Court on June 29 found Zuma guilty of violating its order to testify before a judicial panel that’s probing graft during his rule. It agreed to consider the ex-president’s application to review that judgment, with a hearing scheduled for July 12, but that concession doesn’t suspend his sanction.

The ex-president’s lawyer wrote to acting Chief Justice Raymond Zondo on Wednesday requesting that his arrest be postponed, but he never responded. The High Court is considering a separate application aimed at ensuring he remains free pending his case review, but it is only due to deliver judgment on July 9, and it’s unclear whether it has jurisdiction.

Zuma remains an influential political figure in South Africa, and his case has been a key test for the country’s democracy and its resolve to uphold the rule of law. A former intelligence operative, he led South Africa for almost nine scandal-marred years until the ruling African National Congress forced him to step down in 2018 to stem a loss of electoral support. The government estimates that more than R500bn ($35bn) was stolen from state coffers during his rule. He denies wrongdoing.

Throngs of Zuma’s backers gathered outside his home prior to the July 4 deadline for him to hand himself in and vowed to block his arrest, though their numbers have since dwindled. The ANC on Tuesday distanced itself from Zuma’s attempt to discredit the Constitutional Court, and slated his supporters’ threats to resort to violence to prevent the authorities from taking him into custody.

Jacob Zuma sentenced to 15 months – “I had my doubts that this day would ever come”, says Karam Singh

Former President Zuma gets 15 months behind bars for contempt

SLR: A chronicle of Zuma’s conspiracies