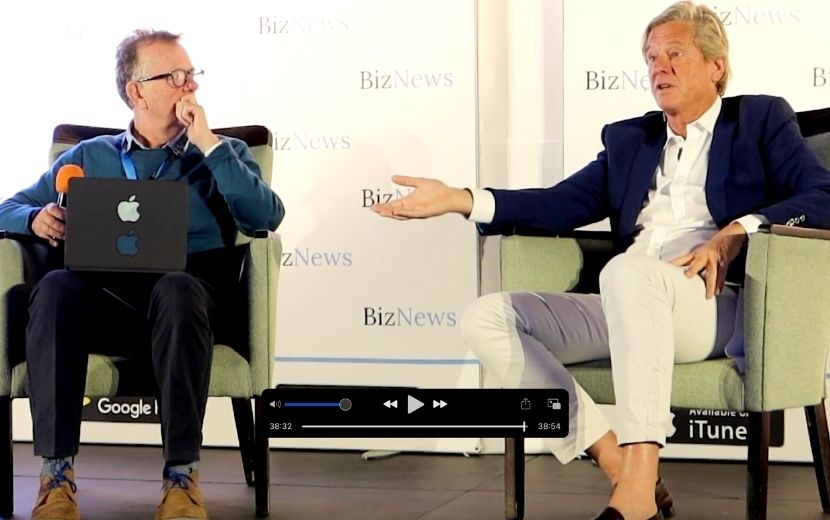 Rob Hersov was one of the keynote speakers at the BizNews Investment Conference (BNIC#2) in the Drakensberg earlier this month. After his presentation, the wildly outspoken billionaire sat down with BizNews founder Alec Hogg for a Q&A. The discussion which followed – which included questions posed to Hersov by delegates at BNIC#2 – is one you simply do not want to miss. Hersov’s absolute candour is sure to rustle some feathers, it is hard not to find such unfettered frankness – at the very least – refreshing. – Nadya Swart

Rob Hersov on whether he would change his mind about South Africa if the Western Cape were to become an independent country:

Look, I’d feel very sorry for the rest of South Africa. You’d be stuck with the ANC and you’d go down the plug a lot faster than you are now. But look, it is a bit of a pipe dream – but it’s not impossible. South Africa signed up in 1994 to all the international regulations that allow for independence.

And when you look at the happiness index, or the countries that you most likely would like to be born in; they’re all countries of five to 10 million people, a somewhat homogenous culture, one dominant language, one dominant religion. It’s the Swedens, the New Zealands, the Switzerlands and the Denmarks of the world – [they] are the best countries in the world to be born into.

So the Cape would have five or so million people, a somewhat homogenous culture, a main language which is Afrikaans, and I think [it] could be a very sustainable country. It would be the Rwanda of the South.

On whether his investments in South Africa indicate that he holds hope for a Mandela moment:

The majority of my wealth is overseas. The majority of my income is overseas and will stay over there. So, this is more optionality. You know, I love living here. I don’t want to leave. I want the ANC to know that I’m not going anywhere. I’m as African as they are and I’m not leaving this country.

But, you know, I wasn’t going to invest in longer-term projects in this country. They’re highly risky, you know, with EWC hanging over our heads and me insulting all the people that matter in the aviation business in South Africa. I’m not sure that’s the smartest thing to be doing, but I’ve got to tell the truth and hopefully they’ll be fired for their incompetence before my project is even halfway through.

On him comparing himself to Mance Rayder from Game of Thrones and whether there is any concern that he may befall the same fate (Mance Rayder was burned at the stake and died with an arrow in his heart – by one of his own people):

Yes, there is. So Mance Rayder was this character that most people had forgotten about (if you know Game of Thrones). Mance Rayder was an officer of the war who crossed the war, he went the other way, the other direction, and united all the disparate tribes, – the giants and the wildlings – knowing that when the ultimate battle came, that would be a decisive factor.

And Mance Rayder pulled everyone together and made the difference in the decisive battle against (they’re called) the White Walkers. The most evil. But we won’t go into that analogy for South Africa.

And he got killed at the stake for his contribution. So I have gone the other way to everyone else I know. I’ve come back to the country. I’m investing long-term. I’m calling out and naming names of the people who are not standing up to fight the bad guys.

On big business leaders in SA not standing up against Ramaphosa:

The big business people in this country are not standing up and defending you. They’re not standing up and calling Cyril out for his incompetence, his moving slowly. He’s playing this bullshit long game and letting this country deteriorate. You know, take Moss Ngoasheng – sucking at the teat of Black Empowerment… Made a fortune. Does he ever say a word against Cyril? No.

Adrian Gore, he’s a hero – he’s a business hero. But when does he stand up and shoot down NHI? Or stand up and say, ‘Cyril, you’re doing the wrong thing.’ He should be standing up – not you and not me. He and Moss Ngoashend and hundreds like him keep very, very quiet. They are the cowards of this country.

Rob Hersov on criticism against the DA:

So I know lots of the DA people; Dianne Kohler Barnard, Beverley Schafer, Glynnis Breytenbach. [They’re] all – every single day – working hard and fighting on our behalf. You know, John, Steenhuisen – he was right in the midst among Andrew Jarvie and Jason (McCormick] and everyone else; standing up and fronting up on behalf of average civilians, protecting their rights, you know, when Cyril was distant and lost. When everybody else was gone, the DA was right there on the ground.

On why the DA does not support Cape Independence:

Because they’re trying to save South Africa and not just the Cape. And it is a bit selfish, you know. I know a lot of people that live in Durban – Nick Johnson, for example. He’ll fly down and do his business in the Cape, but he loves being in Durban. He’s never going to move to the Cape. So by taking the Cape Independent, we jettisoning great people like Nick Johnson – leaving him out to dry. If the Cape goes independent, South Africa will go down the plug in seconds. Gone.

At least with the Western Province being part of South Africa, we can keep pointing out to the ANC and ANC voters that the only municipalities, the only cities and the only province that is well-run, where potholes are filled on the roads, is the Western Province. Why? Because it’s run by the DA. The ANC has no idea how to run a municipality, a city or a province. They only know how to break and steal. You’ve got to have the DA sitting there, showing the ANC that they actually have no idea what they’re doing.

I know [him] very well. He’s a fantastic guy. He’s a businessman. We hosted him at an Invest Africa event at the encouragement of some Zambians to say, ‘This is a great guy.’ And I interviewed him – and he is a great guy. I mean, he would be sitting here in this room, one of us. He’s an entrepreneur, he’s a businessman – but he’s committed himself. He went to jail. He stayed the course and he’s now President of Zambia. The same with Lazarus [Chakwera] in Malawi. These are two great people. Can the same thing happen in Zimbabwe, can the same thing happen in South Africa? I have my doubts.

Rob Hersov on the reason that big business leaders in SA are not showing any sign of pushback against the government:

So during apartheid, Harry Oppenheimer – the most powerful businessmen – stood up. And, on an ongoing basis, vocally attacked the Nats (National Party) and he took them on – followed by a whole lot of other business people. It’s not happening under this ANC regime.

Where’s Sim Tshabalala? The head of the biggest bank in Africa. Silent. You know, I’ve used Moss Ngoasheng as a good example. Silent. Adrian Gore – silent. They’re not doing anything. They’re either being co-opted or they’re fearful of something, you know – fearful of losing their next BEE contract, fearful of not being part of the NHI and being a tenderpreneur. Or fearful of the leftists attacking them from within.

You know, we talk about – I talk about – the ANC being the great evil. But around us we have a lot of leftists, feminists (the new definition) and that evil left – the critical race theory being stuffed down… Bishops and Herschel, in my backyard, have hired this dreadful consultant who is stuffing critical race theory down teachers and kids throats at our schools. And no one’s standing up against them. Me, again – you know, I’ve been branded, whatever I’ve been branded as … So there’s just this fear across the board or apathy or … I don’t know what it is.

But also, all the big voices that should be speaking have left. They’ve either left personally – gone overseas, financially emigrated (but haven’t filled out the form, as Martin [Freeman] said yesterday, or they’ve just lost it, they’ve just said, ‘I’m not going to fight this battle on my own.’ It’s terrible. Who is fighting the battle? Brave journalists. You know, crusaders individual crusaders. And a couple of lunatics like myself.