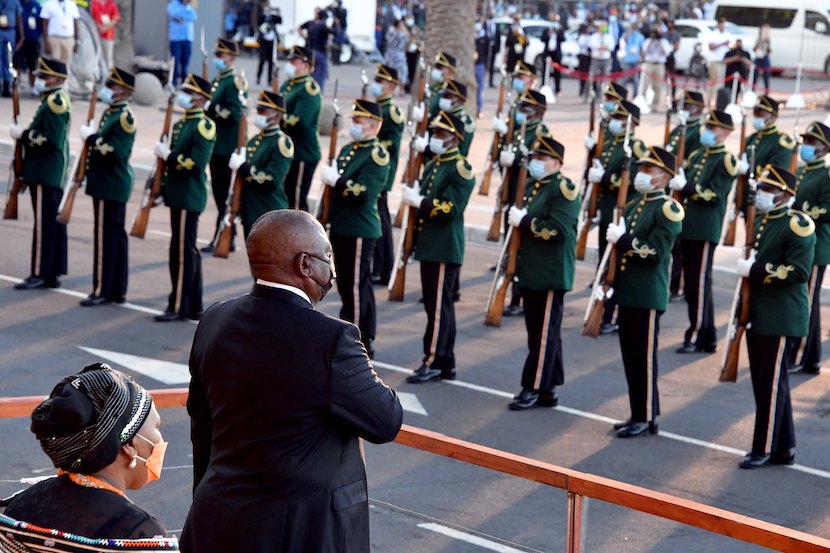 Somebody needs to call the ruling party on their much-touted ‘developmental state’, and Ivo Vegter does that handsomely, accusing President Cyril Ramaphosa of “lying through his teeth” and outright hypocrisy. Socialism and capitalism don’t mix, however much we want to believe Ramaphosa’s SONA rhetoric. Taxing capital away from the private sector in order to spend it on ‘creating jobs’ through schemes like the Expanded Public Works Programme, makes the private sector less dynamic, less agile, and less able to create employment. Paying your state labour less than the stipulated minimum wage because you’re exempt is selective regulation. It’s as simple as the 11 months it took for Ivo’s local Roads Department to pave the five kilometres of dirt road to his hometown when it could be done over a weekend using machinery. The joke of issuing more workers with spoons instead of picks and spades to create more jobs, says it all. – Chris Bateman

Ivo Vegter in the Daily Friend.

On one hand, President Cyril Ramaphosa said government does not create jobs; business does. Days later, he waxes lyrical about the developmental state. He says he wants both. He can’t have both.

Ramaphosa – who is, of course, only a loyal cadre of the ANC pursuing a National Democratic Revolution sketched out 60 years ago – is two-faced when it comes to economic ideology.

Ergo, he lies through his teeth. The ANC calls it a ‘mixed economy’. The problem is that oil and water – socialism and capitalism – don’t mix. Once you are a prosperous country, you can afford to invest in welfare systems and free public services, but that isn’t socialism. That isn’t a mixed economy.

This dichotomy explains the blatant contradictions in the president’s State of the Nation Address (SONA), which I pointed out over the weekend.

On Thursday evening, he said: “We all know that government does not create jobs. Business creates jobs … The key task of government is to create the conditions that will enable the private sector – both big and small – to emerge, to grow, to access new markets, to create new products, and to hire more employees.”

Later that same night, he bragged about the hundreds of thousands of low-wage, low-skill jobs the government created, most of which the economy does not need.

By Monday morning, when he sent off his usual weekly epistle to the press, he made the contradiction explicit: “Some people have suggested that we must make a choice between, on the one hand, a developmental state that plays a vital role in economic and social transformation and, on the other, a vibrant, expanding private sector that drives growth and employment.

“The reality is that we need both. We need a capable developmental state and a dynamic and agile private sector. We need them to work together and complement each other.”

So, he has completely backtracked on his ‘government does not create jobs’ statement. In the SONA, he said: “Fundamental reforms are needed to revive economic growth.” On the other hand, he explained in his newsletter that the idea of needing both a capable developmental state and a dynamic and agile private sector is not new; indeed, it harks back to the policy guidelines expressed in the Ready to Govern paper adopted in 1992.

Which is it, Mr President? Sticking to a 30-year-old policy in which the democratic state has ultimate responsibility for “co-ordinating, planning and guiding the development of the economy towards a sustainable growth pattern”, or fundamental reforms? You can’t have both. As TechCentral editor Duncan McLeod ably explained, they are mutually exclusive.

When you tax capital away from the private sector to spend it on ‘creating jobs’ through make-work schemes such as the Expanded Public Works Programme, you inevitably make the private sector less dynamic, less agile, and less able to create employment.

Conversely, if you stop trying to create jobs using taxpayer revenue, you leave capital in the private sector, which encourages growth, dynamism and job creation. There is no way to over-tax the private sector in support of a developmental state and still expect it to be vibrant, growing, and creating jobs.

The consequences of 30 years of developmental state ideology are plain for everyone to see. The private sector is not growing. Foreign direct investment is flat. Capital outflows are increasing. The brain drain continues. And most importantly, unemployment, even by the narrow definition, has more than doubled from its low of 16.5% in 1995.

SOEs are black holes, into which hundreds of billions have been sunk, and which are responsible for poor logistics, high transport costs, high taxes, catastrophically unreliable electricity, and large-scale corruption. They are a primary reason why the private sector is unable to grow and unable to create jobs.

How to kill growth

In the town where I live, some five kilometres of the only road connecting it to the rest of the world needs to be resurfaced. In a developed country, this would be done over a weekend, with minimal disruption. But this is South Africa. Here, it is scheduled to take 11 months.

Almost a year of stop-go traffic control that literally brings the entire town to a standstill. All because we have to employ an army of people using flags, spades, rakes and brooms, rather than doing it quickly and cheaply using machines.

Imagine the cost in time lost in traffic, lost business in town, increased transport times and higher fuel costs, all to keep a few dozen poorly paid workers employed for months. The costs are massive, while the benefits are slim. This is how you kill growth.

As Leon Louw, founder and president of the Free Market Foundation, has been wont to say, if labour-intensive public works worked, why not issue workers with teaspoons to do the digging? That way, you could employ even more people, for even longer, creating even more employment! The reason, of course, is simple: employment that is not productive does not contribute to economic prosperity, which is needed to grow employment numbers.

One law for thee, another for me

As if to trumpet its hypocrisy, the government has excused itself from having to comply with national minimum wage legislation. The national minimum wage, as of a week ago, is R23.19 per hour worked. However, because it couldn’t otherwise afford to pay the hundreds of thousands of people it employs in make-work schemes, government pays workers a mere R12.75 an hour. So much for being a workers’ party.

All its arguments for why a minimum wage is necessary thus go out the window. Government cruelly prohibits unemployed people from taking private-sector jobs that pay less than the minimum wage. Perhaps government considers being unemployed to be more noble than being able to contribute a little to the household expenses.

Yet, for government it is somehow perfectly ethical to have thousands of labourers working all day on road gangs in the hot sun, for a mere 55% of the national minimum wage. Government keeps claiming that raising the minimum wage does not reduce employment, but that is only because employment is already at a minimum. Lowering it would enable companies to employ more people, as its own employment programmes clearly demonstrate.

For a brief few seconds, when Ramaphosa said, “We all know that government does not create jobs. Business creates jobs,” he was right.

When he said, “The key task of government is to create the conditions that will enable the private sector – both big and small – to emerge, to grow, to access new markets, to create new products, and to hire more employees,” he was right.

Doing so would have required reducing the tax burden, slashing the regulatory bureaucracy, privatising SOEs, easing or ending BEE and other preferential business policies, and liberalising labour market regulations. That would have been ‘fundamental reform’.

Instead, Ramaphosa blinked, reverting to a 30-year-old government developmental state policy that has produced no development, and has been a catastrophic failure for the people of South Africa.

The ANC is ideologically incapable of reform. Even when its chief salesman mouths the right words, all he really proposes is to double down on the failed policies that brought South Africa to the brink in the first place.