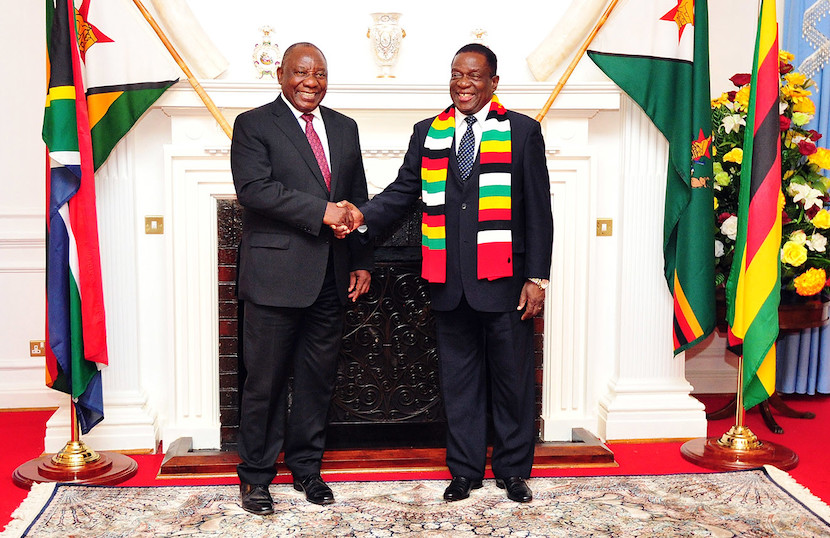 So often, as with many analysts, the real guts of an argument lies in the last line, as is fitting for academics reaching solid conclusions. But for the reader it might help, (spoiler alert), if we cut to Wits Sociologist Roger Southall’s conclusion at the outset. This compelling analysis adds juicy meat to the uncomfortable dinner table discussions drawing parallels between South Africa’s revolutionary rulers and Zimbabwe’s. Uncomfortable because they are frighteningly similar; we’re just at an earlier stage on the same trajectory. Here’s his punchy assertion and conclusion; The liberation movements have fulfilled their historic task. Compelling them to leave the political stage is a daunting but necessary agenda. How it came to this Southall outlines in almost unassailable detail. Whether it will be possible, and the chances of a turnaround make this an intriguing ‘must read’ article. This story was first published in The Conversation. – Chris Bateman

South Africa is in a state of drift: the danger is that the ANC turns the way of Zimbabwe’s ZANU-PF

The South Africa media is thoroughly consumed with the political crisis within the ANC: the rampant factionalism, the massive corruption, the ‘capture’ of the state by the practice of ‘cadre deployment’, and the resulting decline in the party’s poll ratings.

There are genuine fears (or hopes) that the party will lose its electoral majority at the next general election in 2024.

From this follows the most fundamental question of all: if the ANC lost its majority at the next election, as Zanu-PF did in the parliamentary and presidential elections of 2008, would it democratically concede power?

Or, alternatively, would it thwart the popular will by systematically undermining any post-election coalition government, as Zanu-PF did when it entered a coalition with the opposition Movement for Democratic Change (MDC) in 2009? It refused to give up presidential power, and clung on to all the key levers of state power. It subsequently rigged the 2013 general election.

What prompts such thinking is the apparent dilemma confronted by President Cyril Ramaphosa, who is also the ANC president. He positioned himself as the candidate who would reform the ANC. He also pledged to clean up the mess of corruption left behind by the Zuma presidency, and set South Africa back on the path of growth.

But for all the talk, Ramaphosa has made little progress. He appears to be totally paralysed by an inability to resolve the battle between factions within the ANC. He apparently lacks the authority to control his Cabinet. And the will to do so.

So long as this continues, the country remains in a state of drift. The level of unemployment is shocking, the extent of poverty among the black population is appalling, and the prospects for meaningful and appropriate economic growth are minimal. No wonder so many fear that South Africa is embarked upon a Zimbabwean-style decline into a basket-case economy run by a liberation movement autocracy.

Highlighting three key features of liberation movement rule – such as that by Zanu-PF and the ANC – help us to understand the present crisis in South Africa.

First, liberation movements are characterised by simultaneous democratic and authoritarian impulses. Their claim to having liberated their countries from colonial oppression has much merit. This is true if they are reluctant to share this with other forces which participated in the struggle for freedom.

Furthermore, their present claim to be representative of ‘the people’  ensures that they cannot completely ignore the needs of their supporters.

On the other hand, they have a long history of authoritarianism.

Although they tolerated internal dissent during the freedom struggle, they also quelled it at times with brutal violence. After the arrival of democracy, they have systematically suppressed rivals or allies with a legitimate claim to having contributed to the struggle for liberation.

The Zimbabwe African People’s Union, led by Zimbabwean liberation struggle hero Joshua Nkomo, was bruised and beaten until it agreed to merge itself into Zanu-PF in 1987.

The United Democratic Front, the effective internal wing of the ANC during the latter years of apartheid, dissolved itself following heavy pressure to do so by the ANC in 1991.

Both Zanu-PF and the ANC tolerate opposition parties. But they systematically seek to delegitimise them by characterising them as ‘counter-revolutionary or agents of foreign powers.

Second, the liberation movements have become the vehicles for rapid class-formation. Although they won political power, they inherited only limited economic power, as the commanding heights of their economies remain in private hands.

Initially, their principal focus was on removing old-guard public servants, whose loyalty to a democratic government could not be assumed, and replacing them with party loyalists who could be trusted.

This resulted in the merging of party and state, weakening the independence of bodies of accountability established under their respective constitutions.

And, justified on the basis of pursuing the revolution, efforts were made in both countries to ‘capture’ the commanding heights of the economy. This was achieved fully in Zimbabwe, but only partially in South Africa. The process was easily perverted into lining the pockets of an increasingly predatory party-state bourgeoisie. This, as Zanu-PF’s and the ANC’s control of the public service, including the parastatals, enabled them to allocate high paid jobs, tenders and procurement contracts to cronies.

Third, there is a constant tension between liberation movements’ commitment to the liberal constitutionalism by which they acceded to power and their aspirations to monopoly domination of society.

The liberation movements regard themselves as the historic embodiments of the aspirations of ‘the people’. Their logic is that those who are not for them are against them. Constitutional restraints on the exercise of power by the state are weakened or ignored. Above all, other political parties or organs of civil society which make claims to represent the popular will are dismissed as counter-revolutionary. The popular will cannot be shared.

These dynamics explain why Ramaphosa’s reform agenda has fallen foul of a political paralysis gripping the ANC and the wider arena of politics in South Africa.

The ANC retains its determination to rule yet lacks the capacity to do so effectively. The only way out of the dilemma is its defeat in an election.

However, as the 2008 Zimbabwean example has shown, defeat of a liberation movement in an election does not guarantee its removal from power, so long as it retains the support of the military, police and security services.

Perhaps South Africa could prove different. The military has been run down, and the police and the security services are themselves heavily factionalised. However, this assumes that there is an opposition party or coalition capable of displacing the ANC electorally. And that this would be backed up by a level of popular and civil society support which would be ready and willing to combat any attempt to steal an election.

The liberation movements have fulfilled their historic task. Compelling them to leave the political stage is a daunting but necessary agenda.

There are five pillars of a successful country, assuming competent economic policies, all of which are in place in South Africa.

If one of these falls there will be a domino effect and the country will become like Zimbabwe.

First thing Mugabe did when he lost the vote in 2 000 was to fire the judges. This did away with rule of law. He then encouraged violent land grabs, with impunity. He gagged the press and hijacked the Reserve Bank, with devastating consequences for the economy. He murdered opposition members, rigged elections and eliminated democracy. One unscrupulous, murderous dictator can destroy a country. I think that South Africa is far too robust to go that way. There are also no signs of an iron fisted dictator emerging. That would be a warning sign.

South Africa has other challenges, but turning into a Zimbabwe is not one of them.