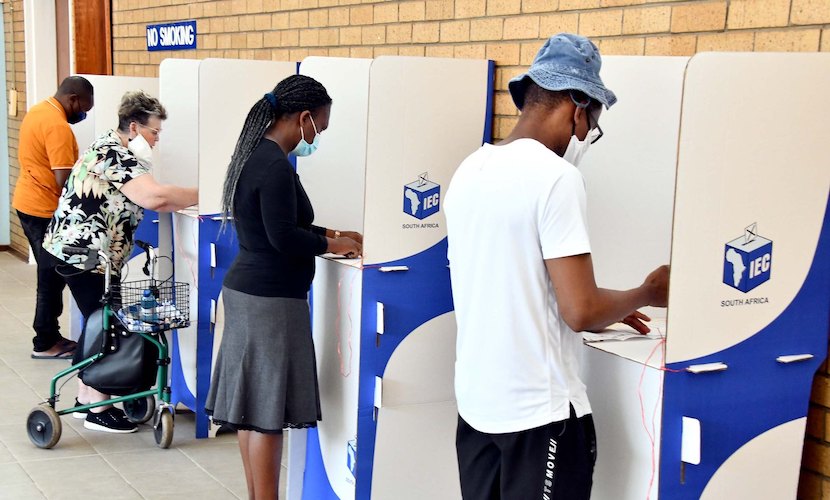 The One South Africa (OSA) Movement believes there is no way President Cyril Ramaphosa can sign the Electoral Amendment Bill into law in its current form. Dr Michael Louis, director of OSA, as well as founder of the Independent Candidates Association, told BizNews correspondent Michael Appel that there’s ardent opposition to the recently-passed Bill, with stinging criticism even coming from none other than former presidents Thabo Mbeki and Kgalema Motlanthe. In June 2020, the Constitutional Court ruled that our Electoral Act was unconstitutional. The Bill of Rights – which gives any individual the right to stand for public office – is at odds with current legislation stating anyone contesting elections must belong to a political party. The ConCourt ordered Parliament to remedy the situation within 24 months, but that deadline expired in June 2022. An extension until 10 December this year was granted. Louis predicts that due to the flawed and defective process by which the Bill in its current form was crafted, it simply won’t pass constitutional muster. Ramaphosa is likely, he believes, going to have to approach the ConCourt with yet another condonation application in order to make changes to the Bill so that it equals out the skewed playing field currently working in favour of political parties. – Michael Appel

It’s a fact. Parliament really has such problems because when it comes to process, there was the private member’s motion and bill of honourable [Mosiuoa] Lekota that was submitted to Parliament in 2019 already because we always knew that the right to vote is really a great problem. So we spent two years draughting that Bill. That was done to help the minister when it comes to a new electoral system that might involve constituencies and that bill was submitted. It was certified by the constitutional lawyers of Parliament and the minister just absolutely ignored that Bill. So when the judgment [of the Constitutional Court] came on the 11th of June 2020, there was already a formal Bill in Parliament and they could have just immediately started working on it. But it took him [Ramaphosa] one year to appoint a ministerial advisory committee chaired by Valli Moosa and then it took him another six months to consider that Bill and get opinions. So we’ve got the fact that it’s negligence on the part of Parliament. Even in the current ConCourt extension application [to 10 December], the court actually said that Parliament was at fault and the minister was at fault and reprimanded them for delaying this Bill.

On whether the Bill is defective in its current form

The defects are definitely in the public participation process. The public wasn’t given enough time to consult. Even although the minister sent the standing committee to go to different provinces at different times, they actually split the standing committees into groupings. It was false because the they weren’t presented with the options of the ministerial advisory committee. There were two options, the minimalist option and the majority report. Even at the two meetings of the standing committee that I attended I asked if I can see Valli Moosa’s report and I was told no. One [member of the committee] didn’t even know that there was this advisory report so the different options weren’t presented to the audience to comment on. That was not in line with public participation. They just came with the one Bill. Then, the ANC bussed in people to give their submissions. What was funny about it is that they read from a script. I even went to one of the ladies and I asked whether she can please explain what option one [that she was supporting] was all about. She said “Nee meneer, ek weet nie wat hierdie option one is nie, maar ek moes dit so lees”.

On bringing a fresh application to the ConCourt challenging process

The problem with going to court on remedying process is that – and we know there are huge flaws in it and we support OUTA 100% on [potentially challenging] it – is what must the court then rule? Go back and restart the process again? We know we don’t have time restart this process. So even though process is flawed, I think for us to go and base a constitutional application challenging process might not be the remedy that we’re going to go for or need at this time. We know that 2024 elections are down the road.

The problem that you’ve got, if it’s engineered [to relegate the introduction of independents] to 2029, we will already give notice to government that you can spend your R1bn or R500m on the elections, and the IEC can work day and night to try and get the lists through, but one day after the elections we will declare it unconstitutional. This is my 28th year in the political landscape, and I’ve never ever experienced the pronouncement by two past presidents of the ANC [on a matter like this]. Just this weekend former President Thabo Mbeki said something that I don’t think I’ll ever hear in my life again. He was in an NEC meeting where he knows that the NEC were talking about how could they design an electoral system that will tilt the figures in favour of the governing party. Now that’s what we’ve always been saying. This is the problem constitutionally with this Bill, that it has been designed with intent to work in favour of the bigger parties. When Thabo Mbeki confirmed that it was just so outstanding. What was even better is when he said he can’t believe the current leaders of the ANC would [stifle the process] instead of seeing how they can enhance democracy and have a more participatory democracy that would bring more people to the polls.

The NCOP has just announced that public comment must come in before the 9th of November. Then it’ll take about two weeks to consider those submissions from not only civil society, but all stakeholders, which will take us to about the 23rd of November. And we expect the debates to be in the NCOP around about the 27th or 28th of November. The deadline is the 10th of December. Now, with such a controversial bill, with Valli Moosa, as the ministerial advisory chairperson, opposing this Bill saying it won’t pass constitutional muster, plus two ex-presidents going against him on this issue, we don’t foresee the president being able to get constitutional legal advice within an ambit of eight days and sign this bill into an act. So we are predicting that the president is going to ask parliament to ask for a condonation of extra time because he believes that this Bill could be unconstitutional and he needs legal advice. This will then leave the gap open for us to try and see if we can come with some form of resolve.