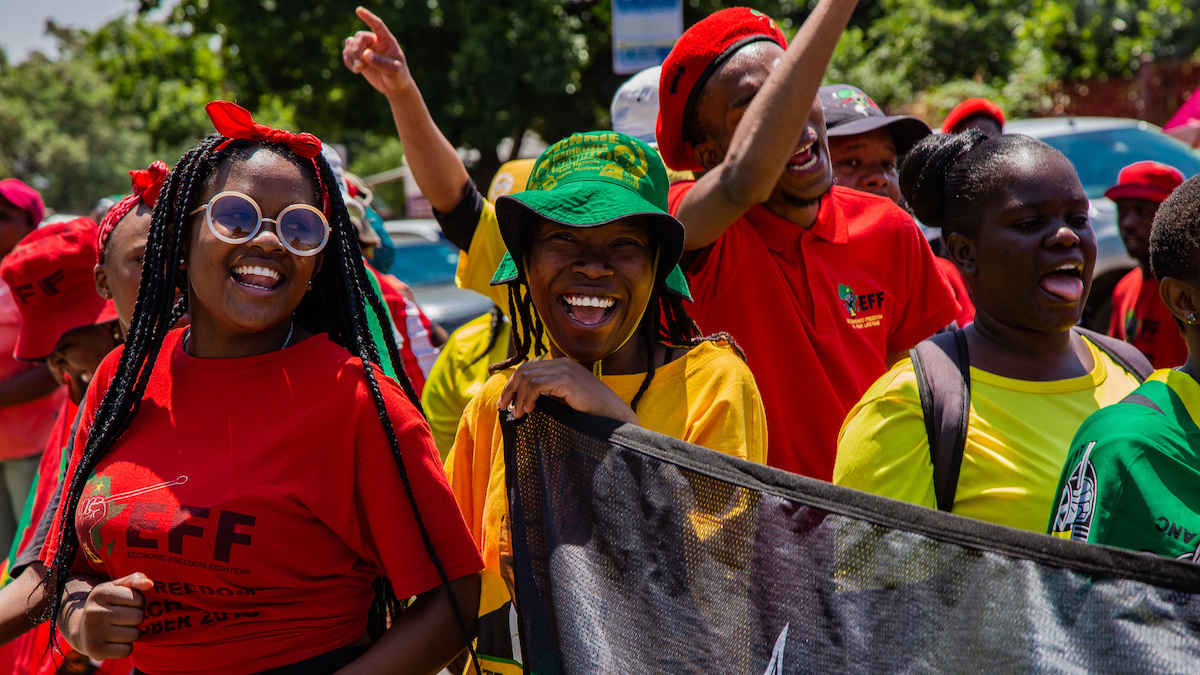 The EFF and ANC in Ekurhuleni recently failed to strike a bargain, which saw the DA retain the mayoral chain with Nicholas Lorimer resolute that it is all about patronage. Many political pundits believe the ANC and the red berets are natural bedfellows. The one’s ideology is closely followed by the others’ slightly more radical ideal of its ideological utopia. But why then couldn’t these two parties – with a lot to gain so close to a national election in 2024 – find common ground? Lorimer posits in the piece below first published on Daily Friend that it’s all about access to patronage networks. By splitting power, between an EFF mayor and ANC speaker, with a jumble of MMCs, for example, you’d potentially be disrupting or splitting access to patronage networks no one wants to share. “The ANC and the EFF both benefit and suffer from their dependence on patronage,” writes Lorimer. – Michael Appel

Can an EFF/ANC coalition actually work?

Increasingly, by-election results and the polling we’ve seen so far suggest that it is very likely that, in the absence of some dramatic shift in political momentum, the ANC will fall below 50% in 2024.

Much of the analysis by the IRR and the Daily Friend has focused on an alternative government, consisting of the affectionately named ‘Wild Dogs’, a motley coalition of the various opposition parties, including the DA, ActionSA, the IFP, and so on.

However, lurking in the shadows is what I like to call the coalition of evil. Together, the ANC and EFF are likely to secure at least 50% of the seats in parliament – unless the ANC does extremely badly and drops well below 40% of the vote, and the EFF stays put around 10%.

Throughout its existence the EFF has played the role of an opposition party, winning many supporters in its fierce opposition to Jacob Zuma during the second half of his presidency. As careful observers will note, however, this is little more than a façade. The reality is that the EFF and ANC remain in close ideological alignment on the direction of policy, with the only differences between the two being on how aggressively to enable the destruction of property rights, the squeezing of capital and the centralisation of power.

In many ways, the EFF has continued to operate essentially as the ANC youth league, from outside the party, regularly intervening in or commenting on the ANC’s internal political battles, and advancing the ideological arguments underpinning ANC policy, while being beyond the disciplinary reach of the ANC’s leadership.

It may have seemed inevitable, then, that should the ANC lose its majority in parliament, the prodigal child that is the EFF would return to the loving embrace of the ANC to form a new even more radical government which would finally complete the ANC’s National Democratic Revolution.

Such a coalition would, of course, be disastrous for the country, snuffing out the hopes of millions of South Africans who have only just escaped poverty or still aspire to escape from it.

The future very rarely makes provision for such neat stories.

While the eyes of many commentators are focused on the dynamics of the anti-ANC coalition, in the city of Ekurhuleni we seem to be getting our first look at an alternative … or the lack thereof.

On 2 November, the Ekurhuleni council met to vote in a new mayor, after the ANC ejected DA mayor Tania Campbell through a vote of no confidence that had succeeded with the help of the EFF a week earlier. Rumours swirled that the Gauteng ANC, led by Panyaza Lesufi, and the EFF had been in fierce negotiation behind the scenes and had agreed that the ANC would back the EFF in electing an EFF mayor and speaker in Ekurhuleni in return for EFF support for an ANC mayor in Johannesburg.

The EFF had also apparently offered an alternative deal where the EFF would hold the mayorship in Ekurhuleni but give the speaker position and many of the Members of the Mayoral Committee (MMCs) positions to the ANC.

Apparently, the Gauteng ANC was enthusiastic about these deals. However, the regional ANC in the Ekurhuleni region rejected the deal and refused to cooperate. ANC councillor and former Ekurhuleni mayor Mzwandile Masina emerged as the leader of this rebellion, and his faction told the media that they would not ‘be held to ransom’ by the EFF, which won only 31 of the 224 seats in the council. Clearly, they did not wish to relinquish the mayorship, regardless of what the party ordered.

Moment of the vote

Negotiations continued between the two parties until the moment of the vote, when the ANC and EFF both put forward candidates for the mayorship. Seeing that no agreement had been reached, the two parties asked for a postponement of the council sitting until 8 November, Tuesday this week.

When the next vote for mayor was held on Tuesday, the EFF surprised many observers by voting for DA candidate Tania Campbell, whom they had just voted out of office two weeks earlier. Evidently the ANC and EFF negotiations were unsuccessful.

If the ANC/EFF alliance is so obviously in the interests of both parties politically and ideologically, why did this attempt at coalition fail?

The ANC and the EFF both benefit and suffer from their dependence on patronage.

Access to patronage is the glue that can soothe many internal battles and win over the fanatical support of many who depend on political patronage for their livelihood.

This means that power must be retained at all costs, robbing you of your strategic flexibility. Put simply, the local ANC region can’t give up the mayorship to the competing EFF patronage network, because to do so would collapse its own network of patronage. The Gauteng ANC is not necessarily going to replace the lost jobs and tenders that would result from handing the mayorship to the EFF. The Ekurhuleni ANC needs these resources to survive, hence their refusal to cooperate with the EFF.

A deal may eventually be forced on the local ANC via a threat to remove them from their council seats, or the EFF may agree to take a back seat and accept the speaker’s role rather than go for the mayorship. Regardless of what happens from here, what we’ve seen in this failure are the seeds of what might be the death of any potential ANC/EFF alliance in 2024.

The ANC has held itself together at the national level through the massive use of patronage at all levels of society, from expanded public works jobs given out to ANC branch members at the lowest level, to huge tenders given out to senior allies.

If the ANC were to have to give up ministerial posts to the EFF in 2024, this might not just collapse these networks but allow the EFF to usurp them. Some ANC members, instead of making a deal with the dangerous EFF, might rather allow the wild dogs to take power in the hope that they would be too weak and divided to destroy their party’s patronage networks.

It’s still far too early to say what we can expect from the next election, but I think the Ekurhuleni example shows that many possibilities are still on the table, and that 2024 will hold many surprises, for good and ill, for us all.