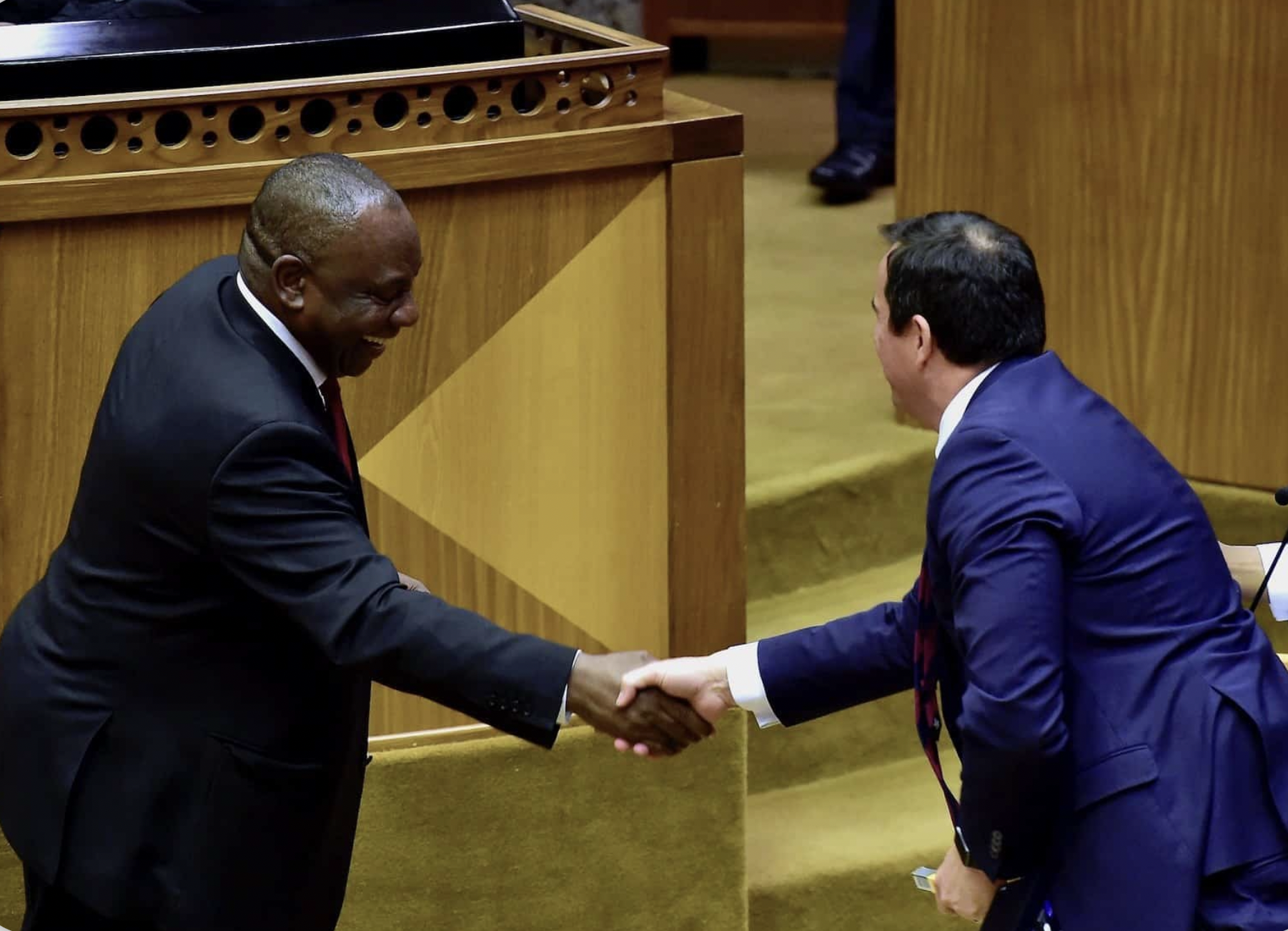 DA Gauteng leader Solly Msimanga has raised whether his party should potentially consider taking an official position on the question of an ANC/DA coalition in 2024. Whether that carefully considered position would then only be in reference to a provincial context (ie: Gauteng) or guide relations nationally, would have to be decided on by the party’s Federal Council and Federal Congress. Msimanga made the comments while speaking on a panel discussion hosted by News24. He said: “The last [internal] survey that we did, the majority of the people were saying you can engage with the ANC but there should be conditions in terms of good governance, in terms of cleaning out corruption, in terms of making sure we end the issue of cadre deployment.” Should the party’s internal decision-making structures then decide this is direction the DA must be open to come 2024, an “engagement document” must be drafted to guide discussions. To be clear, this isn’t Msimanga’s view. This was polling feedback to the DA from its supporters. While ActionSA’s national chairperson Michael Beaumont describes this as a “shock revelation” in the statement below, it’s still very premature to say this in any way, shape or form means that a vote for the DA in 2024 equals a vote for a coalition with the ANC. Firstly, the DA has made no such decision. Its supporters have said they may be open to it. Secondly, the ANC would have to be open to the idea of working with the official opposition, which has hounded it for over two decades. Who in their right mind would work with their greatest rival if they could avoid it? It all comes down to the numbers. If the ANC gets in the low 40 percentile – which polling suggests it might – then it either needs to partner with one relatively substantial opposition party (either DA or EFF), or a host of tiny parties in the hope of getting over the 50% mark. This is where it gets tricky. If you’re going to be forced to share power, RW Johnson makes the point that you’d want to share it with the party that gets you over the threshold without having to give away more than is necessary. Johnson calls it the “minimum winning coalition”. In other words, if the ANC needs 9%, for example, to get a majority, it doesn’t make sense to partner with a party that has 20% as they’d have to give away an extra 11% in terms of cabinet positions or concessions. That’s where the possibility of the ANC partnering with the EFF comes in. Johnson also says it would be a “major ideological problem for the ANC” to partner with the DA, so Ramaphosa would likely be nervous going down that road as it could spell the end for their vaunted National Democratic Revolution. – Michael Appel

In a live broadcast panel discussion hosted by News24, DA Gauteng Provincial Leader, Solly Msimanga, made the shock revelation that the DA has polled its supporters and concluded that their supporters want the DA to go into coalition with the ANC.

This arises after numerous utterances in the recent past by both John Steenhuisen and Helen Zille in which they present coalition with the ANC as a viable option for the 2024 national and provincial elections. Msimanga’s admission that polling will come before the DA’s Federal Council and Federal Congress to make a final decision about the ANC, reveals that there is a serious move for the DA to align with the ANC ahead of the 2024 elections.

There can be no further doubt that the DA is planning to provide the ANC with the majority it will lack in 2024, as some misguided notion of generating reforms from within. No credible polling of DA supporters would generate a view to coalesce with the ANC, this is clearly a leadership-level decision that is now being rationalised.

It should also be noted that the DA has taken this position while in multi-party coalitions with ActionSA, VF Plus, IFP, ACDP and other parties. These coalitions are established with the premise of building a coalition bloc ahead of the 2024 national and provincial elections. ActionSA, and perhaps other coalition partners, are going to need clarity from the DA about coalitions when they appear to be planning to prop up failed ANC governments nationally and provincially in less than two years’ time.

ActionSA wishes to place on record, without any ambiguity, that we will not enter coalitions with the ANC. We do not believe it is possible to fight corruption, end load shedding, fix our criminal justice system, grow our economy, create jobs or professionalise the civil service in coalition with a party that has created these crises in South Africa. There is no good ANC, or bad ANC. The revelations from the State Capture commission, and the lack of a plan to end load shedding – which has plagued South Africa for 14 years – makes it clear that South Africa cannot prosper while the ANC is in government. ActionSA will only work with other political parties committed to providing an alternative to the decline and deterioration of our country.

As we approach the 2024 national and provincial elections, and South Africans are seeing the opportunity to remove the ANC nationally and in various provinces, it requires political parties to unite behind a collective project to unseat the ANC and fix South Africa. Parties that do not share this objective should be clear with the South African people about where they stand on the ANC.

No South African should entrust their vote to a party in 2024, either nationally or provincially, unless they know whether that party intends to use that vote to prop up the ANC and giving them a majority that voters are increasingly denying them due to failed governance.