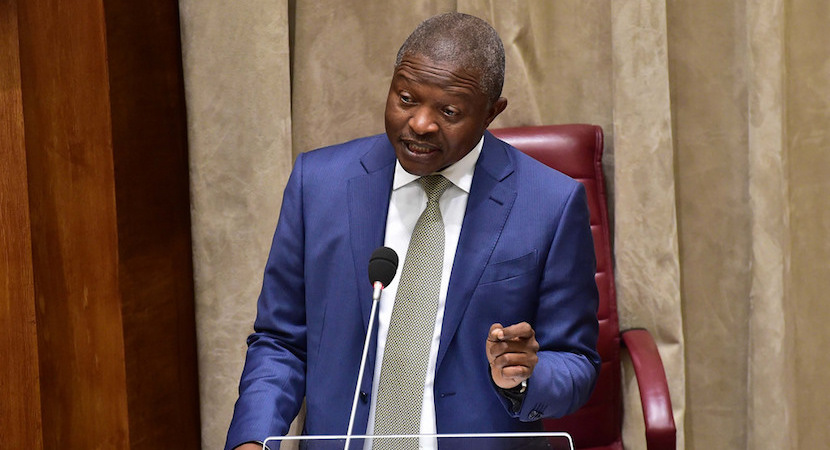 OUTA wants South Africa’s second in command, David Mabuza, to face a host of charges related to organised crime perpetrated in Mpumalanga dating back almost two decades. Mabuza is known as “the Cat” for his propensity to bounce back from anything – including a bout of poisoning – which saw him flee to Mother Russia in 2015 for treatment. He’s a slick character. The word teflon springs to mind. He’s been mired in scandal since the early days of our democracy when he was fired as Mpumalanga’s education MEC. According to a 2007 Sowetan article: “Mabuza, an influential member of the ANC in the province, was fired by [former Mpumalanga Premier Mathews] Phosa when the SABC’s Special Assignment exposed his involvement in the 1998 matric results bribery scandal.” He’s definitely a complex character whose shenanigans – including being branded the mastermind behind several political killings (while no charge has ever stuck) – is unpacked extensively in Rehana Rossouw’s book Predator Politics. OUTA has collated several criminal complaints related to his tenure as both MEC for Agriculture and Land Administration, as well as Premier of Mpumalanga. OUTA sets out below that the case revolves around the claims of corruption which conservationist and whistleblower Fred Daniel has raised over several years. Worryingly, “six police case dockets have gone missing in this matter, pointing to a high level cover-up of evidence of corruption.” – Michael Appel

The Organisation Undoing Tax Abuse (OUTA) has referred a criminal complaint against Deputy President David Mabuza and others on 5 December 2022 to the Investigating Directorate (ID) of the National Prosecuting Authority (NPA), calling for charges of organised crime to be brought against him.

This is a direct referral to the ID, in terms of section 27 of the National Prosecuting Authority Act.

The referral names 13 individuals including Mabuza and two businesses as suspects, asking that they be charged under the umbrella offence of contravening section 2(1) of the Prevention of Organised Crime Act (POCA), which refers to racketeering activities, in that they acquired or maintained, directly or indirectly, interest in or control of the following criminal enterprises: a land restitution scam, involving obtaining beneficial control of vast tracts of land (sometimes fraudulently) and selling the land at inflated prices to the land claims commission; and a Problem Animal Fund enterprise, which generated income by killing wildlife and aiding and abetting the land restitution scam.

Penalties for convictions on offences in POCA’s section 2(1) are fines of up to R1 billion or imprisonment up to life imprisonment.

Offences committed in furtherance of the criminal enterprise are believed to include: defeating the ends of justice; theft; fraud; perjury; contempt of court; intimidation; extortion; and conspiracy, incitement or attempt to commit offences listed in POCA.

OUTA’s complaint is outlined in an affidavit by OUTA CEO Wayne Duvenage.

“OUTA’s interest in this complaint is the damage done to the South African and Mpumalanga economy because of corrupt interests in land restitution and the wildlife sector in Badplaas in Mpumalanga,” says Duvenage in the affidavit.

In 2015, retired judge William Heath described the loss to the local economy in Badplaas as follows: “These actions have destabilised the local rural economy, causing loss of investment confidence and damages which has been calculated to more than R35 billion in lost investment and revenue, lost foreign exchange and taxes to the government and the loss of more than 6 000 local jobs. This is devastating in an area with an unemployment rate of 75%.”

The case revolves around the claims of corruption which conservationist and whistleblower Fred Daniel has raised over several years and, although much has been written and exposed about this matter, law enforcement has failed to take effective action.

The evidence in OUTA’s referral come from court records in Daniel’s civil action against the Mpumalanga Tourism and Parks Agency and others in the Pretoria High Court, over the loss of his 39 000 hectare nature reserve. Mabuza is not cited as a defendant in this litigation but his shadow looms over this case, which was filed in 2010 and finally went to trial in August 2021. Court documents include a 2005 investigation report by Ernst & Young. Much of this matter has been covered extensively in the Daily Maverick.

Six police case dockets have gone missing in this matter, pointing to a high level cover-up of evidence of corruption.

In 1999, Daniel founded a multi-billion rand conservation and eco-tourism project, the Cradle of Life Project, which aimed to create socio-economic opportunities for impoverished rural communities and repair and protect biodiversity. This project became the target of corrupt interests in land restitution and the wildlife sector.

The land restitution scam involved buying up farms and acting as middlemen masquerading as farm owners, selling the farms at vastly inflated profits to the Mpumalanga Regional Land Claims Commission (MRLCC), which in turn claimed the costs from the national Department of Land Affairs, supposedly for communities of thousands of land “claimants”, despite the fact that no legal claims were registered for those farms. Labour tenancy claims were fraudulently presented as restitution claims for entire farms and the claimants were not verified. There were also many more “claimants” than the population of the area, and it appears that no land claimants have benefited from these claims.

According to Ernst & Young, the total payments in respect of land purchases in Badplaas by the MRLCC amounted to R206 275 524 during the period of review which was between 1 April 2003 to 31 August 2004. This was in spite of the very limited nature of land claims in the area.

In 2008 Mabuza, at the time an Mpumalanga MEC, set up the Greater Badplaas Land Claim Committee, which we believe was used to intimidate Daniel as part of a land grab. Local police were assaulted. Daniel’s business partner was also assaulted, allegedly while Mabuza watched.

The Problem Animal Fund enterprise exploited the province’s biodiversity by monetising the killing of so-called “problem animals”. This was done by selling hunting permits to the highest bidder. This involved repurposing the Wildlife Protection Services (WPS) of the Mpumalanga Tourism and Parks Agency, resulting in animals having to be protected against those who were supposed to protect them.
The Fund ran a bank account outside the controls of the Public Finance Management Act (PFMA) with no oversight. WPS employees decided which animals were problem animals, issued hunting permits to the highest bidder and paid the proceeds into the Fund. “This conflict of interest and lack of oversight by the PMFA kept the criminal enterprise alive… They saw biodiversity as a cookie jar,” says Duvenage.

“The only explanation that exists for the above conduct of the organs of state and their former employees is that they had been repurposed to serve and protect corrupt interests in the land claims, wildlife and agricultural sectors. The proverbial smoking gun is the removal of evidence from the dockets and the squashing of altogether six criminal cases pertaining to the criminal enterprises,” says Duvenage.

“What runs like a bitter thread through Daniel’s experience are the attempts to defeat the ends of justice and smear his reputation as a conservationist. The government defendants in the North Gauteng Division of the High Court in Case No. 34502/2010, represented by the State Attorney and prominent senior counsel have for nearly a decade and a half, defeated and continue to defeat the ends of justice to cover up the crimes. The failure of law enforcement, perjury, defeating the ends of justice and the ongoing funding of the civil litigation by government are to blame for the longevity of the criminal enterprises.”