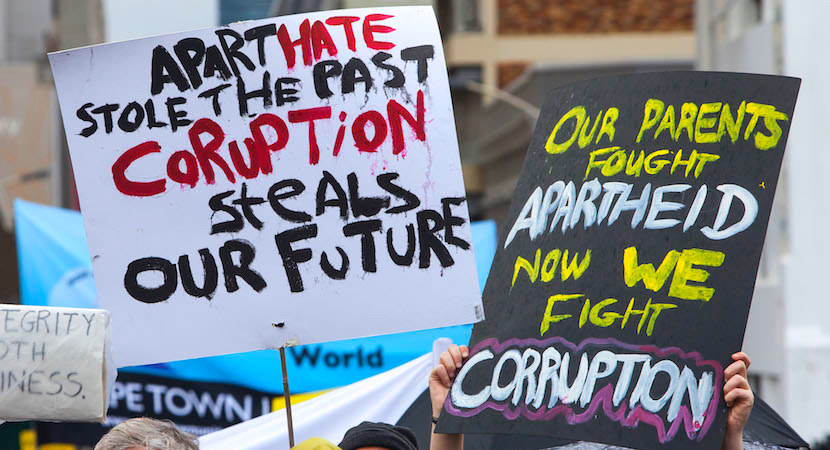 CAPE TOWN — Rhodes University Professor Emeritus, Pierre Faure, picks up on a vastly under-ventilated suggestion addressing the crippling State and corporate corruption; offer conditional amnesty to speed up the daunting mop-up operation. It’s a critically important, pragmatic idea, given how South Africa will otherwise remain bowed by the economically-crippling albatross of global mistrust. Perhaps it’s time we got off our punitive moral high horses and grabbed the Truth and Reconciliation Commission ring. You have to ask; would those breath-taking TRC revelations and boil-lancing testimonies have emerged had some of the apartheid miscreants not taken up the amnesty offer? I was involved in experiencing an almost forgotten township murder story I wrote turning out to be something far more sinister than I’d ever imagined – the Gugulethu Seven killings by police in March 1986 was a Vlakplaas security police operation. We’d probably have remained deeply suspicious but none the wiser had the TRC crew not exposed the whole truth. The hearing drew out the entire Western Cape police command, with some key security policemen pleading for amnesty and spilling the beans. Yes, it was in response to some superb TRC investigative work using new empowering legislation, but it worked. Faure’s amnesty conditions, listed below, are a vital caveat. – Chris Bateman

In Fin24 of 7 November 2017, Liesl Peyper asked: “Could a wholesale amnesty for individuals and companies involved in corruption help South Africa combat this scourge that has become entrenched in almost all sectors of society?

It is a substantial question and should be granted more journalistic oxygen to influence government to adopt such a measure.

Why? Because the depth and width of corruption was/is so chronic that it will take a few decades bring perpetrators to book, and at enormous cost to South Africans in financial, social, emotional (mainly continuing despair) and economic terms.

The latter costs are manifested in many ways, including in the form of the most important factor of production in economic growth, human capital (and specifically entrepreneurs, of all hues) leaving the country in ever-increasing numbers.

Highly educated and skilled entrepreneurs, and other committed workers, are welcomed with open arms by countries with declining populations.

These are mainly English-speaking countries, where South Africans settle down easily and quickly become productive citizens.

It is axiomatic that a high level of growth (as achieved under President Mbeki and Finance Minister Manuel) is critical to solving the many problems we face.

South Africa urgently needs to expose the perpetrators, and move on to the critically-important economic matters.

A corruption amnesty perhaps has a parallel in the Truth and Reconciliation Commission, which recognised the need to heal and put the past behind us so we could progress with the very challenging task of building a democratic South Africa.

A wholesale amnesty must come with conditions:

The cancer of corruption must be excised now.

Without them we would be in far more serious socio-economic trouble.

South Africans anxiously await the day when iniquitous corruption is a problem past, and journalists turn their attention to matters economic.

The entrepreneurial South Africans we all know do not wish to leave our beautiful country, but are increasingly doing so now because they are in fearful for their and their children’s economic futures.