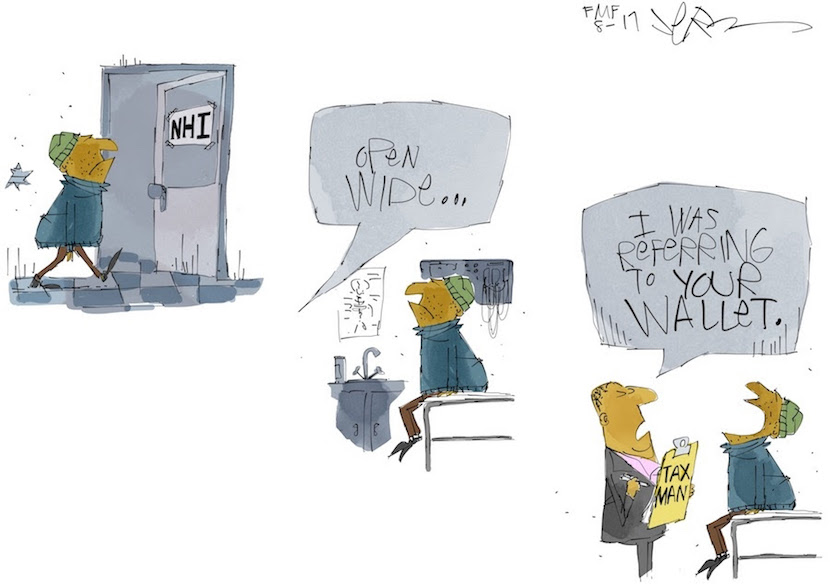 Last week, BizNews published an article examining the proposed National Health Insurance (NHI) and, in particular, the purported virtues Dr Nicholas Crisp, Deputy Director-General of the South African Department of Health, believes NHI presents. One of Crisp’s arguments in favour of NHI is that South Africa’s private sector is to blame for much of the country’s wasted healthcare spend. Crisp advocates for a centralised healthcare system, saying: “Fair pricing, removing unnecessary administration and procurement costs and appropriate servicing made the NHI both ‘necessary and affordable’.” Considering the South African government’s track record with public service monopolies (think Eskom, Transnet), the idea that this same government is capable of executing an effective centralised healthcare system is, at best, highly unlikely and, at worst, laughable and simultaneously frightening. BizNews received the following responses to Crisp’s proposed NHI. – Nadya Swart

Comments by Deputy Director-General of the Department of Health (DoH), Dr Nicholas Crisp, at the recent 2021 Forbes Africa ‘Future of Health Summit’ continue to echo the government’s socialist mantra on its policy approach to healthcare.

This zero-sum tactic comes in the form of government’s contentious National Health Insurance (NHI) proposal, which Crisp seemingly lauds as a panacea, a silver bullet that will cure all the country’s healthcare woes.

As we have repeatedly highlighted in our public commentary, including a research paper we published on NHI in May this year, the NHI is a destructive policy heavily steeped in discredited socialist ideology and strongly reliant on untested and unproven claims of substantial advantages over our current health system that will somehow automatically emerge once NHI is implemented. The dearth of critical technical and feasibility analysis in the NHI policy process, now nearing 13 years old, is not only reckless – given the vast and sweeping changes it proposes to both the private and public health sectors – but it is the clearest indication of the overriding desire of socialist government control over ever-greater portions of the economy.

Total expenditure on healthcare in SA is 8.5% of GDP as Crisp states, but he continues to make the spurious claim that, because approximately half of this is private expenditure by private citizens on themselves, this is the root of public sector woes. This is a claim that has manifestly permeated the NHI policy process. Not only is it patently false – as it conflates expenditure of private monies with tax-funded public expenditure – government purposefully requires this claim as a deflecting mechanism by which to evade accountability over public sector failures. Government’s policy position is an intentional diversionary blame game, a zero-sum policy argument that the private sector must be destroyed if the government is to repair a now increasingly dysfunctional public health system.

As is common, the bottom-line truth is far simpler than politicians would have us believe. The public sector’s health expenditure has grown substantially over the past two decades. Measured in real and per capita terms, the 2021 public health budget is double what it was in 2000. In our research paper, we undertook a review of public health expenditure among two dozen developing economies with per capita GDPs that were higher than that of SA. By comparison, SA’s per capita public health spend lay within the second highest quartile of these 24 wealthier countries, indicating that the SA government spends more on public healthcare than most of its richer peers. Yet, when we undertook a comparative analysis of the public health outcomes within the same countries, SA ranks almost at the bottom.

Crisp also trots out the moribund policy argument that because the NHI Fund will be a monopoly, akin to one giant medical scheme for the country, it will be cheaper and simpler to administer, and it can use its bulk purchasing power to reduce costs. Belief that a monopoly will be a more efficient purchaser and more cost-effective than a competitive free market system again amply illustrates the socialist underpinnings of this proposal. The current public health system is also a monopoly. Public sector patients have no alternatives and there are no competing forces within public sector provision of healthcare. If anyone requires evidence of how healthcare monopolies perform, they need look no further than our existing public health sector. Quality is poor, outcomes lag behind our peers, shortages and wastage are commonplace, corruption is rife, and the medical malpractice liability now exceeds R120bn, equal to about half the national public health budget.

In a nutshell, what the NHI is proposing is to nationalise the private sector and integrate it into the public sector. On this basis, government believes it will fix its healthcare system because it will have more money available via new NHI taxes. Yet, as we noted above, the public sector expenditure has doubled when measured in real and per capita terms over the past two decades. If the government’s only obstacle to achieving a world-class healthcare system was money, why is the current public health system not a sterling example of what it claims it is capable of achieving?

Government would have us believe – without any clarifying analysis or supporting research – that if taxpayers pay additional taxes to finance NHI, and the government nationalises the private sector, magically, there will be world-class healthcare available for every citizen in the land. Crisp rejects the notion that NHI is unaffordable, yet, the NHI green paper and both white papers outlined various funding options to raise an additional 3% of GDP in NHI taxes, a staggering R165bn which, when added to the current public health budget and other smaller funding sources, provides the NHI Fund with a budget exceeding R450bn annually in current values.

The overarching problem with this NHI proposal is its poor governance framework. The NHI Bill bestows far-reaching and autocratic powers upon the Minister of Health, who will have singular control over all senior appointments within the NHI; the members of the various NHI sub-committees that will control accreditation of providers; what levels of reimbursement they will receive; and the centralised procurement of products and services amounting to hundreds of billions of rands annually.

Crisp’s assertion that “unprecedented safeguards” have been put in place against corruption simply holds no muster when read against the extensive authoritarian powers that the NHI Bill will confer on the Minister of Health.

It was with interest that I read the piece: ‘Dr Nicholas Crisp: Wasteful healthcare expenditure can be traced back to the private sector’ on 18 November.

Proponents of National Health Insurance (NHI) frequently state that South Africa spends R500bn annually on healthcare; about half on nine million private-sector patients and the other half on the remaining 51 million state patients.

South Africa does not spend R500bn on healthcare. The South African government allocates R250bn of taxpayer money to public healthcare, and individual South Africans spend a further R250bn of their own discretionary money to protect their health. The inconvenient truth is that most of the tax comes from just 6.3 million active taxpayers, of whom only about a quarter contribute 80% of the personal tax. These are the same people who buy private health insurance. VAT on private healthcare adds a further R37bn to the state coffers.

The situation is even more complex. There are many partially insured people who buy only limited cover as well as uninsured people who pay for private healthcare from their pockets. These people cannot afford to lose time off work waiting in queues at public sector hospitals and clinics. We don’t know the real extent of this third group, but a quarter of households surveyed in the 2019 STATS SA Household survey reported that they had used private healthcare during the past month.

I do not propose that the private healthcare system is effective and not open to abuse by patients, practitioners, insurers and their brokers. There is much to be improved but I doubt that NHI can achieve it.

Poverty and the quadruple burden of diseases is not our problem. They are merely symptoms of the real problems of poor education, unemployment and endemic corruption. If the government wants to improve public health, it should first invest in education so that more people can become entrepreneurs and employed, and establish a large tax-paying middle class.