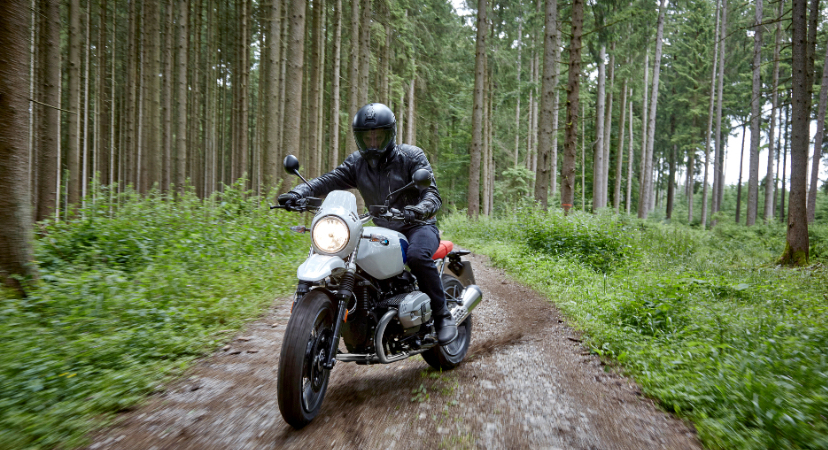 The BMW R nineT forms part of the automotive company’s heritage range of motorcycles. The name pays homage to models from the 1970s and ’80s, one of which was named the R90. You see what they did there cues? The similarities don’t stop at a mere name though, there’s carry over in design and configuration too.

This GS edition gets its name from the German terms Gelände/Straße (off-road/road). The GS models can be distinguished from the rest of the range by their longer travel suspension and more upright riding position. While the scrambler and cafe racer of the range appeal to the city slickers, the more brightly coloured fairings, retro headlight surround and overall stance definitely point to an on/off rider.

But while it’s a bit more rugged in nature the GS maintains the quality standards set by the R nineT range. There’s not a cable tie in sight, which might seem like an odd thing to note, but most motorcycles have wiring tied up in ugly nests along the frame. Not on the R nineT. Everything down to the cross drilled Brembo brake discs is a work of engineering art.

Like its predecessors the R nineT is fitted with a two cylinder air cooled boxer motor, something that gives a lot of BMW motorcycles their unique appearance as the cylinders jut out from the bike’s torso just in front of the riders shins. In this application the motor is 1200cc with 6 cogs in the ‘box, spitting out 81kW and 119 torques onto the road. Carrying just 220kg wet the R nineT has plenty of punch. Put simply it’s a peach. Punchy from low down in the rev range, that boxer setup’s torque makes the bike a pleasure to ride in traffic or on the open road. The exhaust note takes a different beat to the scrambler, suiting the bikes nature well with a more traditional off-roader bark.

For my relatively short frame (at around 1.73m) I found this GS sits even taller than its scrambler cousin. It was darn nearly an issue. But the seating position is comfortable, quite upright with an agreeable bend at the knee to hit the foot pegs that sit in line with the seat. The seat could do with a touch more padding, for those longer rides.

The R nineT Urban GS really is an amazing machine. Of course it all comes at a price, being somewhere north of R200,000 once you’re done with the options list but it justifies that by really standing out with that 80s GS design philosophy that’s blended with the wonders of modern manufacturing and attention to detail that few will match.