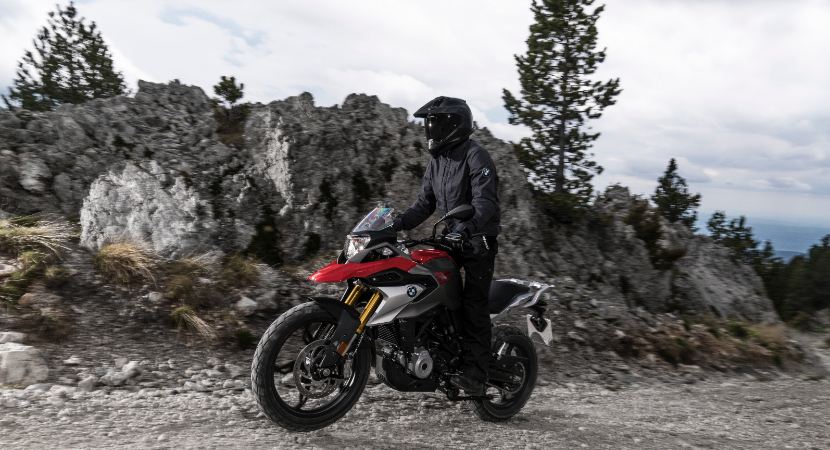 South Africa has seen something of a push from local bike importers in offering entry level models to get people on motorcycles and into their respective brands. Harley Davidson does a ‘Street’ range, KTM offers a small Duke, Kawasaki has a 300, Honda carries a 250 adventure bike and BMW recently introduced the G310 series, in R and GS guise.

The bikes have been developed in conjunction with TVS Motor Company, an Indian manufacturer who sells some 3 million bikes a year. This kind of collaboration is the norm for entry level models, with Harley and KTM both partnering with Indian firms for their respective models.

Both the G310 R and GS offer up a 313cc liquid cooled single cylinder motor with 25kW and 28 torques. At a wet weight of just 160kg and 170kg respectively the bikes are actually quite sprightly, but need a good rev, up near 11,000rpm to really break stride. It’s the right blend of excitement and some speed for a new rider to enjoy, but not get carried away with. The only criticism really is that the bikes don’t sound terribly inspiring, especially at idle.

On the safety front there’s ABS which is a great addition for newer riders especially. It makes a big difference having confidence when you throw out the anchors and more so when the road surface is wet.

Fuel consumption is a meagre 3-4 litres per 100km depending on your wrist action. This info isn’t displayed on the black and white LED instrument cluster, but everything else you might need is. Visibility of the cluster itself is good too, even in bright sunlight.

The R is the street bike of the range, taking on what’s called a ‘naked’ appearance. It marks the first modern sub 500cc motorcycle by BMW and accordingly starts the company’s assault on the lower end of the market.

The fact that the bike is quite light also bodes well for newer riders and especially useful while navigating rush hour traffic, making the G310 R a great commuter. The bike is relatively short, even comfortable for my shortish 1.74m frame and the engine is placed low and toward the front, making for a low centre of gravity which gives a nimble feel to the ride. Get her up to highway speed and things are still relatively stable too.

The GS badge will be very familiar to anyone in the biker scene. The name comes from the German terms Gelände/Straße (off-road/road), accordingly GS models can be distinguished from the rest of the range by their longer travel suspension and more upright riding position, which is more suitable to the trials experienced on dirt.

This baby GS follows the styling cues of its bigger siblings, displaying BMWs typical adventure bike fairings and colour scheme. It sits somewhat taller than the 310R as one would expect, 5cm to be exact. That put it just on the limit of being comfortable for me, but fortunately both bikes are available with three different seat height options to try cater for all shapes and sizes.

The only puzzling aspects of the GS for me are that you can’t spec a more off-road oriented tyre, which to an extent limits the bikes true ability as an on/off. Further to that point, I feel the motor should have been tuned for more torque lower down in the rev range to assist in low speed maneuvers that are common on dirt.

For those looking to get onto a bike, or anyone looking for something a bit smaller for the daily commute (and perhaps the odd weekend adventure) you can’t go wrong with this pair of BMWs. Quality wise, despite being built in India, they largely subscribe to the norms you’d expect from the brand (the GS can rattle a bit) and come with all the usual warranties and support. That said, neither particularly stand out against the aforementioned competition, so it really comes down to brand preference at this end of the market.