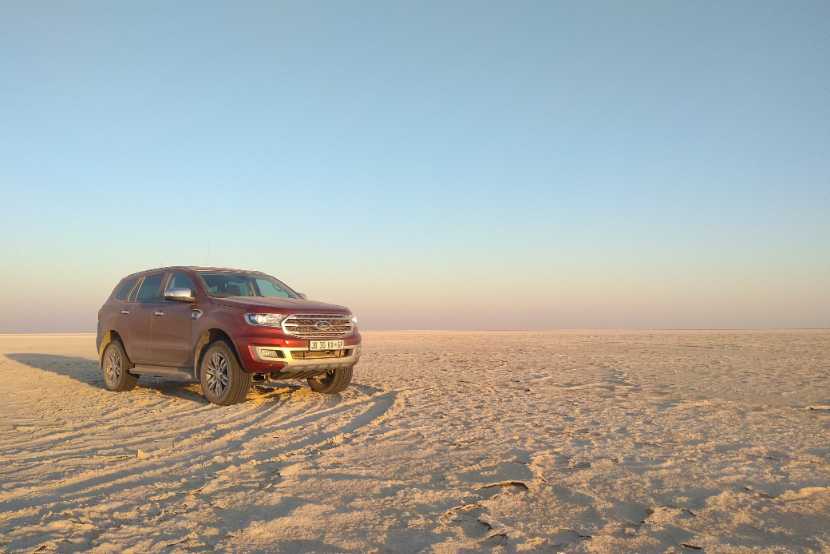 Family holidays. Normally associated with a long haul drive, something in tow be it a caravan or a trailer, laughing and fighting between the kids and padkos. Or at least that’s how our family holidayed when I was growing up. The one thing that was missing was a big SUV fit for purpose. Something like Ford’s Everest, for example. It boasts 7 seats, 3.5 ton towing capacity, a remarkable 4×4 system and a frugal diesel motor.

This last week Ford introduced a revised model line up of the Everest and how better to showcase it than to have us privileged motoring media travel and camp across the northern region of Botswana to test its mettle.

On landing on a dirt airstrip just outside of Khwai we hopped aboard an Everest to head to camp through the village reserve, spotting various of the local wildlife species along the way. With thick sand and the odd river crossing, the Everest’s 4×4 terrain response system, boasting 5 modes for different surfaces, and 800mm wade depth came in very handy.

After an early morning to watch the sun rise with a warm cup off the fire we set off for the Makgadikgadi salt pans near Gweta. The Everest now had kilometres of sandy gravel highway to devour until we hit Maun, where we’d be treated to a bit of tarmac before a short track to the pans.

Under the skin the rear suspension has been altered to allow a revised anti roll bar, which in turn allowed for better damper and spring rate tuning to improve overall comfort. Those outcomes are noticeable on the roads we encountered throughout Botswana where the Everest never felt harsh or un-composed. Nor did it feel like getting stuck over any of the more tricky terrain.

Powering the revised line up is a new powertrain. Two new motors are available, being a single turbo or a bi-turbo 2.0 litre diesel unit, both mated to a new 10 speed automatic gearbox. Although the old 2.2 and 3.2 diesel units are still available, this new motor provides better efficiency and technology while maintaining the Everest’s usability (for towing etc). After 3 days of driving in such varied conditions the 9.4 litres per 100km we used is pretty impressive in my books.

Arriving at the pan just before sunset reminded me of Africa’s immense beauty, not to mention sleeping under a starry sky right there on the salty surface. Should it have been a little cold for that, sleeping in the back of the Everest Limited would have been a good option considering its immense panoramic sunroof which would have provided the perfect opening to allow in the night sky’s wonderful vista.

A sunroof isn’t all that’s on offer, though, as some new technology features have been added to the line up as well. The top of the range ‘Limited’ Everest gets radar guided cruise control, anti-collision warning and braking systems, lane keeping aid, lane departure warning, blind spot warning with cross-traffic alert and so the list goes on.

Pricing on the new line up starts at R584,000, going to R687,000 for the 4×4 XLT and ending at R761,000 for the Limited. Pound for pound the best value car in the segment and actually very compelling versus things like a Land Rover Discovery Sport, the Discovery itself and even something like a Toyota Prado.

The Everest is a truly wonderful car. Comfortable, spacious, practical, feature-packed and exceedingly capable in pretty much any situation. Go on, take that family holiday. And if you can do it in an Everest, all the better.