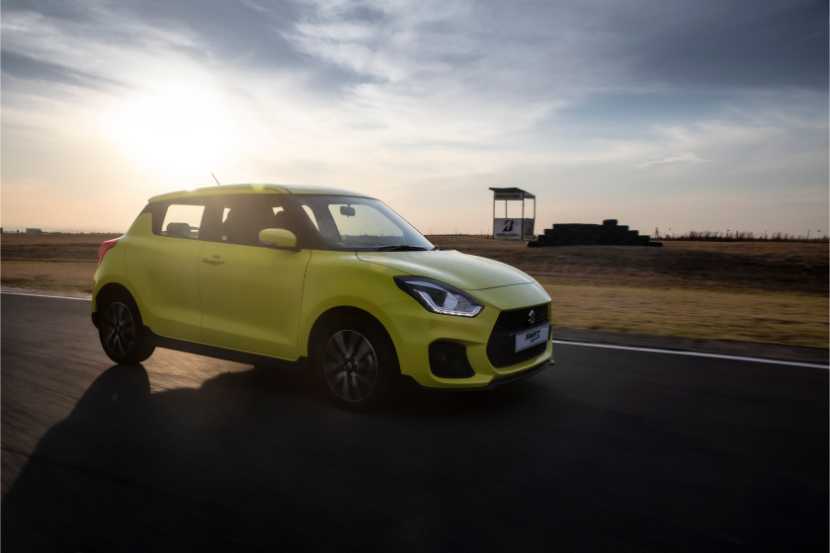 Suzuki’s Swift Sport isn’t the most well known hot hatchback around, but it sure has oodles of cult status among car people. Reason being is that it was one of the last hot hatches that stood true to what a hot hatch should be; namely usable fun. It was also the last of the non-turbo charged hot hatches.

Now there’s a new one, and guess what, it has a turbo charger. Whether that has potentially ruined its cult status is yet to be seen, but what it has done is thrown the cat amongst the pigeons.

The late Colin Chapman was famed for saying that adding power makes you faster on the straights, but subtracting weight makes you faster everywhere. That’s thanks to a little thing called power to weight. It’s a statistic that no car manufacturer bothers to publish, probably because these days cars are getting heavier more than anything. Not so for the Swift Sport. It has shed 90kg over its predecessor, now weighing in at under a ton. Put that together with its new 1.4 litre turbo charged motor, which produces 103kW and 230 torques, and you have a little rocket ship.

Let’s put that into perspective quickly. Based on the above numbers the Swift Sport boasts 106kW/ton and 237Nm/ton. A VW Polo GTI, the best selling of the smaller hot hatches, with it’s 2.0 litre turbo charged motor only manages 108kW and 236Nm per ton. It gets even more interesting when you throw price into the mix – the Suzuki coming in at R315,900 while the Polo costs a whopping R398,400 (before you start ticking the options list).

Read also: All new Ford Fiesta: begging the question, ‘why buy a Polo?’

The question now of course is whether the Swift Sport is any good. The answer is a relatively simple, “Yes” but let me delve into the details a little.

By replacing the previous generation’s segmented frame with a continuous-frame chassis and adding more welding spots than the standard Swift, the Swift Sport boasts an incredibly rigid chassis. Then the engineers added lightness, attacking the doors, body construction, alloy wheels, engine, seats and interior fittings in that pursuit. Importantly this was done without compromising on safety.

On the suspension front there are thicker anti-roll bars, an integrated single-unit solution for the wheel hub and bearings and increased spring and damper rates on the front axle. At the rear, greater toe and camber rigidity and a completely unique trailing arm design, for better tracking between the front and rear wheels. Overall track is wider too.

All of that culminates into a fairly well balanced, if tending toward understeer, car that’s fun to chuck around. We did plenty of that out at Red Star Raceway at the local launch, having some time on track and on the skid pan with a tight gymkhana course. The boost in power to weight really does make the little Swift Sport into something of a giant killer, especially as the torque is delivered from quite low down in the rev range, making it feel rather punchy out of corners. Personal preference says I’d like the car to rotate a little more on the rear axle to assist getting the nose to turn, but very few cars are built that way these days.

The gymkhana course set up on a dry skid pan highlighted the Swift Sport’s nimble and lightweight characteristics well. Again that torque delivery made getting out of tight twisty sections a breeze but also showed what a good set of anchors they’ve fitted.

On the inside the Swift Sport boasts nice supportive bucket-style seats, aluminium pedals, a new 7” touch screen with Android Auto, Apple CarPlay, a reverse camera, Bluetooth and USB connectivity, steering mounted controls and cruise control. It might not quite have the premium finish.

Despite fears that turbo charging the new Suzuki Swift Sport might ruin some of the factors that made the outgoing model a cult hero, I can safely say it hasn’t. In fact it’s turned the car into a serious contender for the big boys of the segment while retaining the very ethos of what a Swift Sport should be.