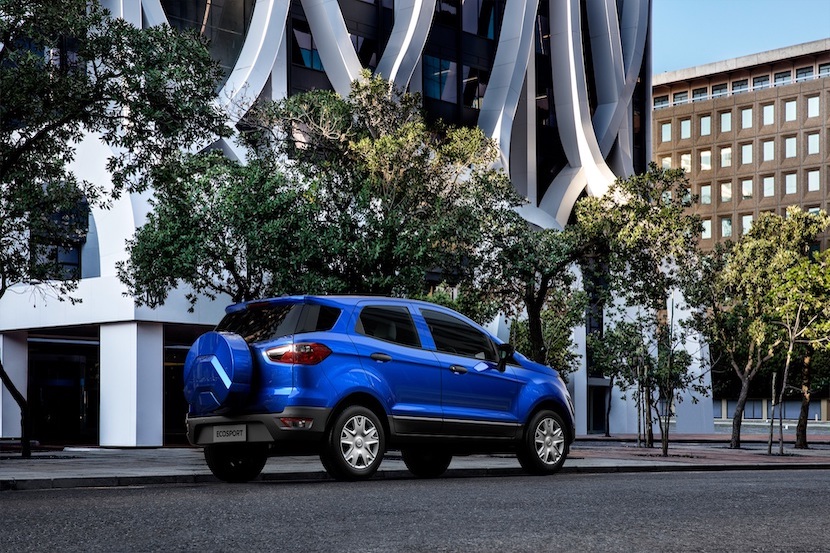 Ford’s EcoSport has been around for quite some time, before any mainstream manufacturer decided to enter the compact SUV/crossover segment that now enjoys such great popularity. Now, nearly every non-premium brand offers an entrant in the R250K-R400k crossover market. Toyota and Suzuki have their Urban Cruiser/Vitara Brezza twins, VW its classy T-Cross and Hyundai it’s stylish Venue.

There are many more, but in all this time, the EcoSport has remained relative and popular. A refresher in a base-model Ambiente reminded me of just how accomplished Ford’s offering is.

As always, styling is subjective. Personally, I’ve never got along with the EcoSport’s styling, but then again, I could be wrong. After all, the EcoSport has continued to enjoy great success with consumers, who continue to buy them at a fair lick.

The Ambiente model is devoid of the trim and details found on posher models. Instead of alloy wheels, you’ll find 16-inch steel wheels fitted with hubcaps. They’re attractive enough, but I think a set of alloy wheels is more suited to a car costing over R300 000.

Another divisive styling element is the tailgate-mounted spare wheel. This may free up space in the boot, but it looks strange and means the boot has to open outwards and to the left. This can become a hindrance when parked in a smaller garage or in a packed parking lot.

The boot itself is impressively spacious. The square shape means packing things in is effortless, with some added space to be found under the boot floor itself. It measures 333 litres, enlarged to 705 litres with the rear seats folded down.

Like other small Ford products (Figo, Fiesta) the EcoSport is a very engaging drive. The base model Ambiente is fitted with a 1.5-litre, three-cylinder petrol engine that also does duty in the Figo line-up. 91 kW and 150 Nm of torque push the EcoSport along decently. Three-cylinder engines are inherently vibration prone, but the refinement in the EcoSport is commendable. At lower revs it’s barely audible, only making itself known as you push the car.

On the motorway and in town, it performs admirably. It does tend to struggle when climbing steep inclines, however. Thankfully, this can be mitigated by stirring the five-speed manual gearbox. Speaking of the transmission, it is nicely slick and a joy to use. Unless you really need the automatic, I’d recommend you save the money and stick to swopping cogs yourself.

Through the corners, the high-riding EcoSport obviously cannot hold a candle to its Fiesta and Figo siblings, but for a crossover, it feels dynamic. The steering is crisp and direct, something missing in many small crossovers and SUVs. The ride is comfortable most of the time, but does become unsettled by consecutive road irregularities.

Personally, I wouldn’t stretch to the 1.0-litre turbopetrol – although the appeal of more toys may be too strong for some. There is, however, an appeal in the turbodiesel Ambiente. For just R11,000 more, you get an incredibly frugal engine that is capable of averaging under 4.0 litres/100 km with care.

Inside the EcoSport Ambiente, you’ll find a number of standard features, despite this being the range-starter. The cloth-trimmed seats are well-bolstered and very comfortable, with the driver’s seat boasting height adjustment. Hard-touch plastics are the order of the day, and while not sumptuous, does at least feel well-screwed together. This isn’t exclusive to the EcoSport, however. Rivals from Renault, VW and Hyundai all lack this nice-to-have interior feature.

The Ambiente trim-level boasts manual air-conditioning, all-round electric windows, a trip computer and rear parking sensors. The audio system (which boasts impressive sound quality) has to make do without Apple CarPlay/Android Auto, but has Bluetooth capability and space for two USB slots – which are illuminated at night, making them easy to find. Steering wheel controls are a nice touch, but at over R300 000, a leather-trimmed steering wheel would add that premium touch.

What cannot be faulted is the amount of standard airbags. Ford offers six, even on this base model. ABS, Brake Assist and Stability Control keep you safely on the road. A storage tray under the passenger seat, deep door bins and centre console storage make up for the rather paltry glovebox.

Okay, what will it cost me?

At R303 400, the base model EcoSport is on par with rivals from other brands. It’s impressively equipped – especially from a safety perspective – and offers an engaging driving experience. Ford claims the EcoSport sips just 6.4 litres/100 km of fuel. In my time with the crossover, I managed just 7.5 litres. While not an unquenchable thirst, I’d opt for the turbodiesel derivative if I had to commute in stop/start traffic.

A four-year/60 000 km service plan is standard, with Ford offering a four-year/120 000 km warranty plan. In terms of value for money, the base model Ambiente is the one to pip for. That is, of course, unless you need an automatic derivative. I’d stretch to the turbodiesel if possible, for stellar fuel consumption.

Despite the fact that the EcoSport is nearly 10 years old (kept fresh by a facelift), it’s rather extraordinary that it remains so competitive in a segment bustling with activity. Still, that’s not to say there aren’t signs of ageing – the audio system and dated interior design are two of very few signs. However, it’s certainly worth considering if you want an element of dynamism infused in your crossover.