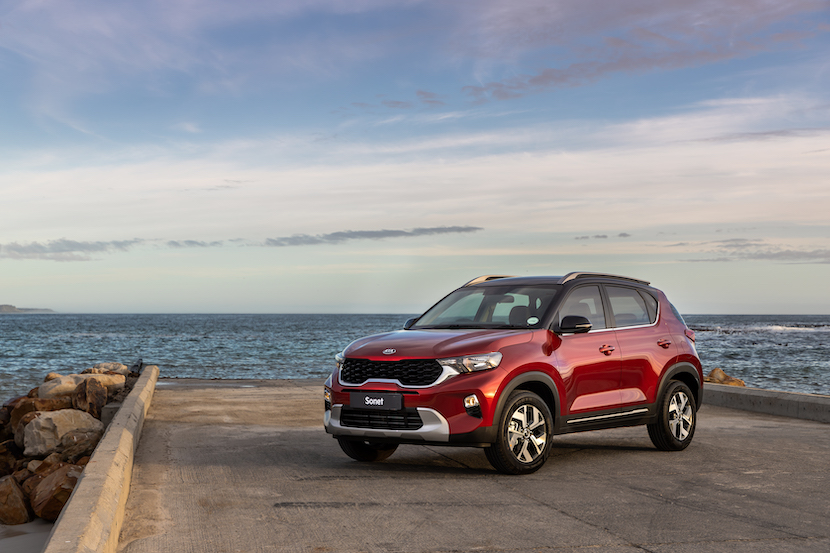 With myriad offerings all competing for the attention of crossover-crazed consumers, another runner has entered the race in the form of the Kia Sonet. But does the classy Korean stand a chance in a segment bustling with talented opposition? The short answer is yes – especially if Kia’s track record with family SUVs are anything to go by. They may be the outgoing models, but the current-generation Sorento and Sportage are both eminently capable contenders in their respective segments, both melding luxury with value-for-money.

Slotting in just below the Sportage is the handsome Seltos. Despite being on sale for less than two years, the distinctive SUV has become a staple on SA roads, finding favour with plenty of buyers. Still, a fast-growing segment – the compact crossover – is taking the motoring landscape by storm, with products like the Suzuki Vitara Brezza and Honda WR-V appealing to those whose budget can’t quite reach the R400k or so needed for a Seltos or similar. That’s where the Sonet fits in.

Starting at R264 995, the Sonet is competitively priced. There are four derivatives on offer – two trim choices (LX or EX), both of which are available as either a six-speed manual or CVT automatic. Our test unit, an EX-grade Sonet fitted with a CVT ‘box, retails for R305 995. Plumping for the posher EX model nets you (amongst other things) front fog lamps, rear park distance control and a leather-wrapped gear lever and steering wheel. EX models also gain 16-inch alloy wheels and stylish roof rails.

Speaking of aesthetic enhancements, it’s worth noting that style plays a big factor in the purchasing decision of most crossovers. The Sonet – which comes across as a baby Sportage – doesn’t disappoint. Up front, the tiger-nose grille works nicely with the faux bash plate, giving the little Kia decent road presence. At the rear, a fashionable light bar is to be found, with the sculpted boot lid flowing neatly into the chunky rear bumper.

Open the hefty door and you’re met with a reassuringly solid interior. While hard plastics are abundant, there’s no faulting the fit and finish of the cabin – especially when compared to similarly priced rivals. Standard electric windows and mirrors aside, the inclusion of a comprehensive eight-inch touchscreen infotainment system (with Apple CarPlay/Android Auto functionality) and beautifully-trimmed cloth seats further add to the upmarket ambiance. Elsewhere in the cabin, you’ll find air-conditioning, automatic headlamps and a reverse camera.

From behind the wheel, it’s easy to dial in your preferred driving position. Height adjustable, the driver’s seat is both supportive and comfortable – even on longer journeys. While adjustable for rake, the steering wheel unfortunately doesn’t offer reach adjustment. Space in the rear is adequate, although taller adults may struggle for legroom. What you can’t complain about is the remarkable boot space – 392 litres of luggage space is on offer, besting some rivals by a sizeable 70 litres. Safety wise, the Sonet is fitted with two airbags, ABS with EBD, stability control and ISOFIX child seat anchorages.

Under the chiselled bonnet is a 1.5-litre, four-cylinder petrol engine that sends power to the front wheels. With 85 kW and 144 Nm on tap, the Sonet offers slightly more power than most similarly priced rivals. It may not sound like much, but the naturally aspirated unit is a keen performer, devoid of the lethargy that plagues smaller engined cars equipped with CVT’s.

Kia claims a respectable 0-100 km/h time of 11.8 seconds; adequate acceleration for a car of this ilk. The transmission works well with the four-pot, keeping the revs low while pottering around town. Put your foot down and it does become noisier, with the signature CVT drone permeating the cabin. That being said, this is one of the better CVT’s out there, using steps to emulate a conventional automatic gearbox.

It settles down nicely at motorway speeds, remaining relatively muted at the national speed limit. Along with the aural refinement is the exceptional highway ride. Paired with the hushed engine, the Sonet’s well-chosen ride would deceive you into thinking you’re in a bigger, more expensive SUV. This is a theme that runs throughout the Sonet. From the reassuring thud the doors make when you shut them to the heft that is prevalent in the controls and steering – the Sonet feels refined and well-constructed. Kia claims an average fuel consumption figure of 7.2 L/100 km. It’s worth noting that it’s often very difficult to match manufacturer claims in the real world. Not only did I manage to match it, but beat it. Over my week with the Kia (and 700 km) I managed to average just 6.8 L/100 km.

If you spend enough time on SA roads, you don’t need me to tell you how competent Kia’s Sonet is. Launched just a few months ago, the Sonet has taken a leaf out of the Seltos’ book and attracted consumers in their droves. It’s well-priced, offers everything a driver could reasonably want and does so while being remarkably frugal and refined. What’s more, it’s backed by Kia’s outstanding five-year/200 000 km warranty and four-year/60 000 km service plan. If you’re looking to step into an SUV for the first time – or want to downsize but not necessarily downgrade – the Sonet is very difficult to ignore.