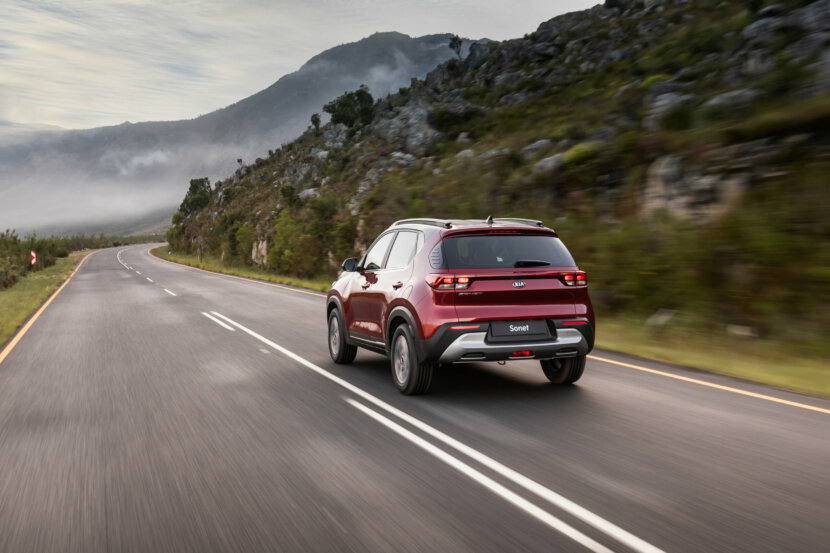 It’s rather unorthodox to begin a road test of a vehicle with the verdict. Anyway, here goes: the Kia Sonet is, quite simply, the best car in its class.

Introduced last year, the Sonet landed in a segment already bristling with competition. The handsome Nissan Magnite, the quirky Renault Kiger and the dynamic Suzuki Vitara Brezza (as well as its twin, the Toyota Urban Cruiser) are all fighting for a slice of the compact crossover pie. Why then does the Kia deserve your hard-earned cash?

On paper, the Korean doesn’t seem to be the best bet. At R305,995, the mid-spec Sonet EX – a higher grade model is expected this year – is more expensive than the range-topping Vitara Brezza GLX (R293,900) and Kiger (R274,900). The top-spec Magnite is priced at R296,995, but ships standard with keyless-entry, push-button start, LED headlamps and a 360-degree reverse camera … luxuries the Kia is lacking.

It seems then, the Kia is left lagging. Yet, facts and figures tell only a small part of the story. Let’s begin with the aesthetics.

The styling will be familiar to most road users, partly down to the Kia family resemblance, but mostly owing to the Sonet’s sheer popularity. Since it was launched last year, the Sonet has taken to the road in droves, consumers enamoured by the sheer value on offer. The brand’s signature tiger-nose grille features a criss-cross pattern, flanked by sculpted halogen headlamps.

Recognisable as a Kia, the Sonet has its own identity and doesn’t look like a shrunken Sportage, for example. At the rear, you’ll find a fashionable light bar. EX models ship standard with 16-inch diamond cut alloy wheels, while LX models make do with 15-inch wheel covers. The test unit, painted in Gravity Gray, looks handsome if a touch discreet; go for Intense Red or one of the two-tone options if you want to stand out.

Although styling is subjective … let’s look at what sets the Sonet apart from its rivals.

Inside, you’ll find an eight-inch touchscreen perched atop the dashboard. Among the infotainment features are various media options – including Apple CarPlay, Android Auto and Bluetooth – vehicle information and a handy reversing camera. Not only is the system intuitive, it also offers clearer graphics than the Magnite and Kiger, and a far more user-friendly interface than the system found in the Suzuki. Sited below the screen are the climate dials and controls. The Sonet may not boast the automatic climate control found in the aforementioned rivals but the system delivers cool air quickly and efficiently.

On the convenience front, the Sonet EX – there is an entry-level LX variant – is generously equipped with nice-to-haves such as rear parking sensors, a leather-trimmed steering wheel and gear lever, automatic headlamps and front fog lamps. ABS with EBD (electronic brake-force distribution), stability control (not available on the Brezza), hill-start assist and Isofix child seat anchorages all form part of the suite of safety features. While dual front airbags are standard, the inclusion of side airbags would complete the package.

The cloth-trimmed seats are attractive and comfortable, too. The cushion provides plenty of thigh support, with ample side bolstering to keep the driver planted. Teamed with the backrest, which offers ample lumbar support, the front pews are a nice place to be, particularly on the long road. There are plenty of adjustments available to the driver; the passenger has to do without height adjustment.

Rear space is on par with rivals. Although, the Sonet has the edge when it comes to headroom. The Magnite and Kiger’s sleek roof lines sacrifice some of the practicality afforded by the Kia’s conservative body shape. It pays dividends when it comes to packing space as the Sonet’s boot measures 392 litres. This compares favourably with its contemporaries; the Magnite measures 336 litres and the Vitara Brezza 328 litres. Folding the rear bench increases cargo room considerably.

The Sonet eschews the traditional instrument binnacle. In its place, a digital speedometer and 3.5-inch TFT display relay trip information. Both are hemmed in by the conventional rev counter, temperature and fuel gauges.

No starter button here, the Kia Sonet EX uses a traditional key to fire up the 1.5-litre engine. Compared to the smaller capacity turbo engines found in the Magnite and Kiger, the Kia’s four-pot feels far more refined and hushed. This civilised approach continues on the road where it is impressively quiet. With 85 kW and 144 Nm of torque, it’s the most powerful despite lagging slightly behind its turbocharged rivals with regard to torque.

The difference is negligible on the road, though. At motorway speeds, the Sonet does a fine job of mimicking larger, more expensive SUVs in terms of ride comfort and refinement. It accelerates well and never seems underpowered or asthmatic. The steering feels far more direct and communicative than the Nissan and Renault, but cannot quite match the Brezza’s crispness.

Through corners, the Sonet remains composed. Again, it isn’t inherently dynamic but it does provide an enjoyable driving experience courtesy of the aforementioned clean steering and surfeit of grip.

It may be a dying breed but swapping the cogs of the six-speed manual gearbox is an absolute joy thanks to the crisp, clear and direct action.  Although, it may not appeal to those facing a traffic-heavy commute. The manual model is also quicker to 100 km/h, cheaper and emits less CO2. Over 1,800 km, the trip computer indicated an average fuel consumption figure of 5.8 L/100 km. 1.2 L/100 km better than Kia’s claimed figure.

On paper, the competition seems to soundly thrash the Kia Sonet. It’s on the more expensive side in its vehicle class and appears to lack several luxury features that make the other three so appealing. As I said, facts and figures tell only half the story. The Kia feels like it should be competing in the class above. Everything, from the interior quality, ride and refinement, performance, economy, comfort and practicality, trumps its rivals. Yes, the low price of the Kiger might be appealing and the Vitara Brezza may be more fun to drive but, overall, the Sonet remains the best car in the segment simply because it does everything so well. Factor in the five-year/unlimited kilometre warranty and the four-year/60 000 km service plan and the Sonet just makes sense.

My chariot for the festive season, the @KiaSouthAfrica Sonet 1.5 EX. When I first drove the EX (CVT) it quickly became my favourite small crossover. Rides well, engine is refined (and economical) and has superb build quality. Loving this slick six-speed manual ‘box, too 👌🏽 pic.twitter.com/J1pTbVDsyR