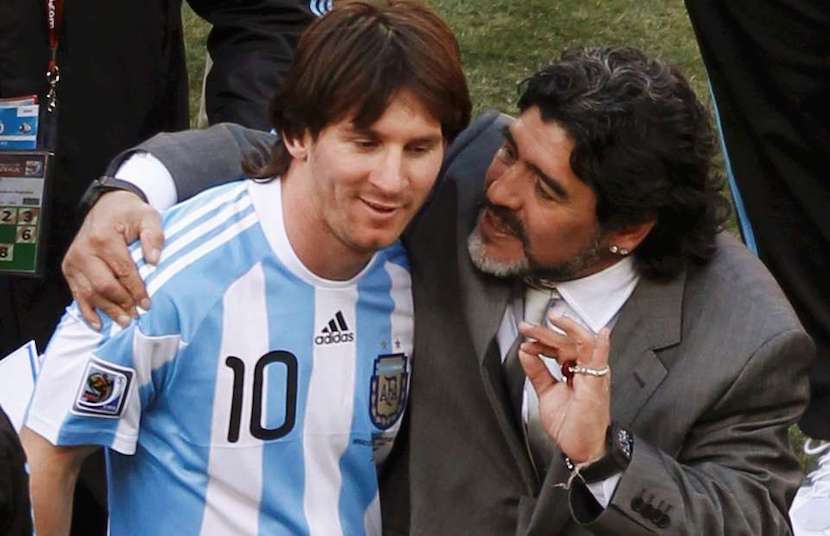 Argentine soccer icon Diego Maradona died recently aged 60 after suffering a heart failure. Considered one of the greatest footballers of all time, people from all over the world came together to bid him farewell. In his latest contribution, strategist and performance coach Rob Opie looks at the inspired story of two icons – Maradona and and his much younger compatriot Lionel Messi. Born decades apart, Opie says both players have a common purpose to ‘entertain, educate and enrich’ the world. Human greatness lies not in what you do – but why you do it. This is a message that Opie has extracted in SA rugby successes, with players motivated by the greater good of having a positive impact on the national psyche in representing their country. Do you agree with Rob? BizNews welcomes contributions from community members. – Lindiwe Molekoa

Maradona and Messi. An inspired story of two Argentine icons

What makes for human great – greatness defined by the achievement of all three Ss?

My belief is that human greatness lies not in what you do – but why you do it.

It’s having a sense of purpose in wanting to better the world – in your own way.

Here’s the story behind Maradona and Messi – born decades apart, yet both inspired by a common purpose to ’Entertain, Educate and Enrich’ the world at the level of great.

Some may say genius.

It was shortly after the Falklands war had ravaged an already frail economy.

His story, like that of so many great athletes, is one of using his innate and gifted physical talents to both shield himself from hurt and deliver himself from a life of adversity, poverty and struggle.

At age 10, he was diagnosed with a growth hormone deficiency. Due to his country’s economic collapse at the time, no one and no club, could afford to cover his medical bills.

As the Messi family had relatives in Catalonia, they sought to arrange a trial with Barcelona in September 2000.

Lionel Messi was just 13 when he was offered a makeshift contract on the back of a paper napkin to join the Barcelona Youth Academy.

Standing just 5 foot, 6 inches, who would have thought that he would go on to become one of the greatest footballers of all time ?

An icon inspired to Entertain, Educate and Enrich his home nation – and the lives of millions around the world.

Born on 30 October 1960, Diego Maradona, the fifth of eight children of a factory worker, grew up in the Villa Fiorito shanty town, on the southern outskirts of Buenos Aires.

At just 5 foot four inches in stature, Maradona also found himself playing for Barcelona by 1982. But, unlike Lionel Messi his stay at Barcelona was brief, curtailed by injury, sickness and controversial on the field incidents.

His sending off at the 1982 World Cup tournament in Spain, reflected on the turmoil he felt as his country fought the Falklands War.

But everything changed for him when he transferred to Napoli and helped them, as under dogs, to the Italian title twice – and creating a whole new set of adoring fans in the process.

Nothing however would match the pinnacle of his career when he led his home country to a World Cup triumph in Mexico in 1986.

This week one of his adoring fans reflected:

I was 20 when the 1986 World Cup was held, with all my family, and I cannot forget that moment he gave us, that moment of happiness. We had come out of a war in 1982, we needed some joy. Diego, like a hero with his team gave us that happiness, and on top of it all playing against the English, it really was unforgettable.

For many his off-pitch life overshadowed his football genius.

But, no one can argue that he did not Entertain, Educate (albeit in different ways) and Enrich the lives of millions.

He lived his life true to his purpose.

He lifted his country when they most needed it.

He will always be an icon of possibility for his fellow Argentines.