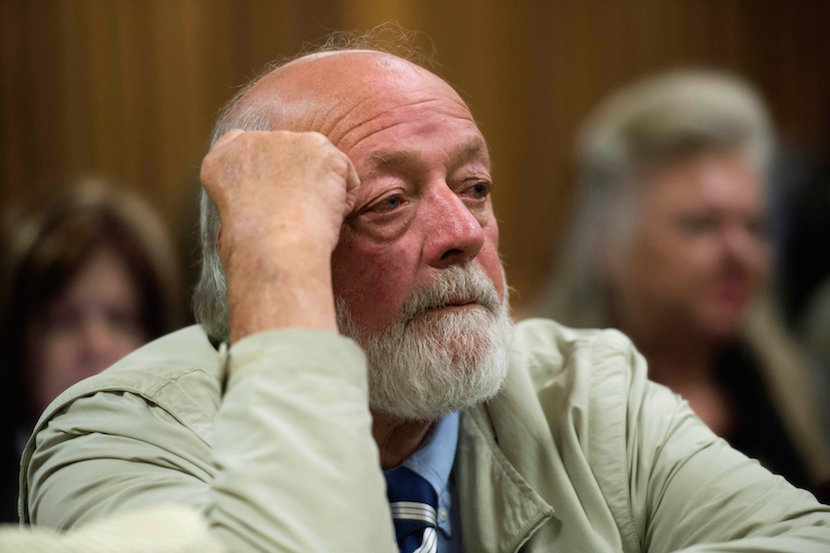 Little in life has come easy for Barry Steenkamp, father of the murdered Reeva. A trainer of thoroughbreds who struggled to make a living in the racing backwater of Port Elizabeth, Steenkamp was known in this tight knit community for his generosity and good humour. And, until she was killed by paralympic athlete Oscar Pistorius, his beautiful daughter Reeva. So to hear the 73 year old demand that the public see what Reeva’s body looked like after her killer’s bullets ripped into her is out of character. But it also provides an insight into unsaid things that can’t be raised in court. Before Reeva, Pistorius was best known within Steenkamp’s community for his brief involvement in a few horses, primarily as part owner of Potala Palace who won the country’s biggest race for two year olds on Durban July Handicap Day 2011. Few have much good to say about him. Either before Reeva’s death or now. – Alec Hogg

Pretoria – Reeva Steenkamp’s father Barry wants the world to see images of the injuries Oscar Pistorius inflicted on her when he shot her, the High Court in Pretoria heard on Tuesday.

“What I would like the world to see are the wounds inflicted on Reeva and the pain that she must have gone through, so that the world can see this and distract [sic] people who are thinking of this type of deed in future,” he said during arguments in aggravation of sentencing.

As he spoke, Pistorius’s uncle Arnold sat listening, shaking his head. During Pistorius’s trial, the court was shown a photo of Steenkamp’s head wound after Pistorius shot her through the door of his toilet on 14 February 2013.

Steenkamp said he wanted Pistorius to pay for murdering her. He would be prepared to meet with him at some point in future. Prosecutor Gerrie Nel led Steenkamp in giving evidence.

Steenkamp, 73, was one of four witnesses the court heard during sentencing proceedings for Pistorius on Tuesday.

His testimony about the effect his daughter’s murder had on him and his wife, June, caused their relatives and some people in the public gallery to cry.

Pistorius leaned forward and hid his face in his hands.  Steenkamp said he suffered a stroke. He told the court he listened to June crying at night and speaking to Reeva. He sat on his veranda at 02:00 or 03:00 most mornings, smoking.

#OscarPistorius what Roux is trying to demonstrate is that while OP had outbursts, they weren’t unreasonable in the circumstances. BB

He spoke of the anguish her murder had caused the family and how he thought of her all the time. At Christmas or on her birthdays they set a place at the table for her, with her photo.

“She must have been in so much fear, pain. That is what I think of all the time. I visualise it. I can see it myself. At times I thought, with the pain Reeva went through, I didn’t know if I was going mental. I took my diabetes injection and shoved it into my arms and stomach to see if I could feel the same pain,” Steenkamp said, his voice trembling as he made stabbing motions at himself.

The day began with Barry Roux, for Pistorius, calling Ebba Gudny Gudmundsdottir, from Iceland, to testify. She told the court how Pistorius befriended her family after her son was born without legs. At the Paralympic games in Manchester, he gave the boy his gold medal and told him “this is for you, champ”, which she said was a “very lovely gesture”.

The next witness for the defence was Pastor Marius Nel, of 3C Ministries, a Centurion-based church. Nel told the court several schools had asked for help in sports and fitness training.

Pistorius had expressed an interest and was excited about it, as were the schools’ principals and the church members.

The day’s final witness was Kgosi Mampuru prison’s assistant health manager and professional nurse Charlotte Mashabane. She testified how Pistorius became angry and ordered her out of his cell when she came to see him during her rounds on the morning of March 1, 2015.

Gerrie Nel persuaded Judge Thokozile Masipa to adjourn an hour early as he wanted to call his last witness, but did not want to risk having to keep them overnight.

He said the evidence would be emotional and could take 20 minutes, or 2 hours. He did not say who it was. Roux objected, saying Nel was wasting time and that he was resorting to “tactics”.

Masipa warned Nel that if the court ran over time on Wednesday, they would sit until they had finished. – News24