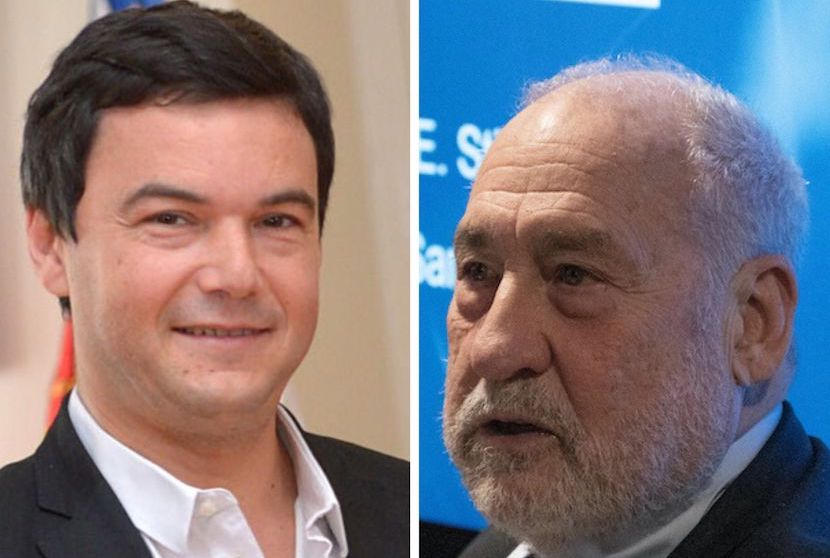 South Africans should start preparing themselves for a Wealth Tax. With a R500bn Covid-19 bill to be met, the idea of raiding wallets of the rich is gathering momentum globally. And given their idealogical leanings, South Africa’s ruling party politicians are sure to love solutions proposed by rock star economists Thomas Piketty and Joe Stiglitz, who are leading the charge for a hefty Wealth Tax to now be introduced. The duo are commissioners of the ICRICT – the Independent Commission for the Reform of International Corporate Taxation which has tax dodging multinationals, especially the tech titans, and super rich individuals in their sights. In this podcast, the rock star economists explain the why and how of what high income earners should expect to hit in the near future. Read the transcript or click on the play button to listen to their arguments . – Alec Hogg

Alec Hogg: If you’ve listened to any speeches from the South African government in the last five years, you’ll find that the word that is being focused on as far as the economy is concerned is inequality and opening up the economy in a way that everybody gets a fair shot at it.

The father of inequality theory, if you like, is Professor Thomas Piketty, a French professor at the Paris School of Economics who brought out a surprise blockbuster book called Capital, which sold two and a half million copies. The key finding in that book was the return on capital is growing quicker than the economy generally, so rich people will keep getting richer until they’re cut down to size by higher taxes. Piketty believes taxes for the super wealthy should be as much as 90 percent of their income.

What he believes is very important in a country like South Africa, because the economic policy in this country does follow very closely the suggestions of people like Thomas Piketty and another very famous economist, Professor Joseph Stiglitz, who is also focussing on the whole inequality question. Professor Stiglitz is a professor at Columbia University and a double Nobel Prize winner. In 2001 he won the Nobel Prize in economics and in 2007 he shared the Nobel Peace prize. Professor Stiglitz was the chief economist at the World Bank from 1997 to 2000 and chairman of the US Council of Economic Advisers under President Bill Clinton.

These two rock star economists were the headline acts of an organisation called ICRICT, which is the Independent Commission for the Reform of International Corporate Taxation, which held a press conference earlier this week. I went along, I listened for the full hour and pulled out some fascinating insights. The starting point is they want all companies to be taxed at least at a rate of 25 percent. Professor Stiglitz believes that the multinationals have gotten away with taxation murder for too long, and he’s got some pretty strong ideas on it.

Prof Joe Stiglitz: The big multinationals have devised ways of avoiding taxes through tax competition, a race to the bottom, taking advantage of tax havens and so forth. That distorted the economy. That meant the multinationals were getting away with paying lower taxes than small businesses. Local businesses were, and that distorts the economy. It was also unfair. Amongst these inequities and distortions, the largest were associated with the Internet companies.

Apple and Google famously were paying a fraction of one percent of their revenues in taxes in Ireland. And when Ireland got exposed, Apple moved to the Channel Islands.

So the point was they were committed to not paying their fair share of taxes. And that is what in some ways instigated this movement.

Alec Hogg: So ICRICT is a movement and ICRICT, according to Professor Stiglitz, is more needed now than ever before.

Prof Joe Stiglitz: The 2008 crisis made us more aware of the tax avoidance activities of the multinationals. And there was a desperate need for money in the aftermath of the 2008 crisis. Well, this is a hundred times worse.

Alec Hogg: A hundred times worse. Maybe he’s exaggerating for effect. But the reality is that the Covid-19 crisis is going to leave taxpayers with an enormous bill. So what’s next? Stiglitz is calling for 25 percent tax across the board around the world, starting with a digital tax, because he says it’s just logical.

And so the pattern of a disproportionate share of the increase in GDP and revenues and profits going to these companies has been exacerbated at the same time that we’re seeing small businesses, local businesses, having a very hard time, companies going to bankruptcy, these digital titans are doing very well. And part of their advantage is they’re not paying their fair share of taxes.

Because they’re so profitable, their marginal cost, their cost of operation, is so low that a tax on their overall revenues is close to a profits tax, a pure profits tax, which is not distortionary. So that’s why the proposals as an interim measure until we work out a whole global system of just having a digital tax, had a lot of resonance before the pandemic, but now becomes an imperative.

These are companies that were not paying their fair share before. They are the peak companies that have been the beneficiaries of this. It is an unfair system that is distorting our economy, hurting job creation, hurting the recovery. It makes an awful lot of sense to have part of the tax reforms focus on these digital firms as part of the agenda of both the tax reform and raising the revenues that we’re going to need to get out of this crisis.

Alec Hogg: Squarely in the target are the FAANGS – Facebook, Apple, Alphabet, Netflix, Google and other companies like them. But every time there’s been suggestions that these tech giants should be more harshly treated, there’s been a threat of retaliation from the United States.

Prof Joe Stiglitz: The issue of retaliation in today’s world is a difficult problem. My own feeling is that probably in November there will be a new Administration in Washington that will believe in a rules based international system. And part of that rules based international system is going to be tax cooperation. You can’t have a world where you retaliate whenever you let some country does something you don’t like.

In particular, what we’re talking about here is an international framework where we’re imposing taxes, where the economic activity occurs. And part of what we’re talking about in the digital tax is the tech economic activity, it will only be imposed, for instance, on goods bought through Amazon or some other digital company in for instance Brazil, advertising that is paid for by companies in Brazil. There’s an important part of the activity occurring in Brazil, it’s not like Brazil is taxing activity that has nothing to do with Brazil. We should be moving towards an international framework. And that’s what ICRID has been advocating since its founding.

Alec Hogg: So what Professor Stiglitz is telling us, is a 25 percent across the board tax on companies like Apple, Amazon, Netflix, Facebook and other digital giants who are paying very little tax at the moment will help especially developing countries to fund their recovery by clawing back profits that are made in their countries by these digital giants. Thomas Piketty, on the other hand, thinks that’s just the starting point and it doesn’t go quite far enough.

Prof Thomas Piketty: I think it’s really important to realise that corporate taxation alone is not enough. It has to be integrated to work through a more comprehensive system of individual level taxation and in particular, individual level progressive taxation of income and wealth.

Alec Hogg: Income and wealth. And he proposes up to 90 percent of the income generated by the super rich. He really wants to see a wealth tax as well. During the Democratic Party primaries in the US, Prof Piketty had two disciples in Elizabeth Warren and Bernie Sanders, both saying that wealthy people in the United States should be paying six to eight percent of their asset base as a Wealth Tax.

Prof Thomas Piketty: The case for a Wealth Tax was already very strong before the pandemic but I think it does become even stronger since. The public discussion about Wealth Tax was already changing a lot in the recent years. The US political debate in the Democratic primary raised a lot about the idea of creating a progressive Wealth Tax. It’s very striking to see that it’s actually a very popular idea in the electorate, not a means a Democratic electorate, but also the Republican electorate.

I think Joe Biden (the Democratic Party’s Presidential nominee) will be well inspired to borrow some of the ideas that were pushed by Elizabeth Warren and Bernie Sanders in this area.

But it’s not only in the US. In Germany it’s very striking to see that the Social Democrats are now pushing the Wealth Tax as an important part of their platform together with other political parties and so the debate in Germany, the US, in Britain and France has been changing around.

The bottom line is that at a time when we are going to have to pay for a new investment in a hospital system and the public services, and we are going to have to deal with a very large public debt, the view that nobody will have to pay for anything which some politicians are not trying to push, is simply not credible. In the short run, you can do away with debt. But at some point what history tells us is that we have to do something with debt. In historical circumstances, with very large public debt there are not so many ways to deal with that.

Alec Hogg: It’s not surprising that Thomas Piketty refers to history because he has just brought out an eleven hundred page book which has a look at the history of inequality.

Prof Thomas Piketty: This actually worked pretty well after World War Two. Germany and Japan in particular used a very large exceptional Wealth Tax, over 50% of those very high financial wealth portfolio in Germany was taxed, 50% of the stock and not a lot of income flow. In Japan, it was 70, 80%. It was not easy. It was a complicated political fight at the time and I’m not saying things are going to happen this way again.

But, in the end, if you look retrospectively at these episodes, this was a huge success because it allowed these countries, to get free very quickly after the very high level of public debt, over 200 percent of GDP at the end of the 1940s after World War Two, and in the space of five to 10 years, they were able to basically get rid of that without the bad impact of inflation, which, of course, Germany had experienced in the 1920s, which is probably why they invented this better system in the 1950s.

So today we are in a different environment, but the important lesson from story is that we have an unknown crisis, the likes of which we’ve never seen, with a complete lockdown and shutdown of the economy. We have to invent new solutions. And I think a more equitable tax system will have to be part of the solution.