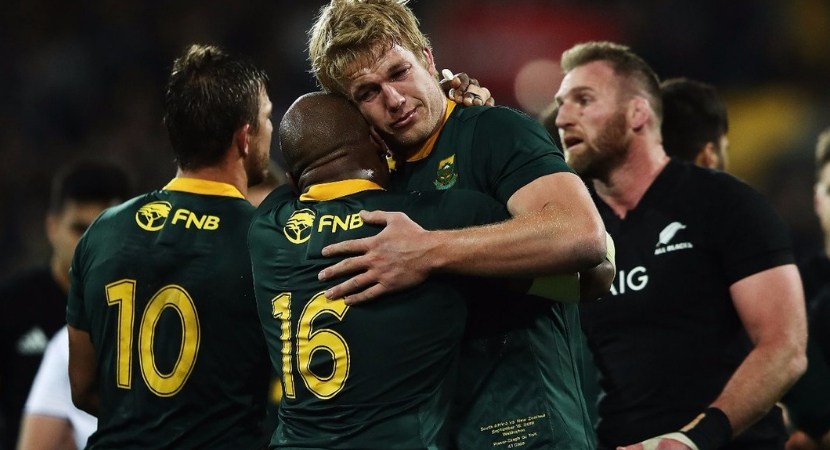 JOHANNESBURG — Based on the match statistics, the Wellington Test match should have been dominated and won by the All Blacks. They scored more tries (6-5), carried the ball further (633m-245m), strung together more passes (234-61), executed more offloads (17-3), and had more possession (75.3%-24.7%). Based on the match statistics, the Springboks should have been demolished. They conceded more penalties (10-3), got more yellow cards (1-0), lost more lineouts (9-6), lost more scrums (13-7), and had to tackle five times more than their opponents (226-46). Yet from the 25th minute onwards they led the match despite being unable to add to their points tally for the final 24 minutes. So what made the difference? The tears of joy shed by an exhausted Pieter-Steph du Toit at the final whistle told the story. He had done the work of three men with his brute strength in attack and defence until there was nothing left in the tank. It was all about guts and determination, and not a single player could be found wanting. The All Blacks pinned some blame on referee Nigel Owens for not blowing the Bok backline offside in the agonising final minutes, but their uncharacteristic knock-ons, indecisive play, Beauden Barrett’s poor kicking performance, and their inability to deal with the ferocity of the Bok defence doomed them to a rare defeat. Suddenly the storm clouds gathering around Rassie Erasmus’s tenure parted and the sun shone once again on the Boks. The return fixture at Loftus Versfeld on 6 October is nicely poised. – David O’Sullivan

SA Rugby’s Director of Rugby, Rassie Erasmus, and Springbok captain Siya Kolisi lauded the self-belief and courage of the team after the South Africans scored an epic victory over the All Blacks on Saturday morning (SA time) in Wellington.

The Boks rallied back from 12-0 down to beat the world champions by 36-34 in front of a capacity crowd at the Westpac Stadium in the Kiwi capital. It was the most points the All Blacks have ever conceded in New Zealand and South Africa’s first win in New Zealand since 2009.

Erasmus said the players deserve special praise for their courage on defence and execution of the game plan. The home team dominated possession and territory and forced the Boks to make more than 200 tackles during the game.

“The boys showed guts and I’m so glad for them,” said Erasmus.

“We will take this win over the best team in the world and enjoy it, but we will keep our feet firmly on the ground. We will not get ahead of ourselves. We still have a lot of work to do and the All Blacks will be fuming when they come to Pretoria (on 6 October).”

Kolisi said the win was special, given the many in-game challenges the team had to face during the match. Both starting centres, Damian de Allende and Lukhanyo Am, left the field with shoulder injuries, while Willie le Roux (fullback) spent 10 minutes in the sin bin after he was yellow carded.

“We kept our focus and we really had belief,” said Kolisi.

“We wanted to look each other in the eye and said we did the best that we could against the best team in the world.

A job very well done by our Springboks for the fierce fight and victory against the tough All Blacks. The determination you demonstrated today, away from home, is beyond fulfilling. Our team showed true character from start to finish. Continue to fly the flag, you make us proud. pic.twitter.com/5LKH0g7FAj

“The boys did just that and I’m so proud of all of them. Coach Rassie and the other coaching staff did an excellent job to prepare us for this Test after we lost the previous two.

“It’s a special win, a special day and I’m so proud of the guys and just glad we could make South Africa proud again.”

Le Roux scored on of the Boks’ five tries, while Aphiwe Dyantyi (wing) bagged a brace. Malcolm Marx drove over from a lineout maul and Cheslin Kolbe scored his first try in the Bok jersey from an intercept. Handré Pollard converted four and added a crucial penalty goal.